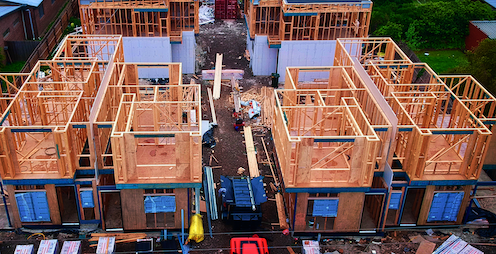 Each side is offering something for first homebuyers this election, but the nature of the support is quite different.

The Coalition is promising to expand its Home Guarantee Scheme[1], also known as its First Home Loan Deposit Scheme[2]. It’ll lift the number of places on offer from 10,000 to 35,000 per year, and reserve another 5,000 places for single parents.

The scheme enables buyers with deposits as small as 5% (2% for single parents) to avoid paying the mortgage insurance that is normally required for deposits of less than 20%. The Commonwealth “guarantees[3]” the other 15% to 18%.

The guarantee is not a cash payment or a deposit.

Labor’s scheme, announced on Sunday is called Help to Buy[5] and owes something to work done by the Liberal Party’s Menzies Research Centre[6] in 2003 for then Prime Minister John Howard.

Labor’s scheme will offer 10,000 homebuyers the opportunity to share ownership with the Commonwealth which will put in up to 40% of the purchase price for a new home, and up to 30% for an existing home.

The United Kingdom[8] has offered such a scheme for decades, as do state governments in Western Australia (Keystart[9]), South Australia (HomeStart[10]) and Victoria (Homebuyer[11]).

The report commissioned by Howard in 2004[12] found shared ownership “as critical to the welfare of Australian families today as was the emergence of the mortgage market at the turn of the last century”.

A report produced by the Grattan Institute[13] in 2022 found that while it might cost the government money in the short-term, it might save it money on rent assistance longer term if it got more Australians into home ownership.

Despite many attractive features, shared ownership has remained niche worldwide due to its complexities. In the UK, fewer than 1%[14] of households use it.

But shared ownership is complicated

In Labor’s scheme, the Commonwealth wouldn’t charge the owner rent on the portion of the home that it owned, while the owner would be responsible for ongoing costs such as rates and other bills. When the home is eventually sold the Commonwealth will get its money back plus its share of the capital gain.

As in the United Kingdom, at any time the owner can “staircase[15]”, buying more of their property from the Commonwealth, although if prices have risen since the initial purchase, the cost of buying further shares will have also risen.

Read more: Solutions beyond supply to the housing affordability problem[16]

If the homebuyer’s income exceeds the Help to Buy threshold for two consecutive years, they will be required to repay the government’s financial contribution in part or whole as their circumstances permit.

In other such schemes, owners face restrictions on their freedom to renovate and sub-let their properties. They can also pay more for their mortgages, as not all lenders offer their most competitive loans for such schemes.

First Home Loan Deposit Scheme to continue[17] Regardless of which party gets elected, the Home Guarantee[18] scheme will continue (with more places under the Coalition). While escaping the cost of mortgage insurance offers buyers a leg up the ladder, most may be close to being able to buy a house without it, meaning it might simply bring forward[19] home purchases rather than assisting people unable to buy. While the Home Guarantee scheme focuses on the deposit hurdle, Labor’s Help to Buy scheme will help with both deposits and repayments. Such schemes are complex. Participants will need to read the fine print to ensure that they are prepared to accept the complications that might arise later. Labor is also promising a National Housing Supply and Affordability Council[20] and a Housing Australia Future Fund[21] to build more social and affordable housing. Read more: $1 billion per year (or less) could halve rental housing stress[22] In truth, we can’t really hope to make a dent in the housing affordability crisis without hard policy choices such as reforming tax concessions that have pushed up house prices. Labor put forward such measures in 2019. It isn’t this time. References^ Home Guarantee Scheme (www.liberal.org.au)^ First Home Loan Deposit Scheme (www.nhfic.gov.au)^ guarantees (www.nhfic.gov.au)^ $30,000 (www.yourmortgage.com.au)^ Help to Buy (www.alp.org.au)^ Menzies Research Centre (web.archive.org)^ Older women often rent in poverty – shared home equity could help (theconversation.com)^ United Kingdom (www.tandfonline.com)^ Keystart (www.keystart.com.au)^ HomeStart (www.homestart.com.au)^ Homebuyer (www.sro.vic.gov.au)^ Howard in 2004 (web.archive.org)^ Grattan Institute (grattan.edu.au)^ 1% (commonslibrary.parliament.uk)^ staircase (www.gov.uk)^ Solutions beyond supply to the housing affordability problem (theconversation.com)^ First Home Loan Deposit Scheme to continue (www.nhfic.gov.au)^ Home Guarantee (www.nhfic.gov.au)^ bring forward (www.ceda.com.au)^ National Housing Supply and Affordability Council (www.abc.net.au)^ Housing Australia Future Fund (www.alp.org.au)^ $1 billion per year (or less) could halve rental housing stress (theconversation.com)Authors: Rachel Ong ViforJ, ARC Future Fellow & Professor of Economics, Curtin University