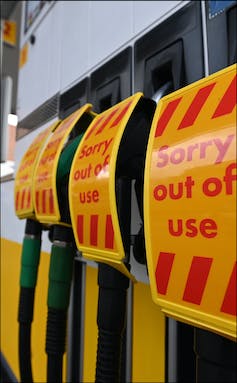 Far from emerging from the COVID shock awash with fuel, as might be expected after an economic slowdown, the world is entering a new energy crisis the like of which hasn’t been seen since the 1970s.

European and Asian gas prices are at an all-time high, the oil price is at a three-year high, and the price of coal is soaring on the back of energy shortages across China, India and Germany.

The surge in demand is being driven mostly by recovering economies and anticipated extreme weather across Europe and north-east Asia. China is stockpiling domestic coal and gas reserves, and Russia is reluctant to supply gas to Western Europe.

Closer to home, Australia’s gas prices are soaring, but might soon plummet.

In Britain, a shortage of the truck drivers who move fuel has led to panic-buying amid fears of a shortage. After Brexit, many European truck drivers went back to their home countries and never returned.

British fuel pumps are out of order. EPA

Compounding Britain’s problem was its so-called “windless summer” in which renewable power production was much lower than normal. This put a significant strain on electricity generation as around 40% of its power is produced by wind.

Britain has transitioned away from coal as an electricity source and with low emergency supplies will find it difficult to suddenly switch back to coal.

Prime Minister Boris Johnson remains committed to wind generation and says he wants the UK to become the “Saudi Arabia of wind power” with offshore wind farms generating enough electricity to power every UK home within a decade.

Oil on a roll

Oil prices have soared in response to the windless summer and British and German difficulties in getting access to Russian gas. Those increases will soon hit Australia which imports 80% of its petrol, diesel and jet fuel.

OPEC+ (OPEC and a Russia-led group of oil producers) have agreed to boost production, but only in measured steps.

If and when Britain and Germany resolve their gas supply issues with Russia, perhaps by mid-2022, gas and oil prices will slide.

Read more: No, Barnaby. The UK energy crisis has nothing to do with its net-zero target, and to suggest otherwise is outrageous[1]

This will put severe pressure on Australia’s 20 to 30 lucrative long-term supply contracts with Japan, South Korea and Taiwan which expire in a few years.

It is possible that other nations in the Indo-Pacific investing heavily in their gas infrastructure, such as Vietnam and India, will pick up the slack.

The crunch in the gas market is forcing countries to revert to coal for electricity generation and for industry. Thermal coal prices in Asia keep hitting record highs.

In Asia, there isn’t enough coal to meet expected demand. A cold winter followed by a hot summer and stronger economic growth has led to greater Chinese demand. It is the main cause of an emerging electricity crisis[2] in China.

China, which eased up on coal consumption a few months ago to meet emission targets, is back in the market as stockpiles run low. India faces a similar predicament as coal stockpiles are running low.

There is speculation China might do a U-turn[4] on its unofficial ban on Australian coal and once again embrace Australian imports.

In Europe, the early closure of nuclear plants and record gas prices are set to boost coal use. The price for thermal coal is hitting record highs in Europe, and in Australia the price of Newcastle coal is up 250% and close to its 2008 record high[5].

The crisis suggests the transition to renewables will take longer than expected and be more complicated than expected.

It will cast a shadow over the COP26 UN climate change talks due to begin in Glasgow on October 31.