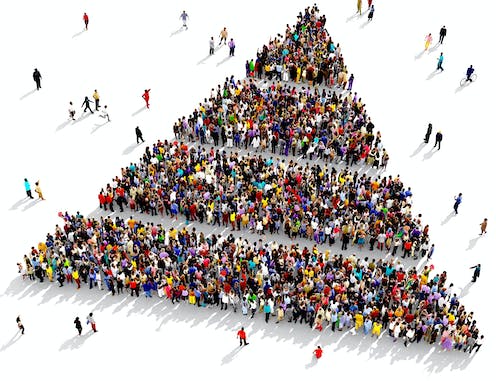 The benefits of social mobility seem to be widely agreed on. The idea that a person’s opportunities and earnings should not be defined by their background is supported across the political spectrum.

Despite this, attempts to make society more mobile and to equalise opportunities have proved to be frustrating[1] and complex. And nor is it easy for the people who do achieve this goal.

Our research[2] suggests that people who move away from their roots can find the experience challenging. This is especially true if colleagues and employers are not supportive.

Employees across a range of occupations spoke to us about their experiences of social class during childhood, at work, and at home. Those who had “benefited” from social mobility said they often found it difficult to adjust.

Some felt under pressure to change mannerisms, adjust their accents and conceal behavioural habits to fit into a workplace where class differences were prominent. As one person in our study told us: “The [work] culture is very middle class, where it might be that you can quote Latin, that you drink wine rather than beer, that you socialise in a certain way.”

Others who had been socially mobile described instances at work where they had been ridiculed for background, had their professionalism questioned, and regularly suffered discriminatory microaggressions. One participant recalled: “[A colleague] made a formal complaint about me, saying I was unprofessional, and he actually used the words, ‘How can she meet anyone speaking like that?’”

I get mocked. it’s not a regular thing, but I don’t hide the fact I’m [working] class. There’s kind of a joke that I have progressed quite a lot from [where] my class suggests I should be.

As a result, some said they tried to conceal their background by avoiding social situations, staying quiet in meetings, and even leaving their roles. One explained: “I didn’t feel as if I fitted in at all. I felt completely uncomfortable there, as they were a different type of people totally.”

She added: “I felt very lonely and just couldn’t face working there any longer, so I resigned”

We also found that the socially mobile encountered similar problems in their social and personal lives. Some felt the need to hide their social mobility when at home by adjusting their accent and vocabulary or avoiding discussions of work.

One explained: “If I’m home, then I’m speaking differently, and I do it because I’ve got a lot of friends who probably didn’t get the [same opportunities] and I want to melt back in with them.”

One participant told how he had even detached from family relationships because of his social mobility. “I don’t think I fit in with my dad’s family anymore,” he said.

Many socially mobile employees felt they had to act all the time, constantly shifting their behaviours to fit in at home and work. One admitted:

You feel insecure and a little bit at sea. I just thought, ‘I’m inadequate’. It’s tarring because you’re aware of it and looking out for it and you’re never utterly secure in any situation, including the one you left.

In comparison, we found that people who had remained within the social class of their childhood found the process of moving between work and home reasonably effortless. They felt more secure and authentic in both environments. One commented: “I don’t conceal my background or social class as I think I can just speak how I am.” Another agreed: “I’ve never felt uncomfortable about my background.”

While our research suggests numerous difficulties for socially mobile employees, we also found that their range of life experiences provided them with important skills. One participant remarked:

I think I’m quite a social chameleon in the fact that I’ve got a very working-class background, but I went to a grammar school and university. I do find that useful, that I’ve had those different bits in my life which means I know how to talk to people.

Employers who recognised the interpersonal skills that socially mobile employees bring to the workplace, and encouraged them to be themselves were perceived as more supportive. Some even provided opportunities for staff to build connections with people from similar backgrounds.

So although levelling up can be quite a stressful experience, employers and colleagues who celebrate class differences can go a long way to improving the situation. As one participant, who said their employer valued competence over class told us: “I’m good at the job I do and I don’t need to conceal my class because I have other attributes, rather than being well-spoken, which can get me progression.”