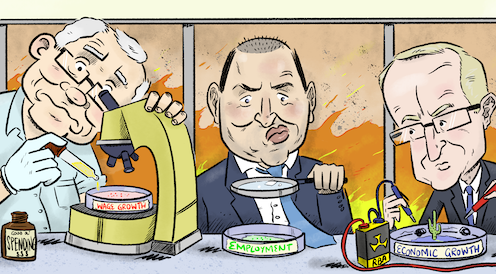 2020 is shaping up as a dismal year for the economy, with no progress on many of the key measures that matter for Australians.

Unemployment will stay above 5% and probably rise rather than fall.

Economic growth will continue to have a “1” in front of it, instead of the “2” or “3” that used to be common, and living standards will grow more slowly.

Wage growth, forecast in the budget to climb to 3%, will instead remain stuck near 2.2%, where it has been for half a decade.

Read more: We asked 13 economists how to fix things. All back the RBA governor over the treasurer[1]

Those are the central forecasts[2] of a panel of 24 leading economists from 15 universities in six states assembled by The Conversation to review the year ahead, a year they expect to be marked by one only more interest rate cut, more modest growth in house prices, and a return to slower growth in the share market.

The panel comprises macroeconomists, economic modellers, former Treasury, IMF, OECD, Reserve Bank and financial market economists, and a former member of the Reserve Bank board. Combined, their forecasts are more likely to be correct than those of any individual member. One-third are women.

They expect the long-promised budget surplus to all but disappear as a result of responses to the bushfires and weaker-than-predicted economic growth.

The Treasury believes the Australian economy is capable of growing at a sustained annual pace of 2.7%[3], but it hasn’t grown that fast since mid-2018. Growth slipped below 2% in March 2019 and hasn’t recovered. It now has been below 2% for three consecutive quarters[4], the longest period since the global financial crisis.

The panel’s central forecast is for economic growth to stay at or below 2% for at least another year, producing the longest period of low economic growth since the early 1990s recession. The average forecast for the year to December is 1.9%.

Panellist Saul Eslake says it will be the result of persistently slow growth in household disposable incomes, reflecting “very slow growth in real wages, the increasing proportion of gross income absorbed by tax, and weakness in property income (interest and rent) as well as (at the margin) the impact of the drought on farm incomes”.

One of the best measures of overall living standards (the one the Reserve Bank watches) is real net national disposable income per capita, which takes better account of buying power than gross domestic product does. In the year to September it climbed an unusual 3.3%, pushed up by a resurgence in iron ore export prices.

The iron ore price has since slid from US$120 a tonne to around US$90 a tonne, and the panel’s average forecast is for it to fall further.

As a result it expects growth in living standards to slow to 2.4% in 2020, a result that will still be better than between 2012 and 2016 when a dive in export prices sent it backwards.

Read more: Why we've the weakest economy since the global financial crisis, with few clear ways out[5]

Growth in nominal GDP, the raw total unadjusted for inflation, is also expected to slow, slipping from 5.4% to 4.4% as export prices weaken, producing a decline in revenue growth the government has already factored in to the budget.

The unemployment rate is expected to end the year near the top of the 5%-to-5.5% band it has been stuck in for the past two years, rather than falling to the 5% forecast in the budget or towards the 4.5%[6] the Reserve Bank believes is possible.

Only one of the panel, Warren Hogan, expects the unemployment rate to end the year below 5%.

The panel’s central forecast is for inflation to remain below the bottom of the Reserve Bank’s 2-3% target band, where it has been for most of the past five years.

One panellist, Margaret McKenzie, breaks ranks. She expects the drought and bushfires and floods to sharply push up the cost of food and essential items including energy, quickly pushing inflation into the range the authorities have long wanted, but not for the reasons they wanted.

“I don’t think people have thought about it, because there hasn’t been inflation for so long,” she says. “The problem is that the fires are likely to contract an already weak economy, impelling the Reserve Bank to cut interest rates further, even though its inflation targeting regime would tell it not to.”

Wage growth is forecast to be well below the highest inflation forecast and only a little above the central forecast, resulting in continued low real wage growth and seeing the budget miss its wage growth target for the eighth year in a row.

Household spending barely grew in the year to September, inching ahead by a shockingly low 1.2%, the least since the financial crisis, and not enough to account for population growth.

The panel’s central forecast is for a recovery in spending growth to a still-low 2.4%, with spending held back by low consumer confidence and what former Organisation for Economic Co-operation and Development director Adrian Blundell-Wignall calls a “sense that we are living on borrowed time”.

Read more: GDP update: spending dips and saving soars as we stash rather than spend our tax cuts[7]

“China is slowing, bank-financed housing has been pushing the envelope and is very expensive, and the governments have never had a plan for the next phase of sustainable growth,” he says. “This perception of no confidence in the government has not been helped by the bushfire events.”

There are few signs of a recovery in business investment, notwithstanding record-low interest rates.

The panel’s average forecast is for investment by mining and non-mining companies to grow by only 1.7% and 1.9% in 2020, which will represent a turnaround for mining, in which investment fell 11.2% in the year to September.

Financial markets should provide less support to households in the year ahead, with the ASX 200 share price index expected to climb only 6.4% after soaring 20% in the year just ended.

None of the panellists expect last year’s growth to continue.

The Australian dollar is expected to end the year at 68 US cents, close to where it is at present. The iron ore price is expected to fall to US$75, a smaller slide than was assumed in the budget.

Housing investment (homebuilding) is expected to stabilise in 2020, falling only slightly from here on, after sliding 9.6% in the year to September 2019.

Sydney and Melbourne home prices are expected to continue to recover, growing by 5% in 2020.

Panellist Nigel Stapledon says the higher home prices will in time boost perceptions of wealth, opening up the possibility that consumer spending will “surprise on the upside”.

The panel’s central forecast is for only one more cut in the Reserve Bank’s cash rate this year, in the first half, followed by no further cuts in the second half. This would allow the bank to avoid so-called unconventional monetary policy or “quantitative easing” in which it forces down longer-term rates by buying government and private bonds, an option Governor Philip Lowe said it would only resort to after it had cut its cash rate to 0.25%.

The single cut would take the cash rate to an all-time low of 0.5%. In anticipation the ANZ cut its online saver account rate from 0.1% to 0.05%[8] on Thursday.

Read more: Now we know. The Reserve Bank has spelled out what it will do when rates approach zero[9]

The cut could come as soon as next week when the board holds its first meeting for the year on February 4. Governor Lowe has scheduled an address to the National Press Club for the following day[10].

Most of the panel think quantitative easing will not be needed and many question its effectiveness, saying the government could achieve much more by fully abandoning its commitment to surplus in order to stimulate the economy.

The panel expects the government’s 10-year bond rate to remain historically low at 1.3%. That makes it about as cheap as it has ever been for the government to borrow for worthwhile purposes.

Treasurer Josh Frydenberg has abandoned his absolute commitment to return the budget to surplus this financial year, saying his first priority is “meeting the human cost of the bushfires[11]”.

The panel’s average forecast is for a bushfire-ravaged $2.2 billion.

Most of the panel believe that with good management the government can avoid a recession for another two years, propelling the Australia economy into what will be its 30th straight year of expansion.

On average they assign a 27% probability to a recession within the next two years, down from their average forecast of 29% in June.

Several point out that, whereas the main risks to continued growth come from overseas, China appears to be managing its slowing economy better than expected, although the emergency triggered by the new and deadly Wuhan coronavirus[12] might change that.

Among those who do fear a home-bred recession is Julie Toth who has lifted her estimate of the likelihood of a recession from 25% to 50%, saying growth is already so weak that it won’t take much to send it backwards.

“The bushfire disaster presents the real and immediate possibility of two quarters of negative growth for the fourth quarter of 2019 and the first quarter of of 2020,” she says.

“Even if disaster relief and fiscal stimulus are delivered swiftly, resource constraints (a lack of skilled tradespeople, water, equipment and appropriate building materials) mean reconstruction will be very slow.”

The panel began compiling its responses when the bushfires weren’t as bad as they subsequently became and before the emergence of the Wuhan coronavirus.

It delivered its final forecasts on January 20 when the worst of the bushfires appeared to have passed but before the coronavirus had spread[14] to Australia.

The effects of both won’t be known for some time.

2020 is turning out to be a year of uncertainty, as well as low expectations.

Read more: Buckle up. 2019-20 survey finds the economy weak and heading down, and that's ahead of surprises[15]