With more countries considering joining the Comprehensive and Progressive Agreement for Trans-Pacific Partnership (CPTPP[1]), New Zealand urgently needs a real public debate on the future of such trade and investment agreements.

In February this year the UK formally applied[2] to join as part of its quest for post-Brexit free trade agreements. Reportedly, Thailand[3], South Korea[4], the Philippines[5], Taiwan[6] and even China[7] are to varying degrees considering membership.

Coverage of these developments is often overly simplistic, treating expansion as a notch in the belt for those who see the CPTPP as shaping the 21st century’s global trade rules.

Behind the headlines, the reality is more complex. Given the CPTPP restricts governments’ ability to regulate their own economies in return for notional benefits, it warrants closer scrutiny from all sides.

Blueprint for a neoliberal trade agenda

The original TPPA was always intended as a blueprint for future trade relations across the Asia-Pacific region (with the now-abandoned Transatlantic Trade and Investment Partnership proposing similar rules for US-EU trade).

New Zealand was primarily committed to the TPPA as an opportunity to secure a free trade agreement (FTA) with the United States, regardless of the costs.

Read more: Australia has a great chance to engage in trade diplomacy with China, and it must take it[9]

Despite vociferous public protest[10] against its potential to erode national sovereignty, which forced discussion out of the shadows, the National government signed the TPPA anyway.

The Labour, New Zealand First and Green parties all opposed its ratification in the select committee, as did Māori in the Waitangi Tribunal. National ignored them again, ratifying the text in May 2017. 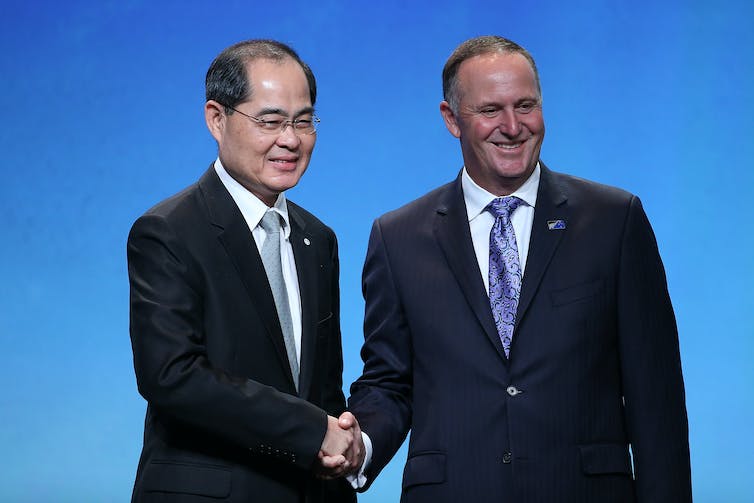 Labour does a U-turn

Before the 2017 election, with the TPPA’s public support in tatters, the Labour Party was keen to paint itself as part of the increasingly popular movement against corporate-led globalisation.

Its minority report to the select committee[11] noted:

The Labour Party wishes to protest in the strongest terms at the government’s failure to effectively represent the long-term interests of New Zealand in the Trans-Pacific Partnership negotiations.

And yet when the incoming Trump Administration stepped back[12] from the TPPA in early 2017, Labour turned cheerleader for a slightly modified CPTPP agreement.

In government Labour argued the necessary changes had been made to make the agreement acceptable, but in reality hardly anything had changed.

Read more: What American farmers could gain by rejoining the Asia-Pacific trade deal that Trump spurned[13]

A few provisions, mainly on intellectual property rights, were suspended[14] but not withdrawn, while a series of side letters of questionable legal value[15] meant investors from Australia and Peru could not challenge New Zealand laws or decisions directly in dubious offshore tribunals.

But investors from other parties to the CPTPP – Japan, Singapore, Brunei, Malaysia, Chile, Canada and Vietnam – could still bring controversial investor-state disputes.

What’s more, the Labour government never withdrew ratification of the TPPA, and rolled out the same economic modelling[16] it had previously stridently criticised to justify its new-look CPTPP. 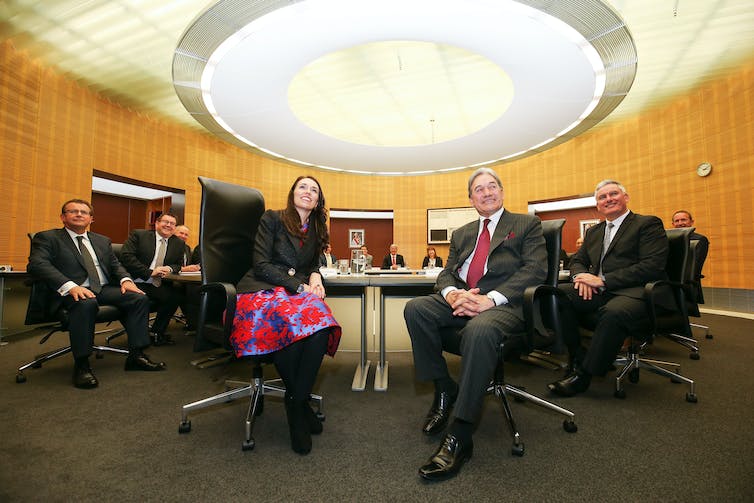 On the same side: Prime Minister Jacinda Ardern and deputy Winston Peters at a cabinet meeting after forming a coalition government in 2017. GettyImages

What’s in it for New Zealand?

Countries wanting to join the CPTPP need agreement from existing parties, one by one. Each of the 11 member countries can extract a price beyond what is already in the CPTPP.

That level of bargaining makes it extremely difficult to secure new exemptions or concessions, or even equivalent protections for regulation of investments, services or government procurement contracts in the agreement’s various schedules. In reality, countries wanting to join will have to give a lot more.

New Zealand, for example, has described a bilateral free trade agreement as a “stepping stone” to the UK joining the CPTPP. What price will New Zealand demand? More market access[17] for agriculture (despite the recognised need to diversify the economy and markets) and no investor-state disputes.

The UK wants fewer limits[18] on its financial and professional services firms, stronger intellectual property rights for its pharmaceutical, manufacturing and media industries, more access to government procurement, inclusion of investor-state dispute settlement or an equivalent, and more.

Read more: Corporations prepare to sue over action to save lives as pandemic reveals trade flaws[19]

Why would New Zealand make such a deal? Because of the bipartisan belief that more free trade agreements are always better, regardless of the evidence showing they compound the risks to regulatory sovereignty.

Why would the UK put itself through this? Partly because its political leaders and trade officials are driven by the same ideology. Partly because it needs to show it can replace EU membership with other “special relationships”.

Ironically, Brexit was sold as restoring UK sovereignty, whereas the CPTPP would take even more of it away. But the familiar veil of secrecy prevents scrutiny and an objective cost-benefit analysis.

What about the likes of Thailand, the Philippines or South Korea? All three already have multiple FTAs with most CPTPP parties.

New Zealand, for example, has an FTA with South Korea[20], which is also a party to the Regional Comprehensive Economic Partnership (RCEP[21]) just signed this year. The Philippines is a party to the New Zealand-Australia FTA with ASEAN and the RCEP. New Zealand has a bilateral FTA with Thailand[22] as well.

It’s hard to imagine why those countries would give New Zealand greater market access than they were prepared to already, especially in the RCEP, and accept the CPTPP’s more onerous restrictions on their domestic policies and laws. Yet reports suggest they are eager to engage in this Faustian bargain.

The CPTPP risks becoming another merry-go-round in the largely secretive circus of free trade agreements. Countries seem willing to climb on board without prior public scrutiny or any compelling rationale.

It’s time to pull back the curtains and have an open and honest debate about the kind of trade relations New Zealand and other nations really need for the 21st century.