This is the first in a three-part mini-symposium on Wages, Unemployment and Underemployment presented by The Conversation and the Academy of the Social Sciences in Australia.

The long debate over the causes of wage stagnation took an unexpected turn last week, when Finance Minister Matthias Cormann described (downward) flexibility in the rate of wage growth as “a deliberate design feature of our economic architecture[1]”.

It was a position that was endorsed in a flurry of confusion 16 seconds after it had been rejected[2] by Defence Industry Minister Linda Reynolds.

Cormann had said policies aimed at pushing wages up could cause “massive spikes in unemployment”.

The ease with which Reynolds was trapped into at first rejecting and then accepting what her ministerial colleague had said flowed from the fact that Cormann had broken one of the standing conventions of politics in Australia, and for that matter, the English-speaking world.

For more than forty years, both the architecture of labour market regulation and the discretionary choices of governments have been designed with the precise objective of holding wages down.

These policies have been quite successful, as can be seen from the graph.

However, at least until recently, there has been bipartisan agreement on at least one aspect of them – that no one should mention their role in holding back wages. 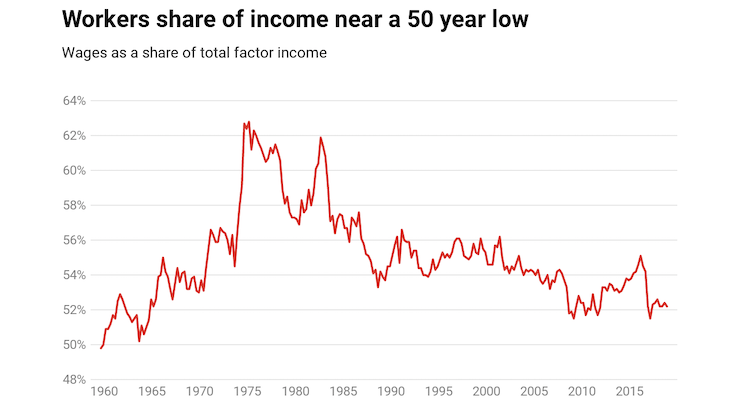 ABS Australian Accounts, seasonally adjusted[3] Instead, the decline in the wage share of national income has been variously blamed on technology immigration imports from China and, more recently, the end of the mining boom. None of these explanations stand up to scrutiny. The idea that technology is driving the wage share down is perhaps the most popular. But technological change has been continuous, if uneven, since the beginning of the Industrial Revolution in the 18th century. Most of the time, workers have shared in the resulting productivity gains. There have however, been a number of exceptional periods in which workers have been harmed. They have been times when the balance of power had favoured employers. At those unusual times, any kind of disruption, whether caused by new technology or not, has had the potential to enable employers to break working conditions and cut wages. Right now, for example, there is no necessary reason for the ability to do business over the Internet to harm workers. In many ways it empowers workers by reducing the information advantages of big employers. But in an environment where unions are weak and working conditions are vulnerable to erosion, the outcome is firms like Airtasker, where workers bid against each other to perform outsourced tasks, often for less than the minimum wage[4]. There is nothing new about this kind of working arrangement. It could be seen outside the wharves on Sydney’s “Hungry Mile[5]” in the 1930s, where workers went from wharf to wharf each day hoping for work, or today on street corners in the United States, where (often undocumented) construction workers gather in the mornings hoping to be picked for work. But if technology isn’t to blame, what is? The real story begins in the early 1970s, when there was an upsurge in inflation associated with the breakdown of the post-war Bretton Woods[6] system of fixed exchange rates , and soaring prices in commodity markets including that for oil. The result was a “wage-price spiral” as both wages and prices rose at unexpected annual rates of more than 10%. In a nation with a history of strong trade unions, decades of full employment, and the boundless faith in the future forged by the 1960s, wages grew faster than prices as both spiralled upwards. By the time rising unemployment began to bite, and inflation slowed down, the wage share of national income had risen to an unprecedented 62%. Reining in this “real wage overhang[7]” became the central preoccupation of macroeconomic policy throughout the 1970s and 1980s. This made sense at the time. But, as in other fields, ideas formed in the 1970s and 1980s continued to dominate the thinking of policymakers long after they had either been proven to be failures or rendered obsolete by changing circumstances, as was the case with policies designed to hold back wages. The policies had several elements. There were a series of changes in industrial relations law, most of which have attacked unions and weakened the bargaining power of labour. The Fraser government introduced Sections 45D and 45E of the Trade Practices Act banning secondary boycotts[8], that is, action in solidarity with other workers. Fraser also created the Industrial Relations Bureau, the first of a series of industrial “police forces”. On its election in 1996, the Howard government introduced the Workplace Relations Act 1996[9] which extended scope for non-union agreements. After winning a Senate majority in 2004, Howard introduced WorkChoices[10] which limited the scope of collective bargaining, and wound back protections against dismissal. Read more: Explainer: what are the ABCC and Registered Organisations bills?[11] The Industrial Relations Bureau maintained at least a pretence of impartiality. By contrast, the organisations created by the Abbott and Turnbull governments (the Registered Organisations Commission and Australian Building and Construction Commission) have been so nakedly anti-union that they have repeatedly broken the law[12] they are supposed to uphold[13]. Labor governments have wound back some of the most extreme measures, but have not changed the general direction of policy. Even measures that appeared superficially favourable to workers turned out differently. For example, in 1993 the Keating government introduced the concept of “protected industrial action”. It was some time before it became apparent that the result was to abolish any general right to strike[14], something that exists in almost every other democratic government. As Minister for Workplace Relations, Bill Shorten introduced measures that were pitched as protecting penalty rates through a review process undertaken by the Fair Work Commission. A few years later, in a highly politicised process, the Commission used the process to cut penalty rates[15]. Coalition governments have also used the power of the state directly against unions. Notable examples include the string of royal commissions[16] created by the Abbott government and the use, in 1998, of ex-military strikebreakers to break the Maritime Union of Australia. Their training and deployment was facilitated by a government consultant who worked with the major waterfront employer, Patricks[17]. orchestrating the offshore training of the replacement workforce through the actions of consultant Stephen Webster and other shadowy ex-military figures. Finally, macroeconomic management has operated on the basis that any increase in wages is a danger signal requiring a tightening of fiscal and monetary policy. A notable example, was the warning by then Employment Minister Eric Abetz in January 2014 months after taking office that Australia faced a “wages explosion[18]”.

ABS Wage Price Index[19] Far from “exploding”, wage growth slid and hasn’t recovered. More striking than his failed prediction, was Abetz’ assumption, taken for granted in policy debate, that any substantial increase in wages would be disastrous. It is only in the last few years that this assumption, inherited from last century, have been challenged. The Reserve Bank in particular has become an advocate for higher wage growth. Yet as Cormann’s incautious outbreak of truthtelling has shown, the view has yet to percolate through to Australia’s elites. The Academy of the Social Sciences in Australia[20] is one of Australia’s four learned academies. The ASSA coordinates the promotion of research, teaching and advice in the social sciences, promotes scholarly cooperation across disciplines, comments on national needs and priorities in the social sciences, and provides advice to government on issues of national importance.