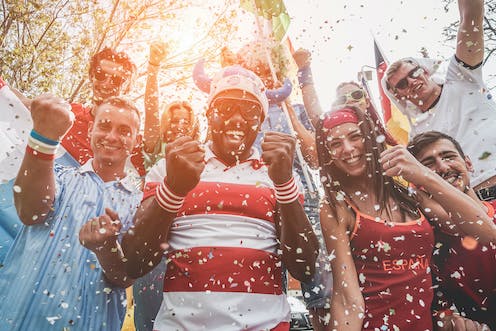 World Cup football teams with a higher proportion of players smiling in their official portraits have scored more goals on average[1] in all group phases since 1970. The authors of this study argue that smiling is a reflection of confidence. Greater confidence results in a greater capacity to overcome complex situations and score more goals.

We decided to explore whether this same smiling-creativity link holds for entire societies by looking at the relationship between happiness and creative capacity.

Read more: Why are Russians so stingy with their smiles?[2]

The argument draws on what the researchers found with football teams. If we extrapolate individual smiling and happiness to a communal context, societies that are happier than others would reflect more confidence and trust in their institutions and economic systems.

This in turn can support more and better innovation in business and related processes – the better the conditions (for instance, low levels of corruption), the more new ventures are likely to arise.

In addition, unhappy people, reflected as those who are preoccupied with worries, simply do not have the carefreeness to be creative while making decisions[3].

Another consideration is that people who are happier tend to be more socially active and vice versa. And it is well known that social interactions are conducive to debate and the creation and diffusion of new ideas[4].

Many[5] have proposed happiness as an alternative measure of economic progress and wellbeing across countries and regions of the world.

The justification is that happiness should be considered the main objective of economic growth. Thus, the focus has generally been on understanding happiness as a consequence of development, used as a proxy of how well societies are doing.

We instead wanted to see whether happiness is a driver of economic development rather than a result of it.

Different[7] researchers[8] have[9] found[10] that creative capacity and innovation are important predictors of economic growth and development.

If we can show that the connection between happiness and creative capacity holds in societies, as it apparently does in World Cup football teams, then we can argue that happiness indeed supports economic development (and vice versa).

To explore this phenomenon across countries, we used happiness data from the UN World Happiness Report[11], which ranks country happiness based on the pooled results from Gallup World Poll surveys (from 2015-2017), and contrasted it with innovation data from the World Bank’s Global Innovation Index[12].

This index is based on 81 different indicators related to innovation, such as credit, ecological sustainability, education and the political environment.

As shown in the following graph, happiness and the Global Innovation Index show a strong positive correlation. This implies that happier countries do outperform others in terms of creativity.

We kept exploring and looked at data from counties (districts) in the United States. Specifically, we contrasted mental health[13] (defined as fewer poor mental health days) and a creativity index[14].

We used a measure of poor mental health days, as there are no data on happiness within the United States. The creativity index[15] consists of the local share of employment in occupations that require a high level of “thinking creativity”.

Again a positive correlation is evident in the following chart.

The relationship between fewer poor mental health days and creativity thus is confirmed to exist across US counties.

But some regional variation does exist. For example, in the northeast (where counties on average are wealthier than in the rest of the country), the relationship is more pronounced.

This does not mean that to progress as societies general happiness alone suffices. Rather, happiness seems to be one of a number of important factors that promote more and better growth.

This research is still in progress, and more work is needed to establish a clear causal relationship between happiness, education and other factors of economic growth.

But, if the underlying hypotheses are not rejected, the policy implications are clear. More and better programs intended to reduce stress (weekends of three days?), for instance, could bring important economic benefits to societies.