Female representation of 30% on a company board is the tipping point[1] at which it stops being tokenistic and begins to make a difference on things like innovation.

Norway, France and Sweden have already achieved this target[2] for companies overall. In Australia, the ambition was to do so in 2018. At this stage, that looks unlikely[3]. This suggests it is time to consider more surgical policies to increase female board membership.

Read more: Company boards are stacked with friends of friends so how can we expect change?[4]

Our ongoing research aims to understand the main drivers of women’s participation on boards. We imagined that the drivers might be complex and multidimensional. In fact, we found that they were pretty simple.

So far we have found the only significant predictor that boards will reach the 30% target is that they have a director who sits on another board that has already done so.

We have looked at the company boards of the 200 largest companies on the Australian Stock Exchange (the ASX200) and how they are interconnected through their board members. These connections help with the sharing of expertise and experience across firms.

The directors of the ASX200 form a classic network. Of the largest 200 companies in Australia, 172 companies form one giant “component”, linked together through shared directors. 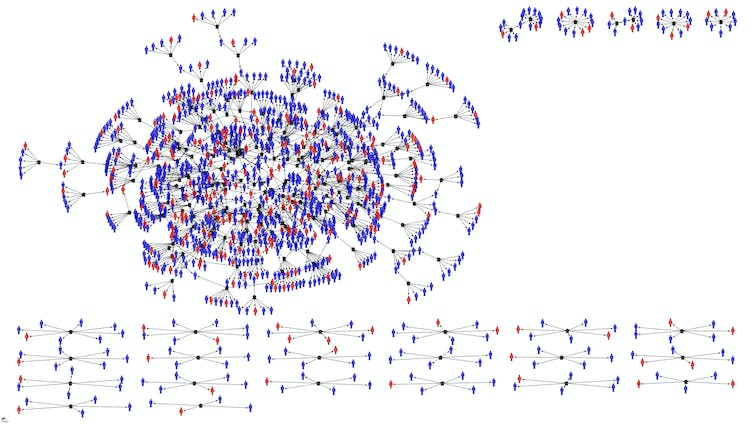 Which factors are significant?

We tested any variables that might make a difference in the recruitment of women to boards. These included the industry sector, market capitalisation, affiliation of a board member with the Australian Institute of Company Directors[5] (AICD), and the presence of a “male champion of change[6]” on the board.

We thought some industries (say health) might be more likely to cross the 30% threshold than others (say mining). Smaller companies might be less likely to appoint women to their boards, because this is indeed the case for boards outside the ASX200[7].

Boards with an AICD graduate or fellow might also be more likely to cross the threshold, given the institute’s robust advocacy of women on boards[8].

The same logic applies to the presence of a male champion of change on a board[9].

The other four variables make it less likely that a board will hit the 30% target. Specifically, firms in four sectors – consumer discretionary (retail), health, industrials and materials – are significantly less likely than the rest to reach the 30% threshold.

We then tested for different kinds of “network effects[11]”. Network effects can take many forms. For example, the reciprocity effect occurs where you “like” me and I “like” you.

The popularity effect is where we both “follow” the same celebrity on social media but not each other.

In the case of the ASX boards, we found that just one network effect is statistically significant – network contagion.

Contagion literally describes the biological transmission of a disease from one person to another. In the board context, it refers to a process of social influence, where shared directors transmit ideas and practices from one board to another.

Once we include the director network contagion effect, all other variables discussed earlier became irrelevant – sector, market capitalisation, AICD affiliation and male champions of change make no difference to the appointment of women on boards.

Only director network contagion is important.

Read more: Daniel Andrews, board quotas and the myth of 'insufficient women'[12]

Time for a more focused strategy

Our findings suggest that current strategies to advance women on boards lack focus. We need a more surgical approach to the issue, directed towards the frontier where boards with three women or more interact with boards under the 30% threshold.

Think of it as the inversion of a public health campaign to prevent the spread of a disease. The first step in such a campaign is identify the diseased and anyone who has had contact with them, then to isolate them.

The first step in our proposed campaign is to identify the boards that meet the 30% threshold and any boards with which they share directors, then intensify their exposure.

Having said this, our findings are based upon a sliver of data: the biggest companies in the country at a single point in time.