Many entrenched motivations for misconduct in the banking sector have been uncovered by the ongoing royal commission[1]. Not least are the conflicts of interest inherent in the major Australian banks providing financial, insurance and mortgage advice and selling related products.

The banks, most recently the Commonwealth Bank[2] (following the lead of ANZ and NAB[3]), are already separating their wealth-management arms – services such as mortgage broking, insurance and financial planning and advice – in a bid to resolve these conflicts of interest.

Read more: There's no evidence behind the strategies banks are using to police behaviour and pay[4]

These restructures are a step in the right direction. But they are not enough to overcome the fundamental problem: the banks’ sales-driven culture. This goes much deeper and seemingly pervades all of their operations, as the royal commission has highlighted.

The nature of this problem lends weight to an Australian Securities and Investments Commission (ASIC) proposal to embed regulatory staff in the major banks to help change the culture.

The evidence made public by the forensic analysis of Rowena Orr QC[5], counsel assisting the commission, has revealed many instances of the banks’ “toxic” culture. It’s one that puts profits and growth – in particular their associated incentive systems – above customers’ interests.

This has been evident from the outset. The first round of hearings[6] in March 2018 revealed[7] allegations of significant cash bribes[8], forged signatures[9] and manipulation of incentives within NAB’s “Introducer Program”. This generated billions of dollars in home loans for the bank, with introducers paid 0.4-0.6% of home loan totals.

We have had belated “apologies” to customers who were treated unfairly or, worse, fell victim to unscrupulous or wrongful behaviour; admissions that the banks breached their own codes of conduct; and assurances that changes in governance systems aimed at improving culture have been made or will be. Yet the banks are still in denial that systemic cultural issues have been at play or persist in their organisations.

A stark example is provided in the evidence of Rabobank executive Bradley James at the most recent hearings[10] that dealt with issues of farming finance. Orr questioned James about a A$3 million loan made on the advice of a manager of this rural lender to a Queensland grazing family, the Brauers. They had no ability to repay it. The motivation for the manager was to meet his lending KPIs to earn a bonus.

Asked whether he saw any difficulty with that from a customer perspective, James’s response was: “Absolutely not!” This shows a complete failure to understand the bank’s incentive structure – linking staff bonuses to the number of loans brought in – and the culture that goes with it as a potential source of misconduct.

James defended the bank’s system, saying it enabled the business to grow. This demonstrates that, in putting profits and growth ahead of customers’ needs, banking culture is out of touch with community expectations and societal values.

Read more: Evidence from the banking royal commission looks like history repeating itself[11]

Regulators must step in

Little wonder, then, that trust in the financial sector is at an all-time low. ASIC chair James Shipton speaks of a “trust deficit”. 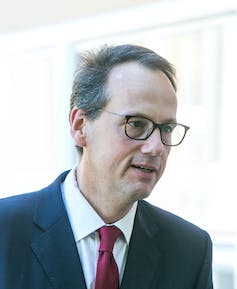 ASIC chair James Shipton’s plan to embed the regulator’s staff in banks could be a catalyst for real change. Glenn Campbell/AAP

Shipton is seeking government funding to embed specialist ASIC supervisors in the major banks to help drive cultural change and rebuild trust. This should be done, signalling as it does a new, more intrusive regulatory style.

However, ASIC should do more. It needs to take enforcement action. Most notably this would include prosecution in cases of criminal wrongdoing by the banks and their top executives. The latter have been conspicuously absent at the royal commission, raising important questions about bank accountability.

Another corporate regulator, the Australian Competition and Consumer Commission (ACCC), last month brought criminal proceedings[12] against ANZ and several other companies and individuals over an alleged cartel arrangement. Commentator Nathan Lynch observed[13] that, irrespective of the outcome, one message reverberates: senior management accountability:

Governments and regulators have had enough of financial services firms that are still talking about improving culture and conduct. A decade on from the financial crisis … they now want to see a healthy dose of fear and respect in the market.

Regulators are now at the point where they’re saying, ‘It’s impossible for things of this magnitude to happen without the people right at the top knowing what was going on.’

If ASIC also took such action, it would go a long way to overcoming concerns about an accountability deficit for the scandals and wrongdoing. This could be a catalyst for real cultural change in the industry to reduce misconduct in the future.

Read more: Company boards are stacked with friends of friends so how can we expect change?[15]

As for the current bank restructures, certain aspects are problematic.

In addition, the banks remain keen to distribute products to retail customers. For example, ANZ’s sale to IOOF includes a 20-year deal to make IOOF super and investment products available to its retail customers.

These moves raise concerns that, despite these demergers, conflicts of interest and the banks’ failure to act in customers’ interests will continue.

At a minimum, Shipton’s plan to put ASIC agents in banks is more important than ever when the indications are that the banks cannot be left to self-regulate.

Authors: Vicky Comino, Lecturer in Corporations Law and Regulation of Corporate Misconduct, The University of Queensland