When the case for big transport projects is made without due analysis, we risk building the wrong projects. The result is we waste billions of dollars and rob ourselves of the infrastructure our booming cities need to be more liveable. Given how fast our big cities are growing[1], we simply can’t afford to make decisions based on limited or misleading information. Yet this keeps happening.

The proposed airport rail links show how governments continue to make huge taxpayer commitments to projects before they are able to articulate the costs, benefits and risks.

In the case of proposed road congestion charges we see an important reform languishing. This is because when reforms rest on obscure or unclear analysis they inevitably fail to generate public support.

Read more: Western Sydney Aerotropolis won’t build itself – a lot is riding on what governments do[5] Airport rail link can open up new possibilities for the rest of Melbourne[6]

In the case of the recently announced multi-billion-dollar investments in airport rail in Western Sydney[7] and Melbourne[8], neither project has a business case. Yet politicians on both sides tripped over themselves in committing to building them.

There are good reasons to be wary of their eagerness. A government study released this year[9] stated that Western Sydney airport rail[10] wouldn’t be needed to cater for customers and workers at the airport until 2036 at the earliest. Without a business case, we have no way to understand the grounds on which the government still believes this project represents value for money.

In the case of Melbourne airport rail, the project’s route hasn’t been resolved[12], let alone its costs, ticket pricing structure, or potential benefits. Infrastructure Australia’s most recent priority list[13] did not include a proponent for the project.

And Infrastructure Victoria says[14] upgrading airport bus services should be investigated first. This is because, at A$50-100 million, bus services would be a much cheaper way to tackle the same problem. It has also said the rail line should be delivered – but not for at least 15 years.

Read more: Melbourne Airport is going to be as busy as Heathrow, so why the argument about one train line?[15]

The second example of Australia’s transport planning information deficit is different but still damaging. It concerns the way infrastructure experts encourage governments to make worthwhile but politically challenging reforms to how we use existing infrastructure. The idea is to get more value from the assets we already have[16].

Infrastructure Australia advocates a road congestion tax[17]. This would replace annual registration fees and petrol taxes with a scheme that charges motorists more when they travel in congested places at congested times.

It’s a very good idea. Indeed, a Grattan Institute report[18] last year recommended governments think seriously about road congestion charges for Sydney and Melbourne. But the way Infrastructure Australia has mounted the case leaves a lot to be desired.

Read more: Delay in changing direction on how we tax drivers will cost us all[19]

Last month, Infrastructure Australia released estimates of the benefits[20], prepared with PwC, of a scheme to charge motorists more precisely according to the location, time and distances they travel. According to these estimates, in just over a decade, Australia’s GDP would be A$21 billion larger every year – and this would increase to A$36.5 billion a year by 2047.

The problem is that Infrastructure Australia provides little information about how these enormous numbers were calculated. In a flawless example of circular reasoning, IA refers to analysis done by PwC. PwC in turn notes that the estimates were “collaboratively developed by IA and PwC”.

The calculations do not appear to have included the costs of implementing and running such a scheme. And we have been told nothing about how this grand plan might work in practice. 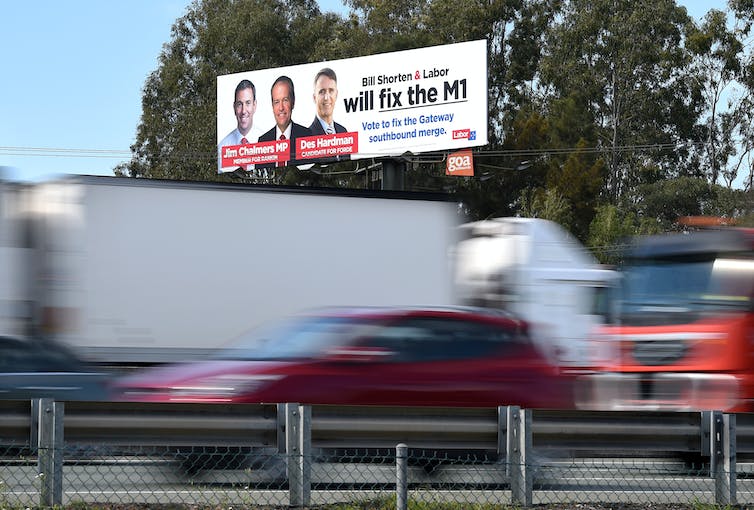 Politicians are quick to promise fixes for congestion, but both sides of politics often commit funding before the economic case has been properly made. Dave Hunt/AAP

Converting reductions in travel times to increases in GDP

The most commonly cited estimates of the “avoidable costs” of congestion in Australia come from the Bureau of Infrastructure, Transport and Regional Economics. In 2015, BITRE estimated[21] the annual costs for Australia’s eight capitals totalled about A$16.5 billion. This was forecast to rise to about A$30 billion by 2030.

Such estimates have been important in highlighting the fact that congestion is not just aggravating but costly. But such estimates are, as BITRE itself states[22], “very blunt instruments for estimating and projecting congestion occurrence”.

It is difficult to precisely convert estimates of avoidable congestion costs into changes in GDP, of course. But the new Infrastructure Australia estimates do not even follow some simple, but important, rules of modelling.

First, they don’t make it easy for readers to see the basis for the assumptions used. Second, they don’t appear to have factored in costs as well as benefits. And third, in a situation where significant uncertainty surrounds the estimates, they haven’t published a range for the estimated impacts.

Getting transport projects right is critically important in cities that are already under pressure. Yet too many big infrastructure calls in Australia are based on misleading information or wafer-thin evidence. We need to do better.