The Australian government has abandoned its ambitious targets to have the adult population vaccinated by the end of October. It has, in fact, abandoned having any target.

We all sometimes find ourselves in tough positions and just want to call it a day. But this decision is not what we should expect from the nation’s leaders when so much is at stake. It also goes against decades of research and evidence on the importance of goal-setting.

In January Prime Minister Scott Morrison said the plan was to have four million Australians vaccinated by the end of March[1], and the entire adult population by the end of October[2]. At the start of April, however, the actual number was less than 842,000[3]. (As of April 15 the number was just over 1.4 million doses[4].)

Then, on April 11, in a video posted to his Facebook page at 11:35pm[5], Morrison announced there would be no more targets. “We are just getting on with it,” he said.

But without any target, what is the “it” we should be “getting on with”? 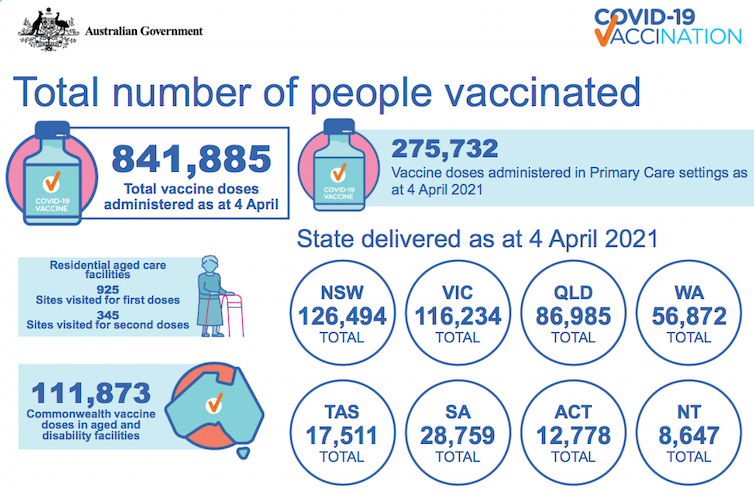 Australia’s vaccination score card as of April 4 2021. Don’t expect to see any more of these. Australian Government/Department of Health, CC BY-SA[6][7]

Imagine if at your next work meeting the boss echoed the prime minister’s words that “one of the things about COVID is it writes its own rules” and said something like:

This quarter, rather than set targets that can get knocked about by every to and fro, we are just getting on with it.

Will these words inspire your team to succeed?

According to leadership research, good management necessarily entails influencing others to achieve goals or objectives. This is a point made even in introductory undergraduate management textbooks[8].

To abandon goals or targets is, by definition, to abandon the mantle of leadership.

Study[10] after study[11] has demonstrated why setting ambitious targets is important for virtually any activity — from turning a couch potato into a marathon runner, to putting an astronaut on the Moon, to building a driverless car.

Of course, just setting an ambitious goal is not enough. Done poorly, they can be discouraging and undermine performance[12], and even lead people to behave unethically[13]. To work[14], people and organisations need to have the capabilities and resources to address unexpected twists and turns, as well as strategy to manage risks[15] and overcome any barriers that crop up.

But so long as goals are set with these things in mind, they help achieve results[16], driving creativity[17], innovation[18] and performance[19].

We already see evidence of this in COVID vaccinations overseas.

The US government’s Operation Warp Speed[20], the private-public partnership to develop and distribute multiple vaccines in record time, started with this goal[21]:

to deliver tens of millions of doses of a SARS-CoV-2 vaccine — with demonstrated safety and efficacy, and approved or authorised by the US Food and Drug administration for use in the US population by the end of 2020, and to have as many as 300 million doses deployed by mid-2021.

The goal was both ambitious and specific, defining the “it” that everyone should “get on with”. It formed the basis for planning that has started paying dividends after a year of death and economic destruction.

The federal government’s decision to abandon goals goes against research the Commonwealth itself commissioned just a few years ago.

In 2015, the federal Department of Employment and Workplace Relations funded the University of Melbourne’s Centre for Workplace Leadership[22] to survey more than 3,500 Australian workplaces about how the quality of management and leadership affects productivity and innovation.

The Study of Australian Leadership[23], which surveyed both private and public sector organisations, found very basic management practices to be among the most important drivers of organisational performance and innovation. These basic practices include setting clear and ambitious targets, communicating them, and regularly monitoring progress. 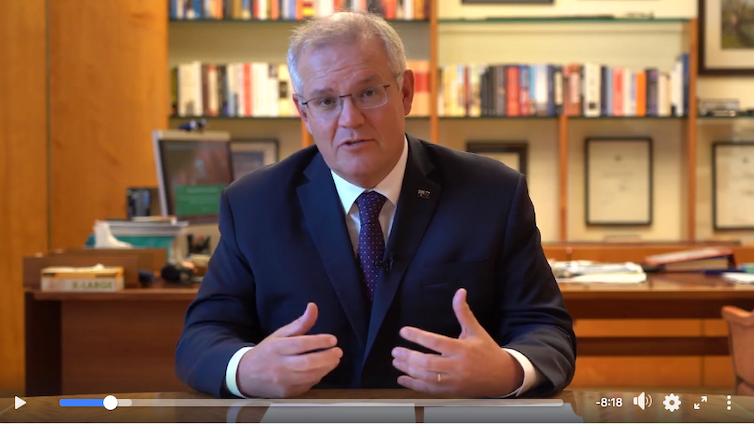 Scott Morrison communicates via a Facebook video on April 11 that the Australian government has abandoned vaccination uptake targets. Facebook[24]

Given the evidence, any government with claims to having competent leadership should be setting and communicating a clear and ambitious goal for its vaccination roll-out.

Successful roll-outs in other countries show this should be done in consultation with local and regional governments, health professionals and key players in the public and private sectors (who must also be involved in the design and implementation of strategies and processes).

Given the federal government’s own limited capacities at the local level (public hospitals, for example, are run by the state and territory governments), its engagement with other stakeholders must be meaningful — not just lip service. It must also resist the urge to control everything.

Let there be goals

When faced with complex problems, getting agreement on ambitious goals can be extremely powerful. Nor does it need to take forever, as is often claimed. Australia’s response to the pandemic in 2020 largely shows this.

There will be challenges with meeting targets. Vaccine supplies are limited. There will be hiccups. But abandoning any sense of ambition is not the answer.

Because COVID “writes its own rules”, as Morrison has rightly pointed out, the federal government should pursue multiple alternative paths to achieving its goals. In other words, it should not put all it eggs in one basket, as it did with its plan to rely on local GPs to deliver vaccines, rather than use “vaccination hubs” as other nations have done.

Abandoning vaccination targets now undermines all that has been sacrificed to be in the relatively good position the nation is now in. The economic and social costs, as well as the potential further loss of life, will mount unless the Morrison government reconsiders its misguided decision.

It must put aside concerns about the political fallout of missing targets. We cannot “get on with it” without leadership that defines the “it” to be gotten on with.

Authors: Peter Gahan, Professor of Management, Faculty of Business and Economics, The University of Melbourne