The two stores[1] – one in Sydney’s inner-west suburb of Marrickville, the other in the outer south-west, near Bankstown Airport – were small, about a quarter the size[2] of a mainstream supermarket. Each stocked just 900 products, 90% of which were unknown brands.

Shoppers had to bring and pack their own bags themselves. To use a trolley required a “gold coin”. They didn’t seek to entice customers with “loyalty[3]” rewards or other gimmicks.

Few Australian supermarket executives at the time would have considered them models for success. They couldn’t imagine the impact Aldi would have on Australia’s retail sector and shopping habits.

Her two sons, Karl and Theo[6], took over the business after World War II. In the impoverished conditions that followed Germany’s defeat, they focused on keeping costs, and prices, low. Among their strategies were to stock only the most popular items and avoid perishable items. 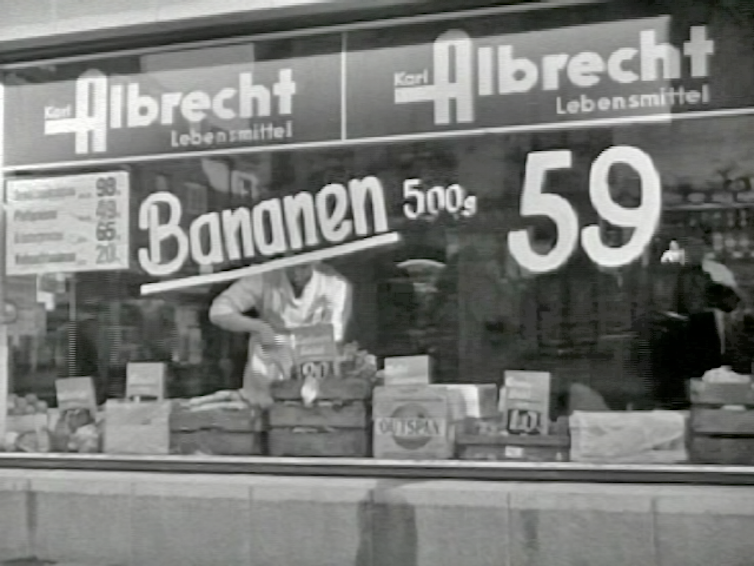 The brothers adopted the the name Aldi – combining the first two syllables of Albrecht Diskont (“discount” in German) – in 1961[11] (though accounts differ on the year).

At about the same time (again, accounts differ on the year) they had a major disagreement over whether to sell cigarettes. They resolved the dispute by splitting the business into two geographic entities: Aldi Nord (“North”), run by Theo (and selling cigarettes), and Aldi Süd (“South”), run by Karl. The split was amicable, and they managed the two divisions collaboratively.

From the late 1960s Aldi began to expand across Europe, beginning with the acquisition of Austrian grocery chain Hofer. It opened its its first US store, in Iowa City[12], in 1976, and its first British store, in Birmingham)[13], in 1990.

So by the time Aldi opened its first stores in Australia, it was a booming multinational. It now has more than 10,000 stores in 20 countries, including China.

In coming to Australia, Aldi pounced on a gap in the grocery retail market.

The “food discounter” model had been dominated by now defunct Franklins[16] and Bi-Lo[17] (owned by Coles). By the late 1990s, however, these chains had messed with their “no-frills” model through attempts to go upmarket[18]. It proved disastrous. Franklins went into terminal decline. Coles abandoned the Bi-Lo brand[19] in 2006.

It overtook the IGA group to become the third-biggest player in Australia’s supermarket sector by the end of 2013 – taking 10.3% of all grocery dollars[22] (with Coles having 33.5% and Woolworths 39%). Its first stores in South Australia[23] and Western Australia[24] came in 2016. 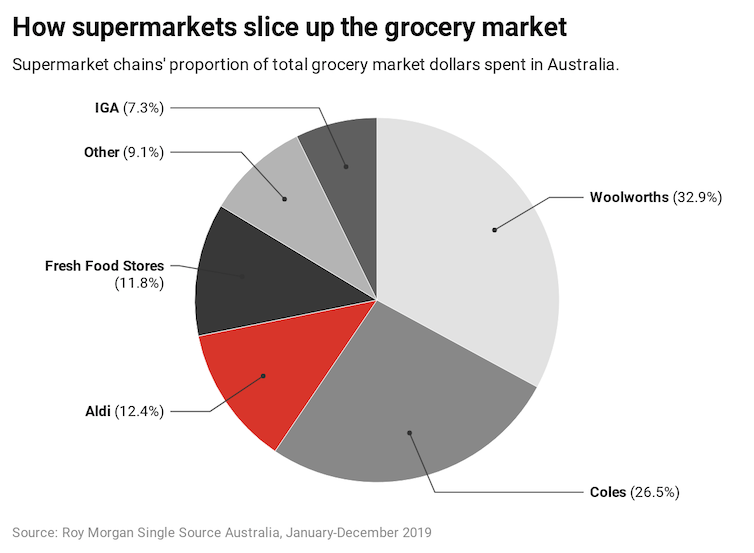 CC BY-ND[27] In 2020 Aldi was named Australia’s best supermarket[28] by consumer review website Canstar Blue (the seventh time in a decade), and second-most trusted brand[29] (after Bunnings) by Roy Morgan. Its practices have influenced how the other supermarkets do business. In particular it has forced competitors to increase their own “private label” (or home-brand) products, introduce “phantom brands[30]”, and promote ever-changing “special buy[31]” general merchandise ranges. Private and phantom labels In 2004 private labels comprised an estimated 9%[32] of the products Coles and Woolworths stocked. By 2019 they made up 30% of Coles’ sales[33]. Woolworths has similarly increased its private-label range, due explicitly to pressure from Aldi’s arrival and expansion[34]. Read more: Love them or loathe them, private label products are taking over supermarket shelves[35] Notably, Aldi sells no “ALDI” branded products. Instead it trades in phantom brands[36], such as “Belmont” ice cream, “Radiance” cleaning product and “Lacura” skin care. These brands are intended overcome perceptions of private label items being lower quality. In 2016[37], Woolworths launched its own range of phantom brands. Coles followed suit in 2020[38] with brands including “Wild Tides” tuna and “KOI” toiletries. 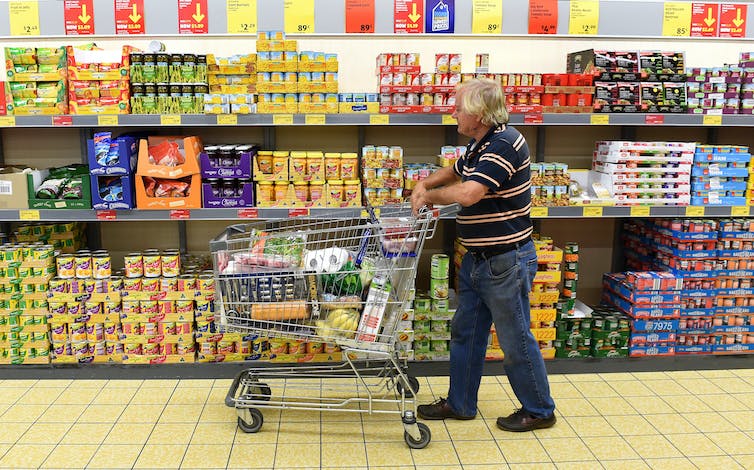 Cheap over choice is key to the Aldi business model. Dave Hunt/AAP Read more: Phantom brands haunting our supermarket shelves as home brand in disguise[39] Special buys The bigger supermarkets have also been forced to emulate Aldi’s drawcard of bi-weekly “special buys” – heavily discounted items not normally sold in supermarkets. These have included[40] televisions, lawn mowers, vacuum cleaners, motorcycle jackets, luggage and (curiously for a country like Australia) ski gear. There are always limited quantities[41] and shoppers regularly experience disappointment. Despite this – indeed because of this – shoppers will queue and keep coming back. These quirky, seasonal, limited-stock items create excitement and FOMO – fear of missing out[42]. 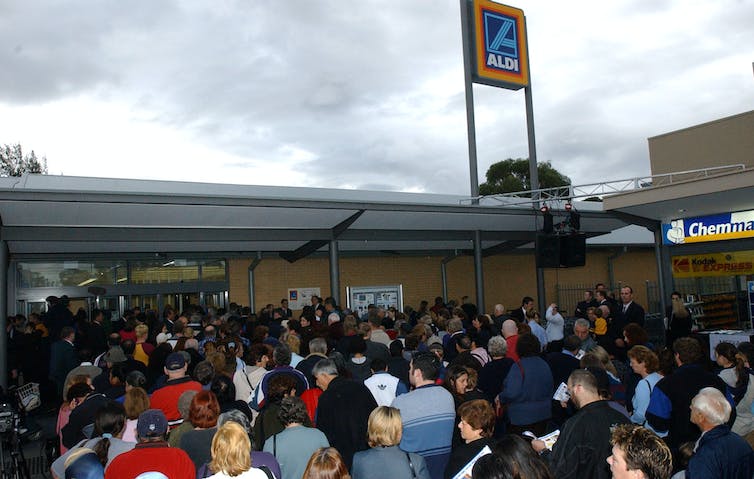 Shoppers queue for bargains at Aldi’s store in Heidleberg West, Melbourne. Julian Smith/AAP In June 2020, Coles launched its own fortnightly “special buys[43]”. Unapologetically Aldi While its competitors have emulated Aldi in several ways, the German chain remains a very different no-frills operation. It hasn’t bothered with investing in the self-service checkouts[44] that are now ubiquitous in other stores. It continues to offer only long conveyer belts and seated register operators[45]. Read more: The economics of self-service checkouts[46] Nor does Aldi have plans to facilitate online deliveries, in which the two supermarket giants have invested heavily[47]. It never had to cope with customer backlash[48] over phasing out free single-use plastic bags either. Because it never offered free shopping bags, always charging 15 cents for them. So Aldi continues to be an exception to the rule in Australian supermarket retailing. It history suggests that’s a recipe for continued success.