The results of the first large-scale survey of the experience of Aboriginal and Torres Strait Islander people at work give plenty of food for thought.

They show that racism and prejudice remain important issues, but there is much more at play – concerned with the “cultural weight” many people feel from being an Indigenous person in a largely non-Indigenous organisation.

The report, called Gari Yala[1] – meaning “speak the truth” in Wiradjuri, the language once spoken over most of what now is inland New South Wales – is based on surveying 1,033 Aboriginal and/or Torres Strait Islander people.

The survey was carried out by the Jumbunna Institute for Indigenous Research and Education at the University of Technology Sydney and Diversity Council Australia, a not-for-profit organisation that promotes diversity and inclusion in the workplace. It has more than 600 corporate members. (Two of those, National Australia Bank and Coles, funded this project.)

Responses were collected from the council’s member organisations, research panels, community groups and through social media. The results are reflective of, rather than representative of, the views of all Aboriginal and/or Torres Strait Islander people.

About four in every five respondents (78%) said they felt sharing their Aboriginal and/or Torres Strait Islander background at work was important. 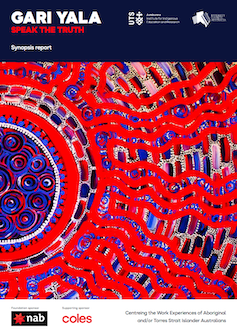 Almost two-thirds said they experienced what we have termed high “identity strain” (this is explained below).

Well over a third (39%) said they felt what we call a “high cultural load” (this term is also explained below).

A similar proportion (38%) said they felt they had been treated unfairly because of their Indigenous background, with 59% having heard comments about how they looked or “should look” as an Aboriginal or Torres Strait Islander person, and 44% subject to racial slurs.

Read more: It's time we moved the goalposts on Indigenous policies, so they reflect Indigenous values[3]

What is identity strain?

The research team coined the term identity strain. It refers to “the strain employees feel when they themselves, or others, view their identity as not meeting the norms or expectations of the dominant culture in the workplace”.

One participant put it this way:

Each time I share different parts of me to the same people or reshare to new people, it always changes the relationship and I am then required to adjust how and why we interact to help them feel comfortable. Keeping mental notes and constantly assessing how safe the space is depending on who is the room.“

What is cultural load?

Cultural load is the extra burden carried by Aboriginal and/or Torres Strait Islander people in workplaces where there are few or no other Indigenous people.

Almost 40% felt they carried a high cultural load in their workplace, which plays out through:

Read more: Why we aren't closing the gap: a failure to account for 'cultural counterfactuals'[4]

What can employers do?

Organisations may say they want to create a workplace that treats Indigenous people and employees equitably.

But only a quarter of our survey participants said they worked in organisations they felt were authentically committed to change – acting, rather than simply saying they were committed to act.

Participants working in organisations they felt were authentic were more satisfied than others, and were less likely to leave.

The full and summary reports are available from Diversity Council Australia’s website[5].