Christmas is a time of celebration, relaxation and gift giving.

But choosing gifts can also make it a time of stress and anxiety[1]. The wrong gift can actually do more harm than good[2].

Here is some advice, based on decades of research, on how to side-step such pitfalls.

Why do we give gifts?

Research into the psychology of gift-giving[3] suggests there are two goals to consider when giving someone a gift.

The first is to make the recipient happy[4]. That mostly depends on whether the gift is something they want.

The second is to strengthen the relationship between giver and recipient[5]. This is achieved by giving a thoughtful and memorable gift – one that shows the giver really knows the recipient. Usually this means figuring out what someone wants without directly asking.

You can see the conundrum.

To get someone the gift they most desire, the obvious thing to do is ask. This approach can achieve high marks on desirability. But it is set up to fail on communicating thoughtfulness.

The following graphic illustrates the problem (with myself as the example recipient). 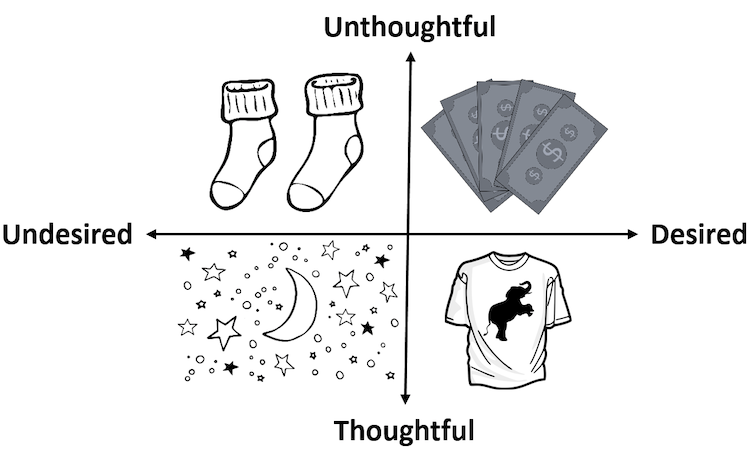 Two dimensions to consider when buying someone a gift: thoughtfulness and desirability. Images from https://pixabay.com/

The best kind of gift is one both desired by the recipient and is thoughtful. For me this might be a custom t-shirt printed with an in-joke.

The worst kind of gift, on the other hand, is neither desired nor thoughtful. For me, this might be a pair of socks.

Then there are desirable but unthoughtful gifts, such as cash, and undesired but very thoughtful gifts, which for me would be officially naming a star in my honour. I love astronomy but this just isn’t for me.

Read more: We're not as Grinchy as we think: how gift-giving is inspired by beliefs-based altruism[6]

This is why buying a gift can be so anxiety-inducing. There is a “social risk[7]” involved.

A well-received gift can improve the quality of relationship between giver and recipient[8] by increasing feelings of connection, bonding, and commitment. A poorly received gift can do the opposite[9].

This has been shown by research. A 1999 study[10] asked 129 people to describe in detail a situation in which they had received a gift. Ten people reported gifts that weakened the relationship. Two people actually ended the relationship after the gift. 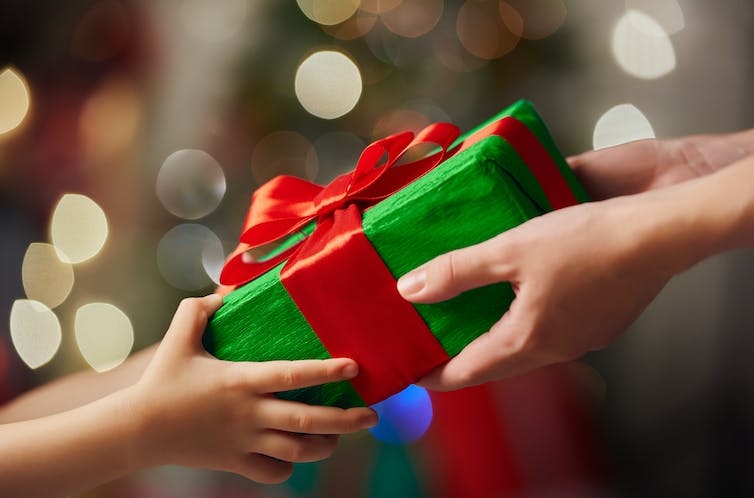 The thought doesn’t count as much as you think. Gift givers tend to overestimate how well unsolicited gifts will be recieved.

How much does the thought count?

Research also shows people tend to overestimate their ability to discern what a recipient will like, and therefore what gifts will lead to a strengthening of the relationship.

A 2011 study[11] asked respondents to think back to either their own wedding or a wedding to which they were a guest. Gift recipients were asked to rate how appreciative they were of gifts either listed on the gift registry or not. Guests were asked to estimate how well they thought gifts were received.

Gift recipients strongly preferred gifts on their list. However, gift givers tended to wrongly assume unsolicited gifts (those not on the registry) would be considered more thoughtful and considerate by their intended recipients than was the case.

Gift givers also tend to overestimate that more expensive gifts will be received as being more thoughtful. But it turns out gift recipients appreciate expensive and inexpensive gifts similarly[12]. In reality, they actually feel closer to those who give convenient gifts[13], such as a gift certificate to a nearby ordinary restaurant rather than a distant upscale restaurant.

The psychology of cash

What about simply giving cash?

After all, the recipient can buy exactly what they most desire. But cash is considered unthoughtful[14] because it requires no effort and seems to put a dollar value on the relationship.

In Chinese cultures, cash is given in a red envelope to decommodify the money by literally enveloping it in a symbol of good luck. If you’re going to give cash, think about doing it creatively[15], such as through clever origami or in some other way that personalises it. This will show a degree more thoughtfulness.

The closest alternative to cash is the gift card. The main benefit is that it requires some effort[16] and allows some thoughtfulness in the selection of which gift card to purchase. Nevertheless, the research suggests the gift card is often reached for as a last resort[17].

Read more: No presents, please: how gift cards initiate children into the world of 'credit'[18]

The best gift of all

If you want to have a wrapped gift under the Christmas tree and haven’t been tipped off on exactly what the recipient wants, go for something practical with a personalised touch. If you really are struggling, then a thoughtful card together with a flexible gift card is a safe option.

But the main takeaway from the psychology of gift-giving research is that, if your goal is to strengthen your relationship with the recipient, give them an experience.

The most precious gift you can give a loved one, though, is actually quite simple: quality time. In a 2002 study[20] involving 117 people, more happiness was reported from family and religious experiences than from events where spending money and receiving gifts was the focus.

So this Christmas, grab a drink, sit down and have a conversation. Get to know each other. If done well, come next Christmas, you’ll both know exactly what gift to get each other.