It’d be wrong to interpret last week’s Reserve Bank decision to cut its cash rate to 0.10%[1] as an emergency response to the COVID crisis.

The implication would be that once the pandemic is controlled the economy will return to something like the pre-crisis “normal” and the ultra-low interest rates will end.

In reality, in this as in many other things, the pandemic has merely accelerated developments that have been underway for a long time.

One is the long-term decline in the “neutral” rate of interest.

More importantly the neutral rate should be one that over time matches the total supply of savings with the total demand for those savings by businesses and households wanting to put them to work making buildings and equipment (capital investment).

‘Neutral’ is less than it was

As Treasury Secretary Stephen Kennedy observed in this year’s post-budget address, the neutral rate of interest has been falling for 40 years[3]. 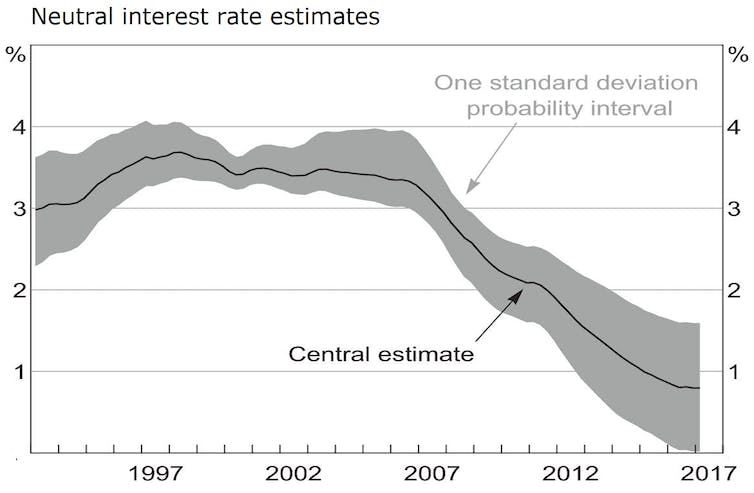 It will have fallen further since, and fallen more sharply since the pandemic began, turning negative.

One way to work that out what the Reserve Bank thinks the real neutral rate is now is to look at where the nominal cash rate is now (near zero) and what the bank says inflation will have to climb to before it will allow the cash rate to climb (2%[6]).

This suggests the bank believes the real (inflation adjusted) neutral cash rate is minus 2%.

Read more: The government has just sold $15 billion of 31-year bonds. But what actually is a bond?[7]

Another way to get a handle on it is to look at long-term real rates, one of the longest being the return on a 30-year US Treasury inflation-indexed bond.

Like the Reserve Bank estimate of the neutral rate for Australia, this estimate for the US fell to around 1% by 2016.

Then it fell further, dropping to close to zero by the start of this year, before turning negative with the onset of the pandemic. 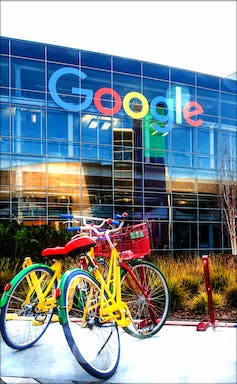 Even Alphabet, the parent of Google, is borrowing at less than the inflation target. Uladzik Kryhin/Shutterstock

Most other countries don’t sell inflation-indexed bonds with such long maturities. But the 50-year and 100-year non-indexed bonds issued by a number of OECD countries are yielding interest rates below 2%, the target rate of inflation for most central banks.

Even highly-rated private corporations like Alphabet (the parent of Google) are refinancing their debt with long-term bonds paying less than 2%[9].

Much of the discussion of declining interest rates has focused on the idea of a “savings glut”, with a particular focus on China, which had very high savings rates early this century.

But China’s savings rate peaked some years ago and is headed down. Savings rates in other countries have been falling as well.

The real problem is a lack of demand for those saved funds.

Corporate profits have grown strongly, but instead of being reinvested they have often been returned to shareholders[10], through either dividends or share buybacks.

Companies seem to believe they don’t need that many funds.

The simplest explanation is that the dominant firms in an information economy don’t need much capital in the form of buildings and equipment to maintain their position.

Read more: Vital Signs. Business investment is flatlining, and it isn't clear that suasion or a special allowance will help[11]

The market value of a typical manufacturing or resource-based firm is usually about the same as the book value of the capital invested in the firm. In the jargon of financial markets, the price-book ratio[12] is close to 1.

Read more: We asked 13 economists how to fix things. All back the RBA governor over the treasurer[13]

Public investment hasn’t come to the rescue enough, even when it has been cheap to borrow.

It’s been tightly constrained by decades of policy driven the ideas variously described as neoliberalism, economic rationalism and market liberalism.

Bank of England economist Lukasz Rachel and former US Treasury Secretary Larry Summers argue that in the absence of the large-scale public programs we have had, the neutral rate of interest would be even lower[14].

When there’s a greater supply of something (savings) than there is demand for it (for investment) the price of it (the interest rate) won’t rise.

After we emerge from the pandemic we are going to have to adjust to a world where interest rates (at least adjusted for inflation) are permanently at or below zero.

As Dorothy says to Toto in the Wizard of Oz (believed by some to be an allegory about monetary policy[15]) “we’re not in Kansas any more”.