There’s a row brewing in the corridors of financial power. The Reserve Bank of New Zealand (RBNZ) recently advised the trading banks that the official cash rate[1] might move from the barely positive into the negative.

Right now the RBNZ is holding off such a move in favour of other monetary stimulus[2] measures. But the big banks strongly oppose[3] negative rates, arguing they’ve had limited success overseas and that the country’s banking technology isn’t up to it.

For the central bank, however, it remains an option to stimulate spending, investment and employment as part of the COVID-19 recovery. By reducing the cost of borrowing, economic activity picks up — or so the theory goes.

Those turning to unconventional monetary policy include Japan, Switzerland and the European Union. Negative rates range[4] from –0.1% to –0.8% for selected tiers of central bank deposits.

In the past, cash rate changes have fed through to changes in loan and deposit rates. For example, a 25-basis-point[5] drop in the cash rate may result in an annual interest saving of $2,500 on a NZ$1 million loan.

At the current low interest rates, however, these changes are no longer passed on — significantly limiting the powers of the RBNZ. 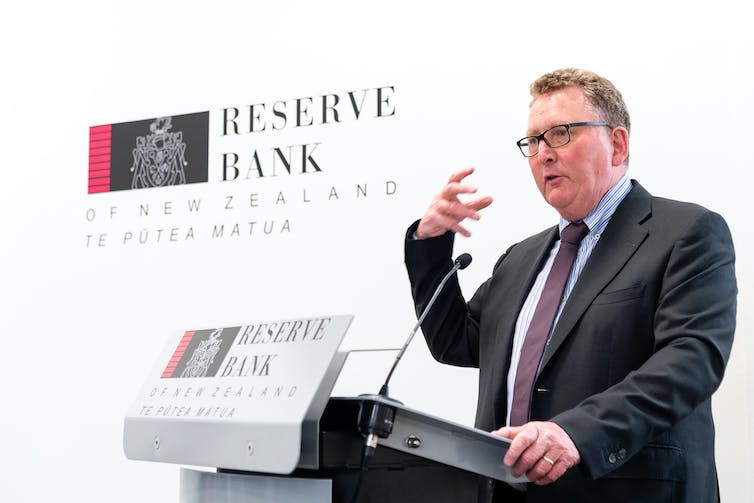 Yes, the bank pays you to borrow

It might sound crazy, but if the lending rate is negative and you borrow an amount on interest-only terms, the bank actually pays you interest every period. For example, Jyske Bank in Denmark is offering negative interest payments[6] by effectively reducing the repayment period.

Banks should be comfortable offering negative rates to borrowers if, in turn, the banks themselves have savings and other funding at even lower rates.

Read more: With house prices soaring again the government must get ahead of the market and become a 'customer of first resort'[7]

But this is the issue: why would savers pay banks to accept deposits? First, they can hold their investments in cash at a zero-interest rate rather than pay a bank. Second, they can choose to invest in riskier assets with positive interest rates.

Because of this, only very large depositors (with limited ability to store cash) tend to leave their money in banks offering negative rates, while ordinary depositors receive a rate of zero or more.

But do negative rates work?

Arguably, the era of monetary policy as a tool for stimulating economic investment and activity has come to an end. Negative rates don’t necessarily translate into productive investment and growth.

Countries that have gone negative have not delivered the expected increases in spending and investment. Furthermore, the difficulty of passing negative rates on to depositors means lending and deposit rates no longer follow the cash rate.

This is also evident in Australia, where a cash rate drop from 0.25% to 0.15% has not been passed on[8] to mortgage borrowers, except in isolated areas such as fixed-rate loans.

The chart below compares the average variable rate on mortgages with the New Zealand cash rate, with the gap growing over time. Charts for Australia and other developed economies would be comparable.

The Reserve Bank of Australia (RBA) has advised borrowers to change lenders[9] if they don’t pass on rate cuts. But there is little central banks can do to offset what is a systemic problem.

What are the risks?

Negative interest rates are unlikely to be the right response to the current COVID shocks. Rather than leading to higher spending, we tend to see the opposite — more saving[10].

In the long run, however, depositors will seek greater returns and move their funds to riskier asset classes, including housing markets, which will push up prices and reduce affordability for new buyers.

Most economists agree inflation is not a concern for now. But what about the medium term? If interest rates climb again, highly leveraged mortgages may be difficult to service.

Either way, negative rates are not a long-term solution to current economic challenges. We need to find ways to make the national economy more flexible, requiring fewer rescue interventions.

The fragility of supply chains and the still limited movement of labour, goods and services should be priorities. New technologies may become key — innovations that enable working from home and organising activities online have already saved whole industries.

Also, the banking system itself needs reform. Banks work on an assumption of once-in-a-thousand-year shocks — but we have seen two in the past 13 years!

After the 2008 global financial crisis, safety buffers in the financial systems were put in place. For example, bank capital requirements were set high, to be run down in economic downturns. Would now be the right time to run them down rather than insisting they be maintained?

Beyond reaching for negative rates, the need to rethink economic fundamentals and create systems that are more resilient to global shocks should be the lasting lessons of COVID-19.