With New Zealand’s May 14 budget expected to chart the way out of the economic crisis, Finance Minister Grant Robertson should be looking to the past as well as the future. Finance ministers elsewhere are facing similar decisions, many even more constrained than New Zealand’s.

But the common claim that we live in “unprecedented times” is not entirely true. Social distancing and other dramatic interruptions to our lives are nothing new.

One clear precedent is the SARS epidemic[1] that hit Singapore, China, Hong Kong, and Taiwan in 2003. Other more localised but catastrophic examples, such as the Haiti earthquake of 2010 or the 2004 Indian Ocean tsunami, are also instructive.

What is different is the scale of the current crisis. Economies everywhere are in freefall and unemployment is rising. Gross domestic product figures for the first quarter of 2020 show economic declines not seen since WWII. The second quarter is predicted[2] to be even worse.

The challenge for governments is to manage both expectations and spending to drive recovery. Despite the fast-tracking[3] of so-called “shovel-ready” construction projects, that does not necessarily mean infrastructural spending is a magic bullet.

An alphabet of possible recoveries

There are four plausible recovery trajectories. A V-shaped recovery suggests the affected economies will rebound rapidly after lockdown. A U-shaped recovery entails a similar return to normality but after a longer downturn.

The W describes a second hit to the economy, most likely from a second wave of infections (as happened in the second winter of the catastrophic 1918-1919 flu pandemic[4]) but potentially also caused by misguided economic policies. Most worrisome here would be premature withdrawal of government spending support.

The worst case is L-shaped, in which the economy takes many years to come back.

Recovery from SARS was V-shaped in all the affected economies. While SARS spread to many fewer places and disappeared more quickly than our present nemesis, social distancing in the four affected countries was not dramatically different. Fear at the time was as palpable as it is now.

Taiwan, Hong Kong and Singapore all experienced a dip in GDP growth in the first half of 2003. But by the third quarter their economies were growing fast again. Statistical analysis we did for the Asian Development Bank found the epidemic did not have any longer-term adverse effect on these three economies.

China is a much bigger country, but even when we looked at its two hardest-hit regions, Guangdong and Beijing, the picture was the same – a V. We could see this from economic data from the Chinese National Bureau of Statistics, and with satellite images of night-time light emitted by urban-industrial areas.

These data suggest there was some re-orienting of economic activity after the SARS epidemic (as observed in the diminished night-light) but very little long-lasting effect on aggregate incomes. The same rebound may be happening right now in Wuhan which emerged from lockdown in March this year. 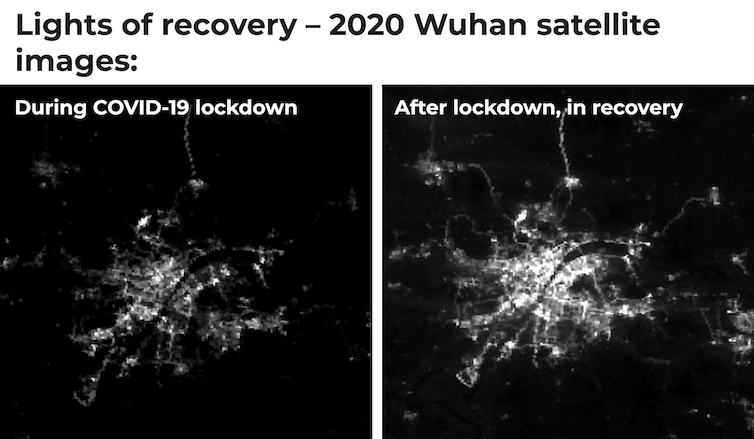 CC BY-ND[6] SARS affected, drastically but briefly, only a few countries in East Asia (and Toronto, due to travel-borne infection). Each had the institutional capacity and financial resources to successfully mobilise recovery once the infection had been vanquished. The data from recoveries after other types of disasters tell a similar story. Except for very poor and chaotically-governed places (such as Haiti[7]), countries tend to recover quite rapidly. This is true for Indonesia[8] and Sri Lanka[9], hardest hit by the 2004 Indian Ocean tsunami. Their recovery was fuelled by generous assistance from abroad and large mobilisations at home. Read more: Coronavirus hasn't killed globalisation – it proves why we need it[10] Targeted funding and managing fear to recover faster Two main observations emerge in this rear-view mirror. The first is that the targeting of recovery funding is crucial[11]. After previous shocks, when regions or cities failed to recover completely, it was usually because the recovery was under-resourced or funding was mis-targeted. Unlike a natural disaster, the damage associated with COVID-19 is not to infrastructure. It is to employment in specific sectors such as tourism and culture. Policies should therefore target the maintenance of labour markets (even if it means sustaining them on life support) rather than spending on more infrastructure. Read more: How a one-off tax on wealth could cover the economic cost of the coronavirus crisis[12] “Shovel-ready” projects were critical after the 2008 global financial crisis, when the disruption was largely to the construction/housing sector. A construction injection now will not provide work for most of people who have lost their jobs in restaurants, hotels, retail, or travel. Spending on better and greener infrastructure, when the existing infrastructure is crumbling or dangerous, is good policy in and of itself. But it will not provide the necessary antidote to our current malaise. Secondly, recovery depends crucially on expectations. In those cases where the shock significantly increased[13] the fear of future shocks, recovery was slower. Households and businesses were more reluctant to buy and invest. Without assurances that we have “solved” COVID-19 – with a vaccine or effective control – a full recovery is going to be impossible. The longer it takes, the more our recovery will be shaped like a drawn-out U rather than a V. As the Economist magazine recently put it, we will have a 90% economy[14]. Without a good public health response we might even risk a W, where a second wave of infection requires further harsh but necessary social distancing. Without managing expectations about a COVID-free future, and without aggressive but well-targeted government action, the post-pandemic trajectory will look like an L. That will put a far greater burden on future generations than any debt governments might take on now to develop a vaccine or keep businesses afloat and people on payrolls.