A wedding is one of the biggest expenses in Timor.

The bulk of the cost comes from the “barlake[1]”, a Tetum word which can be translated as “dowry”, or “bride price”, even though the exchanges are usually two-way between the bride and groom families.

Each has different purposes and are exchanged at recognised exchange rates[2].

The total expenditure on a traditional wedding, including the barlake, can reach $US5,000 to $US20,000, depending on the socioeconomic background of the couple’s families.

Much of the population is not in formal employment[5].

For most Timorese, going without a traditional wedding is unthinkable. It consolidates one of the most important social relationships and is the platform used to manage social debts.

A husband who married a bride from Los Palos in Southeast Timor described the obligations to me in this way:

My father-in-law gave me a “price list” that I would have to pay before marrying my wife, such as my wife’s education costs at university, which were 10 buffaloes.

We lived together for a few months before we were officially married, and that was 6 buffaloes, my boarding in their family house is 2 buffaloes, and others I could not remember.

Many Timorese postpone marriage, despite having children. 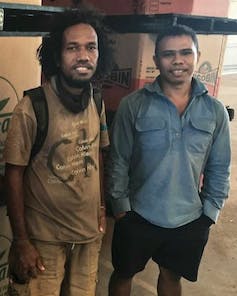 Abino and Floriano in Kununurra as part of the 2017 Seasonal Worker Program. Ceres Farm[6]

Australia’s Seasonal Worker Program[7] has played host to more than 2,000 workers from East Timor (and many more from other Pacific nations) since it began 2014.

A study of seasonal workers who had returned to Timor found half rated “customary obligations” as one of the top five[8] uses of the funds they sent back, along with starting a business, buying a vehicle, buying land and home improvements.

A worker who who had just completed a season told me:

I would like to get married, but the price is unaffordable. I could have worked for my father-in-law in the rice field for many years if I was not given the chance to get into Seasonal Worker Program. We have one three year old child already, it is just the wedding has not yet happened.

Funding a big wedding with remittances from Australia demonstrates financial capacity and status.

Remittances push up marriage rates among those who return and also allow them to marry partners who would normally be unattainable. Timorese parents ask more for high status marriages.

Read more: Why yet another visa for farm work makes no sense[9]

Australian remittances enable participants to get the emotional bonds, security and business connections inherent in marriage they might otherwise miss out on.

And they enable them to “marry up”, at least personally breaking free from the confines of a class-ridden society.