For many of us, our first experience with “gambling” was the lucky dip at the local school fete. We handed over our pocket money and hoped the plain packet we selected would contain something worth our 50 cents.

Now the lucky dip has been reinvented and become ubiquitous in the form of the blind bag toy[1].

Blind bags (also referred to as surprise packs or surprise toys) involve small and collectible toys hidden inside opaque packaging. There are now hundreds of different blind bag lines, from old favourites such as My Little Pony, Transformers and Teenage Mutant Ninja Turtles to new fads like Tokidoki, Zomlings and the hugely popular L.O.L. Surprise! dolls. 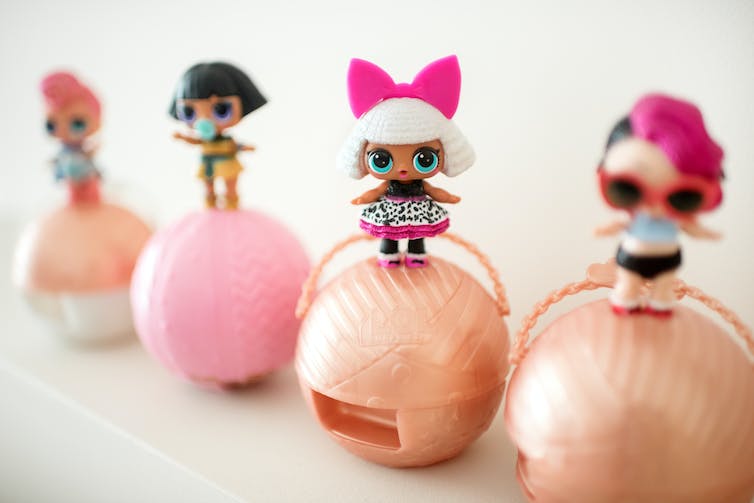 Though no statistics for global blind bag toy sales are available, data from the United States give an indication of their phenomenal growth in recent years. Between 2017 and 2018, market analyst NPD[2] estimates the blind bag market in the US grew by about 60% even while total toy sales fell 2%[3].

Not surprisingly the US Toy Association[4] declared “The Big Reveal[5]” its top trend for 2018, with “the act of removing a surprise toy from a blind bag” being “just as exciting as the toy itself”.

Read more: The power of rewards and why we seek them out[6]

There’s no reason to think 2019 will be any different in the US or around the world. Indeed, if toy aisles in stores are anything to go by, buyers’ appetite for blind bags appears to be ballooning.

The factors driving this sales growth include social media – in which “unboxing” has become an entertainment in itself – and the growing adult market for toys.

But the three most potent elements are the combination of price, the appeal of collecting and the psychological lure of surprise. It’s these three things that make blind bag toys so ethically problematic.

Compared with other options, blind bag and surprise toys seem cheap. In Australia, prices range from about A$1.60 to A$15. This makes them attractive to children and adults alike, particularly as stocking stuffers at Christmas.

But the problem is that one is never enough. 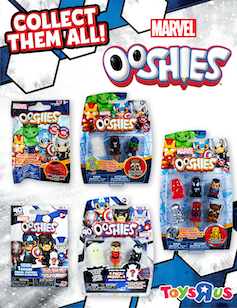 Collect them all! Marvel Ooshies advertising.

Almost all blind bag toys are marketed as collections – with “collecting them all” emphasised in packaging and advertising. There may be dozens to collect. Ooshie maker Head Start International, for example, has released four series of Marvel Ooshies with a total of 164 toys to collect.

So despite not being very costly to buy once, the costs add up.

As we’ve noted before in discussing the Ooshies phenomenon[7], collecting is attractive to children. While an estimated 30% of adults collect something[8], more than 90% of children[9] do so. Collecting appeals to children’s natural curiosity[10] and is also a way of understanding the world[11] through gathering and categorising.

Read more: Ooshies – a cautionary toy story about cashing in on childhood innocence[12]

The blind bag business model weaponises this collecting impulse through the gamble of the lucky dip. It combines the pleasure of reward with the element of surprise, which is both compelling and addictive. It taps into the same psychological mechanism that results in gambling addiction[13] – namely intermittent reinforcement[14].

The seductive, manipulative power of intermittent reinforcement[15] (also known as variable ratio reinforcement) was famously shown in experiments with pigeons in the 1950s led by the noted American psychologist B.F. Skinner[16].

His team trained pigeons to peck a small lever that led to a food reward. When rewarded every time, the pigeons pecked the lever only when they were hungry. But when rewarded intermittently, they became compulsive peckers.

Th effects of intermittent reinforcement have also been demonstrated in clinical tests with children[17].

This helps explain the phenomenal growth and profitability of blind bags for toy companies. With the outcome being uncertain and the reward intermittent, the dopamine rush of opening each new bag is maintained.

A virtual form of blind bag is proving even more profitable for video game companies. They’re known as loot boxes, which players can buy with real money in the hope of scoring “equipment” or “skins” to enhance their game avatar. More often than not they don’t contain anything the player wants. Which is why players keep buying.

A study this year estimated loot boxes could be worth US$30 billion[18] a year to the video game industry.

Concern about loot boxes effectively exposing children to gambling has led to calls in many countries for greater regulation. Belgium has banned them[19]. In Britain, the government is considering making companies that make money using loot boxes hold a gambling licence[20]. In Australia, the federal government says more research is needed before it will regulate.

How different is a blind bag toy?

Maybe you are always assured a toy, but the relative scarcity of different toys in a series means some are worth much more than others, and the desire for those will drive further purchases. It’s a business model that still fundamentally works on the same principles that make poker machines, scratchies and other forms of gambling so addictive.

So while blind bag toys can be fun, the use of “blind” packaging and intermittent reinforcement to drive sales must be considered ethically problematic, especially given they are targeted at children.

As in all things, awareness and moderation are key.