On January 26, 2011, Coles fired the first shot in what would soon be dubbed the “supermarket price wars”[1] by reducing the price of its own-brand milk to A$1 per litre. Woolworths fired back, triggering seven years of intense price competition.

But now Coles has waved the white flag, indicating a move away from price-based marketing[2], to a focus on other attributes, such as sustainability, local produce and community.

While operational costs (wages, rent, bills) remain fixed or go up, prices can’t keep coming down. You eventually run out of margin.

In contrast, Woolworths announced an 11.1% increase in earnings for their supermarket business[6]. But Woolworths dropped their “cheap, cheap” price cutting campaign nearly two years ago[7].

Read more: Down, down but not different: Australia's supermarkets in a race to the bottom[8]

Other retailers also get caught in the cross fire of price cutting. Case in point is Aussie Farmers Direct, which fell into administration this week saying they were[9]:

…no longer able to compete against the domination of the major two supermarkets.

While it may be overly simplistic to blame the two big supermarkets for the downfall of Aussie Farmers Direct, price conscious consumers and thin grocery margins certainly contributed.

How this strategy came about

Supermarkets are now looking beyond price to stand out.

Both Coles and Woolworths are very similar in the brands they offer, prices, layouts, weekly specials and online channels. The move away from price gets shoppers thinking about what is unique to each chain.

So, rather than price, the focus has shifted to service quality, social programs[10] and connecting with the community[11].

Shoppers who are continually exposed to loyalty program logos, may eventually stop noticing these logos, or “switch off”. This is because of a behavioural tendency called “habituation”[13]. 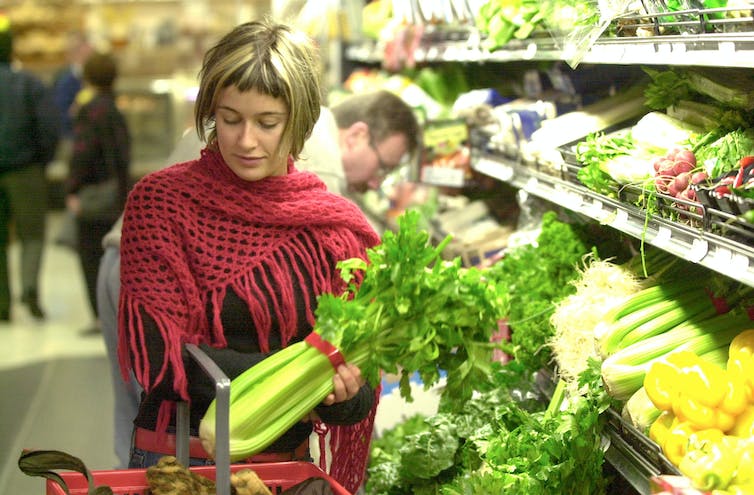 What these new strategies are trying to sell

So, if Coles are no longer selling themselves on price, what are they selling?

Coles’ new approach is more subtle, selling themselves through aspirational stories and employing classic advertising techniques[14] to do it.

These techniques are used in advertising to convey positive feelings and emotions associated with a particular experience. A simple way to achieve this in advertising is to feature people telling their own stories – as seen in the new Coles advert launched this week.

With the Commonwealth Games near, both supermarkets are also featuring sports stars in their marketing. Woolworths new campaign features[15] athletes and their connection with fresh food, positions the company, once again, as “Australia’s Fresh Food People”.

Meanwhile, Coles have partnered with Uncle Toby’s for their Sports for Schools[16] campaign. Their advertisements feature an array of young, fit, attractive and successful athletes linking the athletic success with the purchase of products from Coles.

By moving away from price and focusing on a story telling strategy, both supermarkets can engage consumers with a process called “internalisation”[17]. This is where people accept the endorser’s position on an issue as their own.

Internalisation is a powerful psychological mechanism because even if the source used in the campaign is forgotten, the internalised attitude usually remains. Price doesn’t create this effect.

While food prices won’t necessarily go up any time soon, consumers shouldn’t expect to see any further significant price drops. Instead, Coles and Woolworths will draw attention to other important attributes.

Faced with the expansion of Aldi across South Australia and Western Australia[18] and the entry of German supermarket Kaufland[19], Coles has recognised they can’t keep fighting a battle on price alone.