Reforming negative gearing could save the federal government A$1.7 billion without hurting “mum and dad investors”, according to our new modelling[1], by focusing tax deductions on investors with smaller property portfolios and removing them for richer investors.

Negative gearing [2]allows investors to claim a tax deduction if their rental income is less than their expenses. It cost the federal government A$3.04 billion in 2013-14, according to our calculations.

According to Treasury modelling[5], the Labor Party’s plan[6] to limit negative gearing deductions on newly acquired rental housing would put relatively modest downward pressure on house prices. Preliminary research from Melbourne University[7] has found that eliminating negative gearing would result in an increase in home ownership.

Nevertheless, there are concerns[8] that reforming negative gearing would harm the financial wellbeing[9] of mum and dad investors.

But using data on the distribution of property and incomes makes it possible to differentiate between poorer and wealthier investors, allowing the government to target reforms to cushion the blow for investors on lower incomes.

In our example, investors in the bottom half of the income and property distributions could be allowed to claim tax deductions for all allowable rental expenses. Those in the 51st–75th income percentiles could deduct 50% of those expenses, while negative gearing would be eliminated for those in the top 25% of incomes.

Our modelling of this scenario shows this would save the federal government A$1.7 billion, or 57.3% of the current cost to the budget, each year. If negative gearing deductions were limited based on property values, the saving would be A$1.5 billion (or 48.3%).

Who benefits from capital gains tax?

Our research also identified that the capital gains tax discount has been a significant factor in the growth of negative gearing since 1999, as investors are able to claim a rental loss but do not pay full tax on later capital gains[14].

Home owners who also own at least one rental property receive the highest capital gains tax benefits. Our analysis showed this group has an average property portfolio valued at over A$730,000.

This would reduce the difference between the tax payable by higher and lower income rental investors, and therefore reduce inequities in the current system. 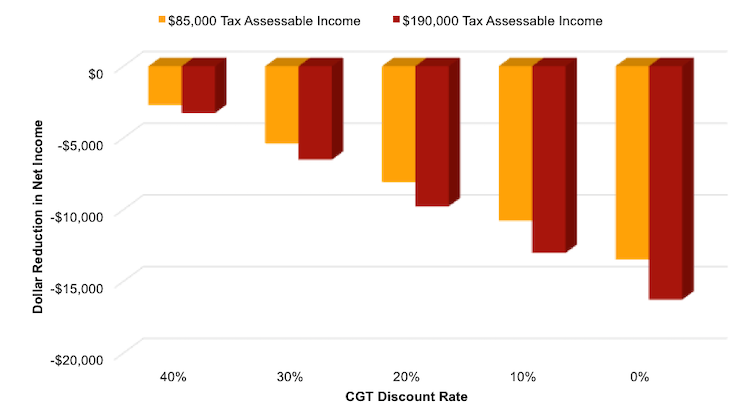 Author provided, Author provided Our modelling[16] shows benefits of negative gearing are skewed towards more affluent investors in middle age and in full-time employment. Investors aged over 55 or who aren’t in the labour market (those who are unemployed, retired or not working) benefit the least from negative gearing. We need to change the way we tax housing to create a more equitable and sustainable housing market. But this needs to be done (and communicated to investors[17]) in a way that limits the risk of a shock to the market if investors exit the housing market. Policymakers have been reluctant[18] to change the fundamental settings of the tax system, but our modelling shows it can be done in a way that limits the impact on poorer investors. The main limitation on this reform is behavioural, determining how investors will react to the effects of tax changes. Housing reform is complex, involving a range of market factors as well as the tax drivers.