John Setka, the controversial union official who Labor leader Anthony Albanese wants expelled from the party[1], is known for wearing a t-shirt emblazoned with a cobra. If the snake symbolism isn’t immediately clear, a slogan spells it out: “If provoked, we will strike.”

Such militant imagery still seems to resonate in the Construction, Forestry, Maritime, Mining and Energy Union, whose Victorian branch Setka heads, but its wider appeal is on the wane. 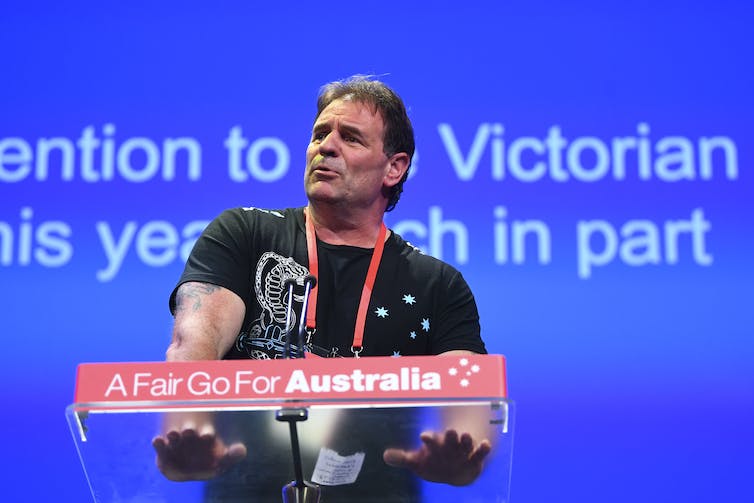 Withdrawing labour, the traditional unionist’s weapon, is being blunted not only by declining rates of union membership but restrictive laws. The right to strike, according to Sally McManus, head of the Australian Council of Trade Unions, is “very nearly dead[2]”.

To find a path forward, it makes sense to look at those unions for whom striking has always been problematic. Public-sector teacher unions, for example.

Teachers do go on strike, as demonstrated by actions in the United States[4], France[5], Poland[6] and even South Australia[7]. But striking doesn’t hurt their employer financially at all. Mostly it just inconveniences parents, who must find alternative child-minders.

My doctoral research[8] suggests the traditional weakness of teacher unions has become their strength, by forcing them to experiment with other strategies to achieve their aims.

Now teachers are more the “union heartland” than blue-collar workers. Union membership in the education and training sector is about 33%[9], compared with 15%[10] generally.

Here are four lessons other unions can learn from teacher unions.

Read more: Why wooing women is the way forward for trade unions[11]

Resistance has its place, but my research into the NSW Teachers’ Federation suggests it has effectively secured better outcomes for its members through identifying points of common interest and co-operating[12] with the powers that be.

In particular, it has constructively supported the agenda to improve teacher quality, on the basis that better pay and propects would go a long way to attracting, motivating and retaining talented teachers. The NSW government’s blueprint to improve teaching quality and learning outcomes[13] grew out of the shared concerns of the teachers union and the NSW Department of Education.

2. Connecting with the community

In line with leveraging the concern of its immediate employer, public-sector teacher unions have shown the importance of appealing to their ultimate employers: the general public.

The Australian Education Union, which represents public school, early childhood and TAFE teachers, has run a community-focused campaign [14] to improve school funding. To win hearts and minds, the union has told the stories[15] of what some schools have achieved with more funding. The campaign has included a national bus tour[16], billboards[17] and door-knocking[18]. 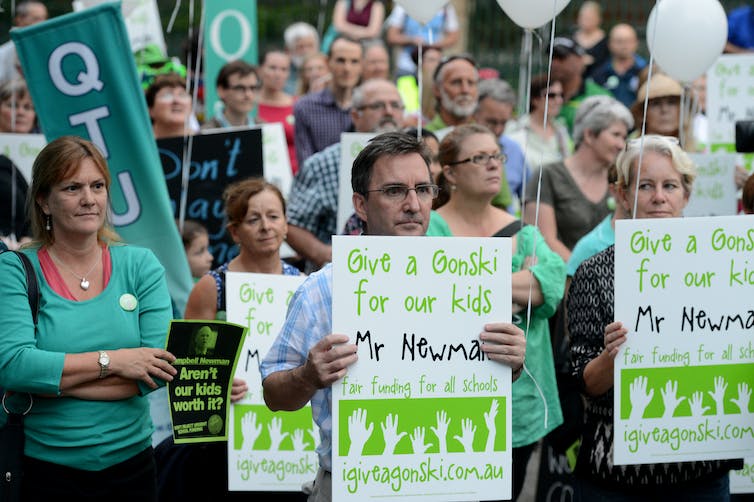 Teachers in Brisbane rally for reforms to federal education funding in 2013. Dave Hunt)/AAP

3. Beyond wages and conditions

The first two lessons lead to the third: the usefulness of finding imaginative ways to advance members’ interests. Historically unions concerned themselves only with wages and conditions. Now, at a time of low wages growth[19], unions need to consider taking on other concerns.

The NSW Teachers’ Federation has done this in seeking to cater to its members’ professional concerns. It has established a Centre for Professional Learning[20]. The centre offers a range of professional development courses, publishes a journal and produces a podcast.

4. A sense of ownership

One of the systemic problems facing unions is the increasing prevalence of casual and gig work, where workers see little point in joining a union. This is particularly evident among young workers, with just 6%[21] of those aged 15-24 years being union members. The problem is so dire it has even been suggested unions should offer young workers free memberships[22].

There’s research, however, to suggest the solution is to improve feelings of belonging to their union[23]. The United Voice Union has tackled this problem in the hospitality sector by establishing an experimental “digital union”, Hospo Voice[24], to appeal specifically to hospitality workers.

The NSW Teachers’ Federation, in the face of increasing numbers of teachers being on temporary contracts, has put more resources into recruiting them. Over the past 15 years it has increased member numbers from less than 3,000 to more than 10,000 members.

A time to change

These are hard times for all unions. There is no silver bullet. But what recent history, including the case of John Setka and the CFMMEU, suggests is that old-style union militancy may be on its last legs.

To stay relevant, unions need to commit themselves to breaking old habits, not breaking the law. The time is ripe to reflect on renewed strategies for worker justice.