We now know the Bureau of Statistics did quite a bit of soul-searching before producing the bland and ultimately misleading press release headed “Inequality Stable Since 2013-14[1]” last month.

Late last week we pointed to the odd way in which the release included no data to back up the claim[2], and how journalists from the ABC[3] and Sydney Morning Herald[4] and Age quickly discovered the statistics it purported to summarise actually showed wealth inequality climbing. 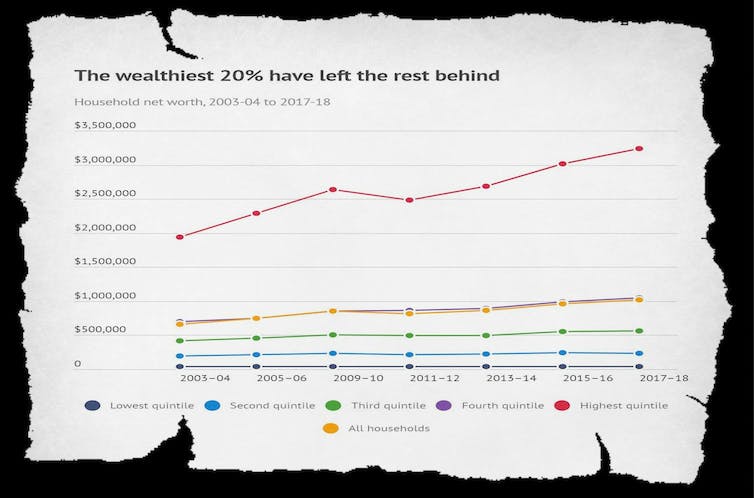 Sydney Morning Herald[5] On Wednesday in The Guardian[6], Paul Karp revealed the contents of documents released under freedom of information laws that shed light on the creation of the press release. An earlier draft had pointed to a “significant increase” in wealth inequality compared with 2011–12 and 2003–04.

Australian Bureau of Statistics disclosure log[7] The phrase “significant increase” didn’t survive the editing process. A reference to a measure of wealth inequality being “at its peak” since it was first comprehensively measured in 2003-04 was also removed after a direction to “focus on income over wealth”.

Australian Bureau of Statistics disclosure log[8] Another email noted there has been “a significant (downward) change” in the wealth share of the bottom fifth of households, but added: “I’m not sure that we want to draw attention to this though??”

Australian Bureau of Statistics disclosure log[9] The Bureau responded to the Guardian article on Wednesday, saying it had not attempted to misrepresent the data, and that it prepared the press releases “internally with no external influence[10]”. It’s not just the ABS 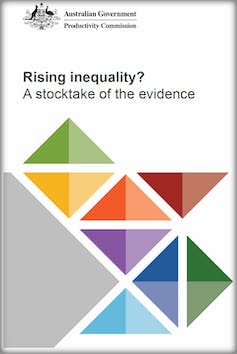 Productivity Commission[11] It’s not only the Bureau of Statistics that has found it difficult to draw attention to increasing wealth inequality. In August last year the Productivity Commission released what it called a stocktake of the evidence on inequality, titled “Rising Inequality?[12]”. It wasn’t so much a “stocktake of the evidence” as a showcase of new specially assembled evidence that conflicted with a wider body of evidence that shows wealth inequality increasing. The Commission’s contribution presented the wealth shares for the top 10% of Australian households only. These came not from publicly available data, but from “confidential unit record files” made available to approved users by the Australian Bureau of Statistics. We have presented the microdata in its raw form below, alongside four other well-established and widely published series. 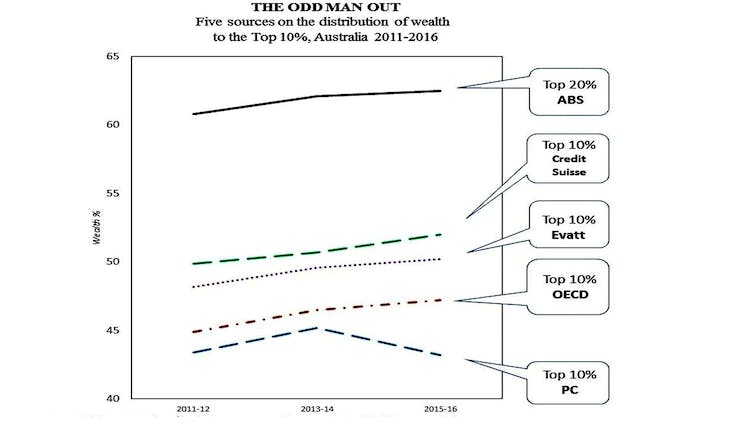 For notes, see full paper: Inequality stocktake ... or snowjob? Evatt Journal, November 2018[13] The striking feature is that every line except the Productivity Commission’s shows inequality increasing since 2011. The data from both Credit Suisse (on which Oxfam bases its research) and the Evatt Foundation[14] suggest that the top 10% now own more than half the nation’s household wealth, and the Organisation for Economic Co-operation and Development’s 47.2% is just a little less. The Productivity Commission is an outlier in finding the top 10% own closer to 40%. Its finding that the share has been falling between 2013-14 and 2015-16 makes it even more of an outlier. Beyond the bland headline, the latest statistics from the Bureau confirm our analysis of growing wealth inequality. The Commission’s results are implausible Our suspicions were aroused when the Productivity Commission’s results appeared to be incompatible with the Bureau’s published findings, of which they were a subset. The Bureau’s data showed the share of wealth held by the top 20% climbing, while the Commission’s series showed the share held by the top 10% falling – implying that the share of the next top 10% must have been climbing quite a lot. The divergence strained credulity. There are no advantages in accumulating wealth that apply to households in the second top decile that do not apply with at least equal force to those in the top decile. Read more: Don't believe what they say about inequality. Some of us are worse off[15] Without an outside explanation (such as an extra tax applying only to the top 10%) the result is so improbable as to seem impossible. Other data available from the Bureau at the time showed that the ratio of the wealth of households 10% from the top to the wealth of those 10% from the bottom had climbed, while at the same time the Commission found the wealth share of the top 10% overall had fallen. Unfortunately, the Commission gave pride of place to its own findings over and above more conventional findings, and used a question mark in the title of its paper “Rising Inequality?[16]” to imply that it might not be. As we wrote here last week, wealth inequality and its effects[17] matter. Australians need the truth about how much it is growing. Read more: What the Bureau of Statistics didn't highlight: our continuing upward redistribution of wealth[18]