The HILDA Survey tells the story of the same group of Australians over the course of their lives. Starting in 2001, the survey now tracks more than 17,500 people in 9,500 households.

Growth has been particularly strong among women in their early to mid 20s. For example, in 2001, 30% of women aged 22 to 25 were living in the parental home, while in 2017, 58% were doing so. In other words, the gap between young women and young men is shrinking.

Traditionally, women have partnered and had children at younger ages than men. That’s linked to the fact that women are more likely, on average, to leave the parental home at a younger age than men.

The tendency for women to marry and have children at younger ages still exists, but it no longer translates to a greater propensity of young adult women to be living apart from their parents.

But this doesn’t accurately convey the magnitude of change. A growing proportion of young adults have not moved out at all. Consequently, the average age of moving out is considerably higher and has grown more than these numbers suggest.

Rate is high in Victoria, growing fast in Queensland

The trend is happening right across the country, although there are regional differences.

Comparing across the states, over 60% of Victorian young adults live with their parents, followed by 56% in New South Wales and approximately 53% in the other four states.

However, Queensland has experienced higher growth compared with most of the rest of the country, the proportion of young adults living at home rising from 31% in 2001 to 52% in 2017. 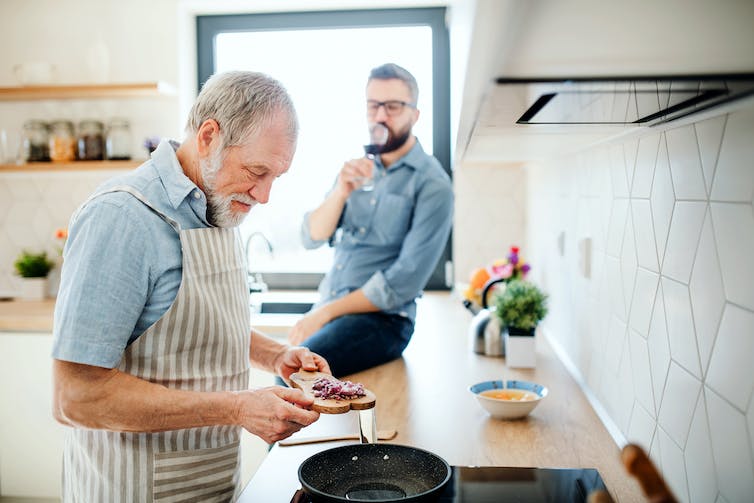 A growing proportion of young adults have not moved out at all. Shutterstock

Looking at the country versus the city, the propensity to be living in the parental home is, perhaps surprisingly, relatively similar in non-urban areas compared with the major cities.

It is towns and cities of less than 100,000 that stand out as having lower rates of living with one’s parents. This is consistent with housing costs being lower in those regions compared with the major urban centres.

Housing costs are also relatively low in non-urban areas, so you might think that the proportion of young adults living with their parents should also be lower in these regions. But young people in the country tend to move to the city, so they show up in the data as living in urban areas.

There has been a slight increase in women moving back into the parental home, particularly among those aged in their early 20s. However, the data tell us that most of the growth in young people living with parents has been among those young adults who never moved out in the first place.

A number of mutually reinforcing economic and social factors are likely to be driving the overall trend towards staying in the parental home longer.

Of course, the cost of housing is a big factor, and it’s been rising faster than inflation and incomes.

It appears harder these days for young people to find full-time permanent employment opportunities. In particular, casual employment has risen for young adult men and women since around 2009; by comparison, it has only increased slightly for older men and has actually declined for older women.

There has also been growth in education participation of young adults, especially among those aged 25 and under. Interestingly, however, among those aged 18-21, the proportion of those living with their parents engaged in full-time education has fallen in recent years. This may reflect the growing importance of housing costs and the labour market in keeping young adults at home. The growth in education participation appears to have mainly been a factor up until 2011.

Changes in the preferences of young adults may also be a factor. It is possible that our longer life expectancy is increasing the desire to “live a little” before taking on the challenges and responsibilities traditionally associated with adulthood.

Certainly, young adults seem to be in less of a hurry to settle down and have children. For example, the median age at marriage has risen by 1.5 years[3] since the turn of the century for both men and women; similarly, the average age of mothers at first birth has been creeping upwards and is now around 29[4].

It is difficult to ascertain the relative importance of changing economic realities facing young adults versus changes in their preferences.

But one thing is clear: it could not happen without the capacity and willingness of parents to accommodate their adult children. So perhaps, ultimately, we should be looking to their parents for an explanation of this trend.

Read more: Interactive: how have your family's fortunes changed? Use this drag-and-drop tool to find out[5]