This year’s Australian Conference of Economists[1] takes place in Melbourne on July 14-16.

During the conference The Conversation will publish a selection of pieces written by the authors of papers to be delivered at the conference.

Since the surprise re-election of the Coalition, there has been renewed debate about the role the “aspirational” Australian played in the final outcome. The debate is taking place against the backdrop where income inequality has been growing in most developed countries over the past half-, including in Australia.

Bureau of Statistics figures released on Friday show that the wealth of Australia’s wealthiest households has grown much faster[2] than the wealth of the rest.

Household net worth by quintile (top fifth to bottom fifth)

Over the course of the 20th century, income equality has been U-shaped, a point noted by French economist Thomas Piketty [4] and Australia’s Productivity Commission.

Wealth inequality has also followed a long term U-pattern, and in many countries wealth is even more concentrated than income.

The Productivity Commission finds that in Australia, a person at in the top 10% of wealth distribution has 40 times[5] as much wealth as a person in the bottom 10%. That person has four times as much income.

Income shares of the top 1%, by country

Per cent of unequivalised gross taxable income earned by the top 1% of adult income earners, 1913 to 2013. Productivity Commission, 2018[6]

In a paper to be presented to the Australian Conference of Economists in Melbourne on Tuesday, my colleague Monica Jurin and I shed light on wealth inequality over the past three decades through the lens of Australia’s super rich – the richest 200 households and families.

The super rich are changing 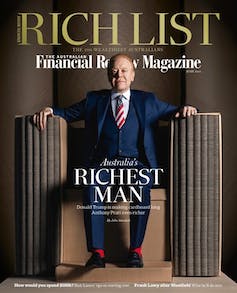 The BRW/AFR Rich List, updated since 1984[7] Based on the Rich List[8], compiled by the Business Review Weekly since the 1980s, and now updated annually by the Australian Financial Review, we examine the importance of inherited wealth versus entrepreneurship among Australia’s super rich. The Rich List confirms the rise in wealth inequality. In 2019, the richest 200 families accounted for 3.6% of the aggregate net worth of all Australian families, up significantly from 2.3% in 1989. But the importance of inherited wealth appears to have diminished. Those with inherited wealth and family businesses today make up one-third of the super rich, well below 43% in 1989, with a gradual decline over each of the past three decades. Inherited wealth by itself accounts for 37% of the Rich List’s net worth today, well below 55% in 1989. Read more: They're rich, unelected and shaping public policy[9] The emergence of technology entrepreneurs such as Mike Cannon-Brookes and and Scott Farquar[10], founders of software company Atlassian, stand out. Today, the technology sector accounts for almost 8% of the Rich List’s net worth, compared to almost none in 1989. The results seem somewhat less egalitarian when we examine whether those on the list have appeared on it before. They’ve more persistence, less inheritance For instance Frank Lowy, co-founder of Westfield, is considered to be self made. But once on the list, he remained on in each of the four decades we examined. Whatever the sources of one’s entry to the Rich List, members like Mr Lowy provide evidence of persistence. Conditional on being on the list a decade earlier, members have a slightly higher probability of remaining on it than they did in 1999, controlling for death and other factors. Our findings complement those of Steven Kaplan and Joshua Rauh[11] who observe similar patterns in the Forbes 400[12] list in the US. Here, and in the United States They find that inherited wealth has become less important and being college educated has become more important. In Australia we find that a substantially higher share of the richest individuals are tertiary qualified today than they were in 1989, but we are reluctant to draw strong conclusions because the entire society has greater access to tertiary education than it did in 1989. The super rich have occupied a unique place in modern Australian culture since the emergence of conspicuous entrepreneurs and the emergence of the Rich List in the 1980s. They are changing, and probably in a good way, even as inequality is growing. Read more: Egalitarian or Edwardian? The rising wealth inequality in Australia[13]