The Banking Royal Commission landed after the stock exchange closed for business on Monday. It recommended additional controls on banks and financial services providers, and excoriated one.

But the banks’ share prices surged on Tuesday as almost A$20 billion was added to the value of the big four – their biggest one day increase in value in history.

Even the National Australia Bank, whose chairman and chiefs came in for stinging criticism, did better than the market, jumping 3.9%, athough not as well as the rest of the big four.

The shares of the best-performing bank, Westpac, jumped by 7% on a day when the total share market index climbed 2%.

Also surprisingly, it happened on the day leading up to the report’s release. Westpac’s shares jumped 1.8% when the market climbed 0.5%. 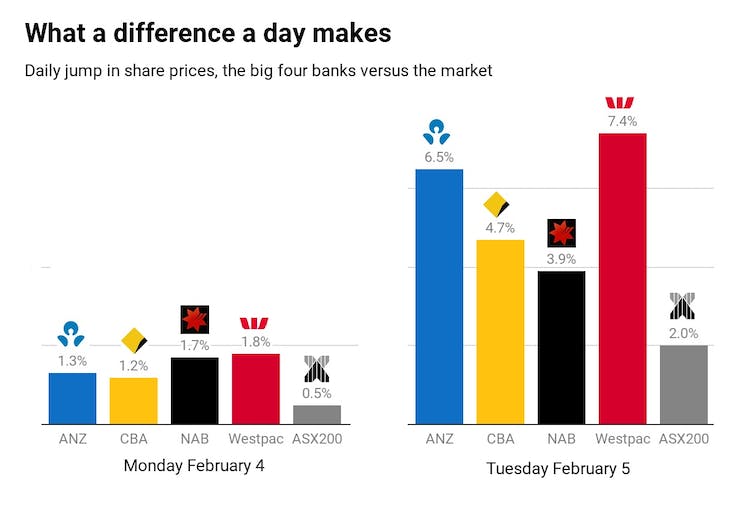 On the face of it, it’s hard to understand. But there are clues in the report itself and in the government’s response to it. 1. Recommendations not as strong as feared The report was a pleasant surprise to shareholders who were expecting worse[1]. They might even improve the financial performance of banks. It was feared the report might recommend a separation of banking businesses from financial advice businesses. Instead it went for the status quo, noting that breaking up the big banks would be costly and disruptive. It encouraged regulators to be more stringent and take banks to court, but in practice that needn’t change much. Courts often encourage settlements, which is partly why the Australian Securities and Investments Commission seeks enforceable undertakings. Settlements are cheap, which is good for the banks, and they have teeth, which is good for ASIC, as indicated recently when a unit of the Commonwealth Bank breached an undertaking and was banned from charging fees until further notice[2]. Read more: Hayne's failure to tackle bank structure means that in a decade or so another treasurer will have to call another royal commission[3] ASIC appears circumspect[4] about a proposed increase in litigation, worrying that if it happens at all it might cost it cases and the prospect of obtaining compensation for victims. And many recommendations only tangentially affect banks. For example, the report recommends an end to commissions for mortgage brokers, which will lower some bank costs (they won’t need to pay the commissions) and increase others (they might need to employ more of their own staff to do what brokers did), probably having little effect either way. 2. Government’s response measured There was a fear the government would use the report to engage in kneejerk political point-scoring, promising excessive regulation and interference in the financial service industry with little regard for the consequences. Instead it has done no more than say it will act on the the report’s recommendations. It has made clear[5] that it won’t hurt banks for political purposes. It has remained cognisant of the need to avoid making customers collateral damage if regulatory changes caused a credit squeeze. 3. Some recommendations could help The banks have already done much of what’s been asked, meaning it has already been incorporated into their share prices. The extent varies between banks. For example, Macquarie restructured advisor fees[6] before the final report came out. Other banks have not. In some cases the report sets out standards that bankers ought to be following anyway, and would have been better off if they had been. They relate to conflicts of interest, corporate governance, and internal controls. While shareholders might benefit in the short term from bankers’ misdeeds, they don’t help them in the long term. Improving governance and internal controls could in fact ultimately help shareholders. The royal commission could have been much worse for banks. Some of it might actually be good.