Imagine going to the store and finding that nothing has a price tag on it. Instead you take it to the cashier and they calculate the price. What you pay could be twice as much, or more, than an hour earlier. That’s if there is even anything left in stock.

This is the economic reality that underpins Venezuela’s current “political crisis” – though in truth that crisis has been going on for years.

The government headed by Nicolás Maduro, who has presided over Venezuela since 2013, declared a state of emergency in 2016. That year the inflation rate hit 800%. Things have since gone from bad to worse.

About 3 million Venezuelans[2] – a tenth of the population – have fled the country. This is the largest human displacement in Latin American history, driven by shortages of everything including food as well as the Maduro regime’s oppressive treatment of dissent[3].

Read more: Venezuela is fast becoming a 'mafia state': here's what you need to know[4]

No wonder, then, that Maduro, who has just begun his second term as president, is now under considerable domestic and international pressure to call new elections.

So how did things get so bad? How did inflation become hyperinflation in Venezuela? And how do Venezuelans deal with it? 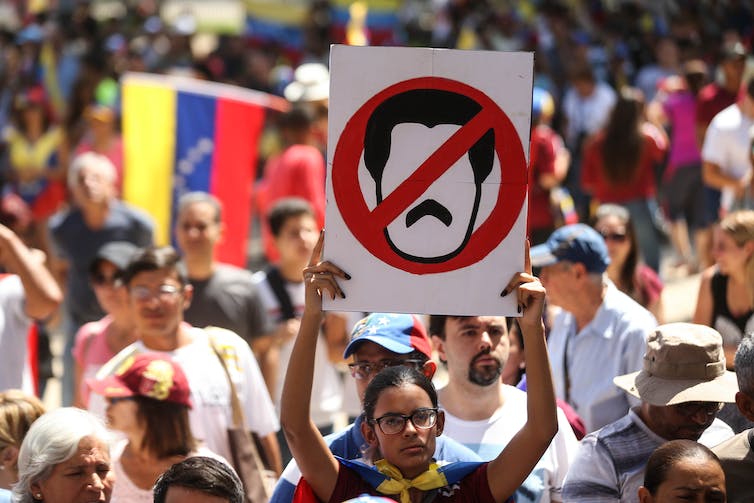 Venezuelans living in Santiago, Chile, protest against the regime of of Nicolás Maduro on February 2. A huge diaspora of Venezuelans is now spread throughout Latin America. Alberto Valdes/EPA

The cost of goods and the value of currency

What we pay for goods and services reflects not only their cost of production but also of the value of the currency we buy them in. If that currency loses value against the currency the goods are sold in, the price of those goods goes up.

By 2014 the value of Venezuela’s currency, the bolívar, and the prosperity of the Venezuelan economy, was highly dependent on oil exports. More than 90% of the country’s export earnings came from oil.

These export earnings had enabled the government headed by Hugo Chavez from 1999 to 2013 to pay for social programs intended to combat poverty and inequality. From subsidies for those on low incomes to health services, the government’s spending obligations were high.

Then the global price of oil dropped. Foreign demand for the bolívar to buy Venezuelan oil crashed. As the currency’s value fell, the cost of imported goods rose. The Venezuelan economy went into crisis.

The solution of Venezuela’s new president Nicolas Maduro, who succeeded Chavez in March 2013, was to print more money. 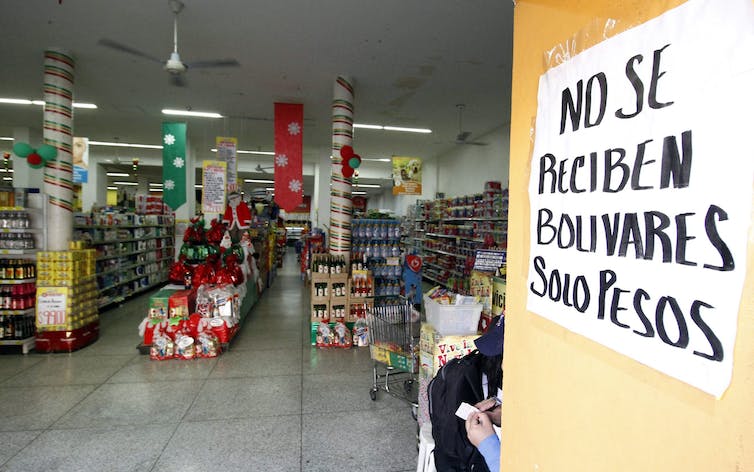 The sign in a store in Cucuta, the Colombian-Venezuelan border, reads: ‘We do not accept bolívares, only Pesos. Schenyder Mendoza/EPA

That might seem silly, but it can keep the economy moving while it gets over a hump caused by a short-term price shock.

The Venezuelan crisis, however, just got worse as the oil price continued to fall, compounded by other factors that reduced Venezuelan oil output. International investors began looking elsewhere, driving the value of the bolívar even lower.

In these conditions, printing more money simply made the problem worse. It added to the supply of currency, pushing the value down even further. As prices rose, the government printed more money to pay its bills. This cycle is what causes hyperinflation.

Circumstances like these quickly make saving money in the local currency nonsensical. To protect themselves, Venezuelans started to convert their savings into a more stable currency, like the US dollar. This lowered the value of the bolívar even further.

The government responded by issuing currency controls. It set a fixed exchange rate, to stop the official value of the bolívar dropping against the US dollar, and made it difficult to actually get permission to exchange bolívares into US dollars. The idea was to stabilise the currency by effectively shutting down all currency transactions.

US dollars were still available on the black market, however. This meant going to any number of operators on the streets of downtown Caracas or asking some friend or to hook you up. As the crisis deepened, more and more Venezuelans looked to switch their bolívares into US dollars. 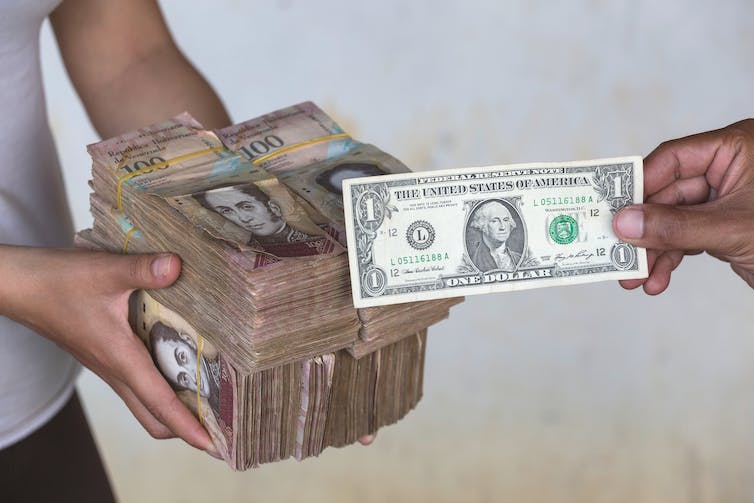 By mid-2018 the official foreign exchange rate was about 250,000 bolívares to one US dollar. shutterstock

This increasing demand meant the black market price for greenbacks rose, creating a difference between the official exchange rate (set by the government) and the unofficial going rate.

With this came new opportunities. In 2014 reports emerged that groups of middle-aged women were crossing the border to use ATMs in Colombia. They could withdraw funds from their Venezuelan accounts as US dollars at the official rate. They could then cross back into Venezuela and exchange the dollars for bolívares at the unofficial rate, making a tidy profit. Government officials able to exchange bolívares for US dollars within Venezuela had their own version of this practice.

This pushed the price of US dollars up, and that of bolívars down, even more. As the crisis deepened increasing numbers of ordinary Venezuelans began to engage in the unofficial currency market.

Sometimes this took the form of taking subsidised Venezuelan goods like food across the border to sell. This earned the sellers foreign currency, but it also exacerbated shortages of goods within the country, driving prices up even further.

This does not mean Venezuela’s currency crisis is the fault of ordinary Venezuelans. Illegal economic activity is largely a coping mechanism, a bellwether of the actual economy’s ability to provide for people. When a government fails its responsibilities, it should be no surprise that people protect themselves through unofficial currency trading. This is exactly what big international investors do all the time, albeit through more official channels. 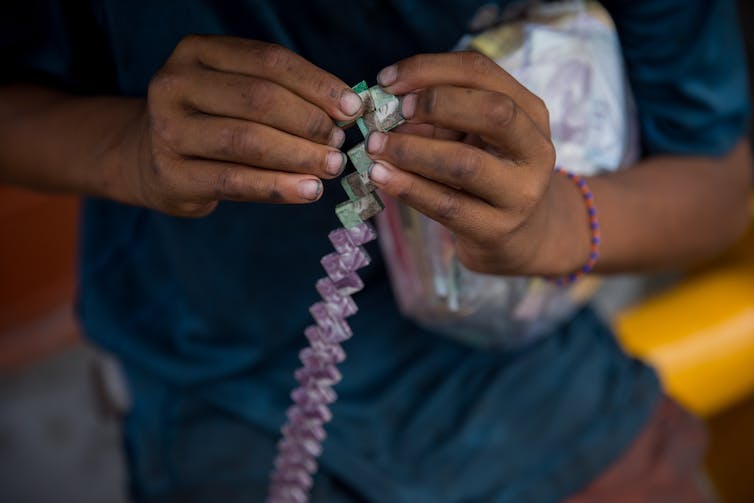 A street kid uses now worthless currency to make handicrafts to sell in the streets of Caracas, Venezuela’s capital. The currency was changed from the ‘Bolívares Fuertes’ to the ‘Bolívares Soberanos’ in August 2018. Miguel Gutierrez/EPA

By August 2018 the Venezuelan currency was worth so little that it was more prudent to use cash for toilet paper[6] rather than buy toilet paper.

The government tried to get on top of this situation by issuing a currency devaluation. Maduro devalued the bolívar by 95%, the largest currency devaluation in contemporary world history. He also tied the new currency to the price of oil, an economic experiment designed to show the Venezuelan economy had solid foundations.

By bringing the bolívar’s value into line with the reality of what people actually thought it was worth, and showing it was backed by something valuable, oil, Maduro’s government hoped Venezuelans would believe in their own currency and not exchange it for dollars. This would help stabilise the economy overall.

But within weeks of the devaluation it was clear ordinary Venezuelans had not been convinced.

They had no reason to be, given the government was not addressing other issues, such as policies contributing to low productivity across the economy. The government’s increasing authoritarianism, including interfering with the constitution and elections, also signalled it was not to be trusted.

Read more: Is authoritarianism bad for the economy? Ask Venezuela – or Hungary or Turkey[7]

Hyperinflation is a very difficult hole out of which to climb. Very few economies ever experience it, and it’s hard to stop it without massively cutting government spending.

It is easy, then, to see why millions of Venezuelans responded by dealing in the black market or taking their savings, and themselves, out the country altogether.

As the political crisis in the country deepens, Venezuelans will have to continue to seek ways to allow them to survive the storm any way they can.