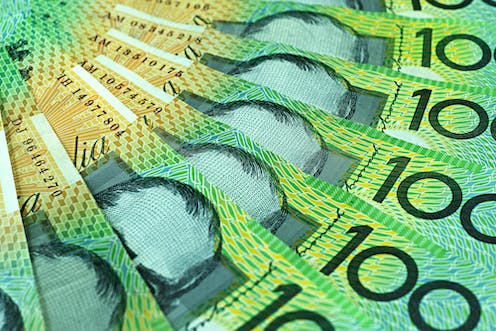 Treasurer Josh Frydenberg says he hadn’t “made any final decision[1]” on the A$7.8 billion per year low and middle income tax offset[2] ahead of next month’s budget.

He also says it was never intended to be “a permanent feature of the tax system[3]”, which is true enough.

The low and middle income tax offset (LMITO[5]) was introduced by Scott Morrison in his final budget as treasurer before becoming prime minister in 2018.

Its peculiar design owes much to the government’s experience with Robodebt[6], and its ill-fated attempt to collect what it believed were overpaid Centrelink benefits.

Morrison was by then acutely aware of the anguish caused by Robodebt, officially called the online compliance intervention program – which many people forget he introduced in 2016 to ensure “welfare recipients accurately disclose assets and investments[7]”.

Robodebt sent what looked like demands for repayment to Australians who often owed nothing, and ended up costing the government A$1.8 billion[8] in settlements.

LMITO was born of a desire to flatten Australia’s income tax scale and avoid the mistakes of Robodebt.

Read more: The Low and Middle Income Tax Offset has been extended yet again. It delivers help neither when nor where it's needed[9]

Part one of a three-part plan

So Morrison did it in stages[14]. The first would provide “tax relief for middle and low income earners now[15]”. It would be limited to taxpayers earning up to $125,333.

But the problem with directing a benefit to what Morrison called “low and middle earners” was ensuring it went only to them.

The offset was designed to avoid debt letters.

They’d have to be sent letters asking them to pay the money back, as with Robodebt.

So Morrison and the treasury decided recipients wouldn’t get the money until they had put in their tax returns, documenting what they made.

The offset would begin in July 2018, but the money wouldn’t hit the recipients’ bank accounts for more than a year, until the second half of 2019 – after their tax had been sorted.

Despite being called the low and middle income tax offset[16], very low earners would get nothing.

Those on less than $18,200 had no tax to refund. The rest would get up to $530 (later lifted to $1,080) – but only after they had done their tax. And the messy arrangement was only to last for a few years, until the second stage came in.

‘Not permanent’, but hard to stop

In 2020, as part of the government’s COVID response, Treasurer Josh Frydenberg brought forward stage two[17]. At that point, the offset was no longer needed.

But, perhaps in order to claim “the greatest benefits will flow to those on lower incomes”, Frydenberg extended[18] the offset for another year.

In 2021 he extended it for yet another year, this time as a “stimulus measure[19]”, albeit an ineffective one. A stimulus measure that doesn’t hit bank accounts for more than a year is anything but immediate.

Read more: What just happened to our tax? Here's an explanation you'll understand[20]

Frydenberg’s problem is that now he has given us both the offset and the stage two together, and done it for two years, actually ending the offset will quite rightly be seen as a tax increase or a “pay cut[21]”, directed at low and middle earners. The timing is particularly tricky, with a federal election due weeks after this year’s budget.

Costing the best part of $8 billion per year, delivered when it is not needed, and destined to continue until someone can find a way to stop it, the offset is an awfully constructed annual bonus for all but the highest-earning Australians.

Like the instant asset write off for business[22], which keeps getting extended because otherwise businesses would complain, there’s a chance the LMITO will stay with us forever.

As ill-fitting as it is, there is an unexpected benefit. The Tax Office says we’ve been getting our returns in early[23].