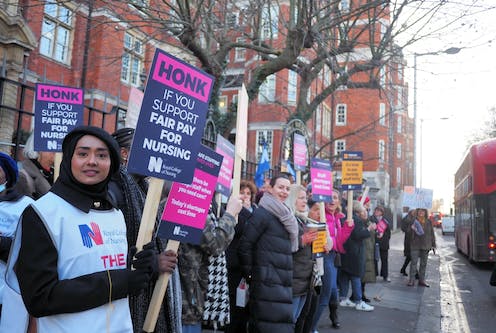 The UK government has not yet resolved[1] the thorny issue of ongoing public sector pay disputes, despite the fact that these workers are suffering much more[2] from the cost of living crisis than their private sector counterparts. The government is worried about wage increases[3] pushing up inflation that is already sky-high[4], but recent data shows that giving these workers more pay is unlikely to have that effect.

In the year to October 2022, private sector pay increased by 6.8% compared with[5] only a 2.9% increase for the public sector. This disparity has lead to widespread industrial action in the UK[6] in recent months. On a longer-term basis, a growing pay gap is contributing to acute labour shortages, which is seriously affecting the delivery of public services such as healthcare[7] and education[8].

Voters largely support public sector workers’ current industrial disputes. When a recent poll asked the public[9] who they thought was responsible for the nurses’ strike, nearly half (49%) of respondents blamed the government and only 20% blamed the trade unions. Another poll showed 55% of the public support teachers’ current pay dispute – up from 33% recorded in a similar poll[10] ten years ago. Voters seem to see years of falling real wages for public sector workers as a problem, even if the government is not acting to raise them.

So why is the government refusing to offer a better pay deal to these workers? It argues that it is merely following the advice of the various pay review bodies[11] which make recommendations on pay in the public sector. However, these bodies are not independent of government. For example, when the government imposed a pay freeze for workers earning more than £21,000 a year in 2011 and 2012, these bodies followed this lead by making no recommendations[12] on pay for staff on higher salaries.

Since industrial action first started to gather speed last year, concerns have been raised[13] about a wage-price spiral[14] causing entrenched inflation. This happens when rising prices prompt increased pay settlements, which in turn produce further price rises, wage increases, and so on. It happened in the UK in the 1970s[15] when, similar to now, the rate of unemployment was very low.

Indeed, the unemployment rate is key to this discussion. In the 1950s, a New Zealand economist called A.W. Phillips published research[16] showing an inverse relationship between wage inflation and unemployment in the UK that had existed for nearly a century, from 1861 to 1957. During this period when unemployment was low, wage inflation was high, and vice versa. Since then the Phillips curve[17], as it has become known, has been widely used to measure price inflation.

If this relationship still holds, it would mean that the current low unemployment level of 3.7% could trigger a wage-price spiral, particularly if public sector pay is increased. So it could be argued that the government’s refusal to raise public sector pay is a strategy to control inflation[18].

But the problem with this idea is that the Phillips curve no longer works in Britain, as the chart below shows.

Author's chart using Office for National Statistics (ONS) data, Author provided[19] Using monthly data over the period from 2001 to 2022, this chart shows the relationship between inflation, as measured by changes in the consumer price index[20], and the unemployment rate. Below an unemployment rate of about 4%, there appears to be a steep negative relationship between joblessness and inflation, in line with the original Phillips analysis. Read more: An economist explains: What you need to know about inflation[21] But although this is happening right now – inflation is very high – it is the product of supply-side influences, not wage inflation. The UK (alongside many other countries) has been plagued by supply-side inflation[22] in recent years due to the effects of Brexit, the pandemic and the war in the Ukraine on the supply of goods and services. Recent increases in energy costs in particular have really boosted inflation over the past year. At levels of between about 4% and 7% unemployment in the above chart, there is essentially no relationship between inflation and unemployment. The latter is expected to rise in 2023 as recession conditions set in[23], which means that raising wages in this situation will not affect inflation. When unemployment exceeds 7%, inflation appears to increase alongside it, producing what is often described as “stagflation”. This occurs when prices and joblessness increase together – a difficult combination for any economy to recover from, since it produces low growth. Read more: 1970s-style stagflation now playing on central bankers' minds[24] This indicates that reasonable pay settlements in the public sector to compensate for falling real wages over the years could easily solve the present impasse without triggering a wage-price spiral. UK inflation outlook This finding is reinforced by the widespread expectation that inflation has now peaked and will start to fall over the next few months. Indeed, the OECD is currently forecasting that inflation will fall quite rapidly[25] across the world.