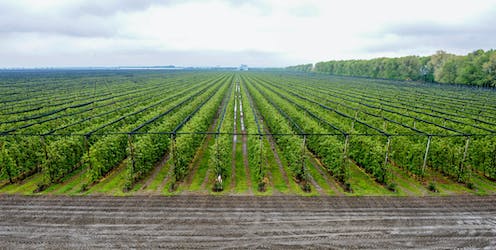 Rumours have circulated for months that the National Party and National Farmers Federation are pushing for a new so-called agricultural visa for temporary migrants. Now they have gained momentum[1], and reports indicate an announcement early next week.

Details are scarce, but it seems the visa will differ from the two existing visas for agricultural workers from the Pacific – the Seasonal Worker Program (SWP) and the Pacific Labour Scheme (PLS) – in being more flexible and also open to workers from across Asia[2].

The SWP allows workers to come to Australia from the Pacific or Timor Leste for up to six months to pick fruit and vegetables. It is growing rapidly: by almost 40% per year.

The newer PLS allows Pacific Island workers to come to regional Australia to work in any sector for up to three years. Only a year old, it too could grow rapidly.

Here are the three reasons why an additional extra agricultural visa is not just a bad idea, but one that makes no sense.

First, we don’t need one. Farmers can already hire SWP workers to meet their short-term needs (up to six months) and PLS workers for their long-term needs (up to three years). If there are problems with these schemes, the best approach would be to fix them.

Second, a new agricultural visa would reduce our leverage in the Pacific relative to China’s.

The one thing we can offer Pacific nations that China can’t is labour mobility. More than 10% of Tongans aged 20–45 travel to Australia or New Zealand each year for seasonal work.

If they were partly or largely replaced by workers from countries such as Indonesia and Vietnam, it would greatly antagonize our Pacific island neighbours, shred our credibility in the Pacific, and it would drive Pacific countries towards China.

Third, the new class of visa is being touted about as more flexible.

There’s a risk that might mean fewer safeguards, and easier worker exploitation. The SWP is a well regulated, and has far fewer compliance problems than the unregulated backpacker scheme.

In practice, it probably won’t have a weaker set of standards to the two existing Pacific schemes, because to do so would be to treat workers from different countries differently, meaning the flexibility promised won’t be delivered.

If the National Party was serious about improving the access of Australian farmers to workers from overseas, it would be demanding reforms to the existing SWP and PLS. Those reforms could make the conditions more employer-friendly or add more countries to the list.

Those proposals could be publicly debated.

Creating a new extra agricultural visa makes no sense. It would not help farmers, and, from a strategic perspective would be a serious own goal.