When I was growing up in Adelaide in the 1970s I wanted to be like Bob Hawke.

Other kids generally wanted to be cricket, football or rock stars. I wanted to be a research officer with the Australian Council of Trade Unions. That’s what Hawke had been in the 1950s and 1960s, working on national wage cases advocating for Australian workers.

When I was 15, during school holidays, I took the train to Melbourne and went to the headquarters of the ACTU. I walked in and asked for a job. A very polite official, John Lloyd, told me I would first need to get a trade and work for a union or get a university degree. He advised me to study economics, rather than law, as it would be more valuable to the ACTU’s research department. 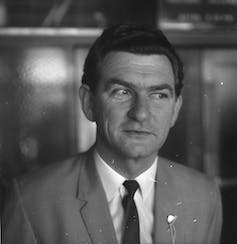 Bob Hawke soon after being elected president of the ACTU in 1969.

I took that advice. A few years later, the week after Bob Hawke won the 1983 election, I started an economics degree at Adelaide University.

The Hawke government ushered in an exciting time for economists. Two of my economics lecturers, Barry Hughes and Owen Covick, were also advisers to the Hawke government: Hughes to the treasurer, Paul Keating; Covick to a number of cabinet ministers, notably the acidic but highly principled finance minister, Peter Walsh.

As prime minister and treasurer, Hawke and Keating were a dynamic duo of creative economic leadership. They reformed all aspects of Australia’s struggling economy from the financial system to the labour market. As a 17-year-old undergraduate, I was fascinated by how brave and exciting they were. Was there ever a better time to study economics in Australian history?

Read more: Hawke was our larrikin, but also our reformer[1]

The Hawke government’s centrepiece was the Prices and Incomes Accord, a ground-breaking pact between it and the ACTU to allow the economy to grow without pushing up wages and prices.

To promote employment and recovery from the recession of 1982-83, the union movement, now led by Hawke’s one-time protégé Bill Kelty, agreed to curb demands for higher wages and other benefits from employers.

In return, the government introduced the “social wage” including Medicare, superannuation, education and training reforms and labour-market adjustment programs.

The industrial peace wrought by the accord was in stark contrast to the previous Labor government, led by Gough Whitlam in the early 1970s, when Hawke was head of the ACTU. Those years of widespread industrial conflict, along with high inflation, severely damaged Whitlam’s ability to carry out his agenda and his reputation for economic management.

In fact, Whitlam once quipped to me in an interview: “Bob Hawke’s greatest advantage as prime minister was that he didn’t have to deal with Bob Hawke as ACTU president.” 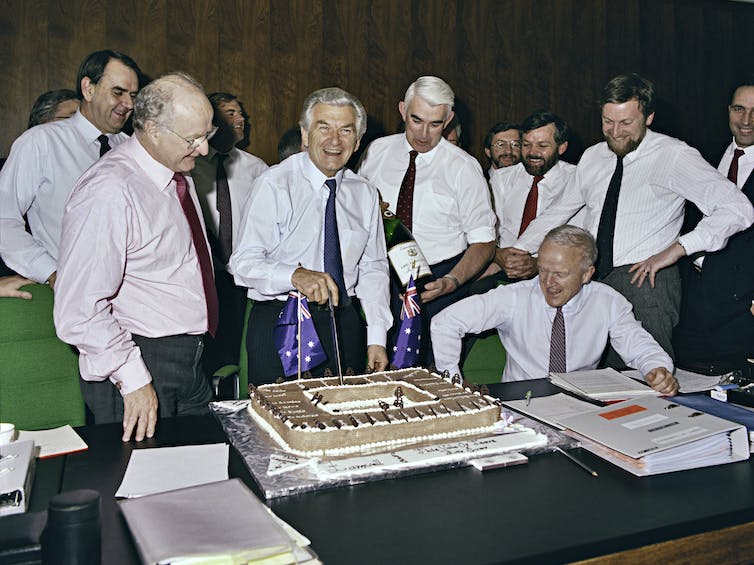 A hug and a slap on the back

After graduating from university, and experience with the Reserve Bank, the Arbitration Commission and stints abroad in Israel and the United State, I fulfilled my dream of becoming an ACTU research officer in 1991.

In my first week I met Hawke at the Collingwood Town Hall. I told him I had just started the same job as he had all those years ago. He gave me a big hug and slap on the back.

But just as I started my career with the ACTU, his prime ministership was coming to an end.

That wasn’t an easy year for him. There was a recession, and Keating resigned as treasurer (and deputy prime minister) to challenge him for the party leadership.

It was a drawn-out challenge. As the pair lobbied for support from unions, at the ACTU we’d see Hawke in the building one week, and Keating the next.

“Gee Mom, Australia is not such a big country,” my wife told her mother in the US. “I see Bob Hawke and Paul Keating in the elevator at Tim’s work almost every week.”

Luckily, Bill Kelty gave me responsibility for these areas at the ACTU and Keating really championed those both when he became prime minister in December 1991. And I had other pieces of luck that involved Hawke’s golden touch.

In 1995 I was sent to Sydney to work for Hawke when Kelty brought him back as the ACTU’s advocate in the dispute with mining company CRA[2] (now Rio Tinto) over its attempt to destroy collective bargaining through individual contracts.

When I wrote a report for the International Labour Organisation on labour standards and the Asia Pacific Economic Cooperation forum, Hawke (who had initiated APEC with the South Korea leadership) agreed to write the foreword. 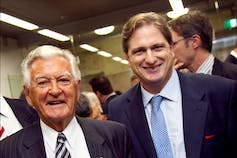 I kept in touch with him on APEC and other international trade issues when I moved to Sydney to work for Austrade. He helped me a great deal on my books, articles and speeches in my new job.

So while Hawke may have inspired me to join the ACTU, he had a bigger role in shaping my post-ACTU career in international trade and relations with Asia.

In all this time, one thing that struck me about him was he was non-ideological and never dogmatic. He was always pragmatic and practical. Economics to him wasn’t an end in itself to test an elegant theory. It had to have a practical outcome with a social benefit.

In taking this approach, he improved the life chances of many Australians.