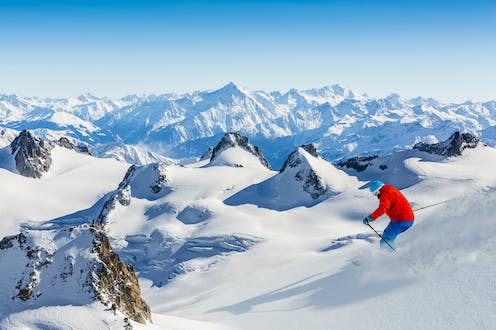 Before COVID, the winter sports tourism industry was worth over €70 billion (£58.2 billion) a year globally[1], with ski resorts expanding across the world[2]. The pandemic then led to a stark decrease[3] in visitor numbers, with a major impact on revenues[4] and livelihoods.

Resorts in France were dealt a further blow in mid-December 2021 when all non-essential travel from the UK was banned[5] in the wake of the surging omicron variant.

Some have suggested[6] that the restrictions were implemented as a political move connected to recent disputes between the UK and France over fishing[7] and migration[8]. But, whatever the reason, the restrictions (now lifted) have significantly damaged French ski resorts desperate for some respite.

In early January 2022, I spoke to workers in the Portes du Soleil region, as part of an ongoing project exploring the impact of COVID on tourism. As one of the two biggest ski regions in the world (alongside Les Trois Vallées), Portes du Soleil covers 13 resorts between Mont Blanc in France and Lake Geneva in Switzerland.

A business owner in the French resort of Avoriaz described altering restrictions for a second consecutive season “as highly damaging” – even more so than the previous year’s closures. A chalet host claimed that the recent travel ban made the country look “pompous”, and had done serious economic harm.

Many of the people I spoke to said a key issue in resorts near the border with Switzerland was the difference in travel restrictions between the neighbouring countries. In November 2020, France closed the lifts[9] in all 250 of its ski areas for the season, while the majority in Switzerland remained open[10]. And although the French government paid compensation[11] to hoteliers, ski operators, restaurants and retailers, the impact of the closure was catastrophic[12].

One restaurant manager from the resort of Chatel (France) told me:

Some of our neighbours ten minutes away in the resort of Morgins (Switzerland) made over 55% of their pre-COVID income [last winter]. We made absolutely nothing last season. Now they introduce these restrictions during one of the busiest times of the season. How can we ever recover when they keep changing the rules?

An estate agent in the resort of Morzine explained how many chalet businesses had been struggling to attract both visitors and workers. She said “more than a third” of the resort’s chalets are expected to be empty for the whole of the current season. She added: “I don’t understand how the authorities expect businesses to survive.”

A chalet manager in the neighbouring resort of Les Gets also described how rival companies in the region had decided to sell their chalets or cease to be “snow rentals” due to the uncertainty that businesses believe will continue to dominate next winter.

Indeed, many residents, resort staff and business owners are worried about an annual trend of new COVID variants. They believe this could lead to a repeat of the issues this season, in which individual countries set different rules and restrictions on travel.

As one owner explained:

These rules for different countries and new annual variants will ruin the winter sport industry. The ministers in each country clearly don’t communicate with each other – so they don’t understand what we are going through.

French ski resorts, many of which rely heavily on British tourists[13], lost over 50% of their visitors in the winter of 2020-21[14]. Meanwhile, over the same period, domestic tourism in Swiss ski resorts increased by nearly 30%[15] and restaurants were able to continue with outdoor dining.

Nicolas Rubin, the mayor of Chatel[16], was so exasperated by blanket restrictions for French resorts that he displayed Swiss flags outside of the town hall for a week in protest in November 2020.

On January 14 2022, France’s reopening of their borders to UK visitors led to a dramatic surge[17] in bookings. This could salvage some of the current season, but the damage already done should not be ignored.

The people I spoke with made it clear that many in the winter-sports industry are seriously concerned about the continuing effects of COVID and the lack of agreement between different countries over entry restrictions. Livelihoods are at stake as resorts try to predict what the future holds for tourist numbers in the years ahead. As one barman commented to me: “There will be [some] who are never going to return.”