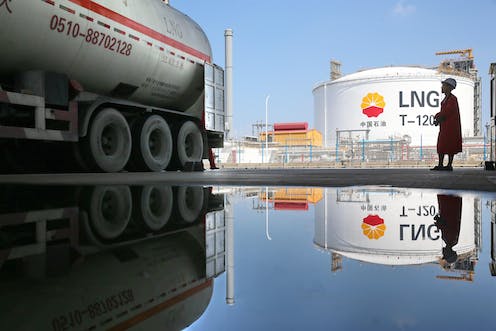 With today’s high oil prices and record gas prices, it is easy to forget that the situation was reversed as recently as two years ago. At the end of 2019, an over-supply of fossil fuels had left producers concerned about low prices. Saudi Arabia and Russia fell out[1] over the need for further production cuts to support prices. Then the scale and impact of the pandemic became apparent, economies locked down, and energy demand plummeted – most significantly for oil, given its links to transport.

The average price[2] for a barrel of Brent crude oil duly fell from US$64 (£47) in 2019 to US$42 in 2020. It has since rallied to an average of US$71 in 2021[3]. This strengthening reflects the success of oil-producer cartel Opec+ in managing production against rebounding global demand, helped also by only modest rates of recovery in supplies from the US shale industry.

The same cannot be said of the gas market, where prices vary significantly by region. North America is self-sufficient and has been enjoying relatively low prices, but consumers in Europe and Asia have to compete for marginal supplies on the global market.

Using the UK’s spot price[4] as a European benchmark, gas was trading at around £0.35 to £0.40 per therm in early 2020, but by May 2020 it had fallen to £0.084. In the thick of the pandemic, liquefied natural gas (LNG) cargoes in the US were being cancelled due to a lack of demand and Gazprom in Russia was having to scale back production from its fields in Siberia.

Trading Economics[5] But in early 2021, a cold snap in Asia warned of what was to come as demand for gas started rising. A global gas-price crisis unfolded, with European consumers having to out-compete Asian buyers to attract LNG deliveries. UK spot prices reached a record £4.50 per therm just before Christmas, representing a ninefold increase on 12 months previously. Prices have since fallen back as LNG deliveries have been diverted from Asia. But storage remains low, and a prolonged cold snap in Europe and/or Asia could see prices skyrocketing again (and indeed they have been on the increase[6] in early January). Against this backdrop, politicians on both sides of the Atlantic have called for increased oil and gas production as a way of lowering prices. In the UK there have been calls to reduce taxation[7] on gas and electricity; remove the green levies[8] from bills that subsidise renewable energy; support new exploration[9] in the North Sea; and even try[10] and resuscitate shale gas development. Fossil fuel producers have used this crisis to warn against a messy energy transition and a rapid move away from fossil fuels[11]. For environmentalists, on the other hand, the crisis highlights the need to accelerate the move away from expensive and volatile fossil fuels. There is truth in both positions. Challenges with the green transition The environmental consequences of fossil fuel consumption are ever more apparent. The IPCC (Intergovernmental Panel on Climate Change) physical science report[12] of 2021, described as code-red for humanity, made clear the severity of the situation. Analyses by academics[13], international organisations[14] and think-tanks[15] have made clear that we are planning to invest in future oil and gas production way beyond the constraints of the Paris Agreement[16] of 2015, which committed to keeping global warming to a maximum of 2℃. When the world’s politicians and climate change negotiators met in Glasgow at the COP26 climate conference in November, the scale of the challenge was acknowledged and commitments and pledges were made, but they still fall way short[17] of what is needed. Equally, greenhouse gas emissions are rebounding[18] and the opportunity to build back better through a green recovery[19] has been missed as most government financial support is towards maintaining the fossil-fuelled status quo. The good news is that the cost of clean energy[20] and low carbon technologies[21] continues to fall. At the same time, investments in fossil fuel production are declining[22] as the financial community has less appetite to invest. But here’s the rub: how do you ensure an adequate supply of fossil fuels to meet global demand in the short-term, while reducing production in the long-term? At present[23], far more green investment is required to ensure the future falling fossil fuel production is compensated for by improvements in energy efficiency and rapid growth in clean power generation. This lack of commitment helps to explain why demand for fossil fuels has driven prices back up. With governments apparently less willing to lock down in the face of the omicron variant, oil demand will likely continue to recover at least in the short term. At the same time, Opec+ is hesitant[24] to increase production significantly. Equally, the US shale industry is demonstrating financial discipline[25] and may never again reach 2019 production levels. Other risks such as the Russia-Ukraine situation[26] could further drive up prices if Russian oil were removed from the world market because of sanctions. Brent crude price (US$) 2012-22

Trading View[27] The gas situation is more unpredictable. Ordinarily, demand and prices fall when the winter heating period ends in the northern hemisphere. But storage will require re-filling because facilities in many countries were not full even before this winter. And growing global demand, as economies switch away[28] from coal to gas, may stretch supply. In Europe, the challenge is to ensure adequate supply in the short-term as climate policy drives down demand in the long term. Relations with Russia, which exports gas to Europe via several pipelines, will remain critical to avoid expensive competition with Asia for LNG supply. Aside from this possibility of Europe contributing to higher demand, it is higher LNG demand in emerging markets that will promote an expansion of natural gas production in the medium to long term. One potential issue is that higher gas prices may dissuade potential new importers like Vietnam[29] from investing in import infrastructure, potentially lowering global demand. The production problem Yet in general, few significant oil and gas producing economies are going to stop investing in new production anytime soon. The problem is the credibility gap that exists between ambition and action in importing economies. The producers simply do not believe that demand is going to disappear, that prices are going to fall permanently, or that their assets are going to get stranded. It is true that financial markets are doing their bit[30] to curb extra fossil fuel production by turning away from financing the sector, but the net result may simply be to hand market share to national oil companies. The real answer lies in fossil-fuel-importing nations – the largest of which are China and India – demonstrating credible plans to decarbonise their economies and delivering on them. At present, they are doing just the opposite. The current energy crisis will eventually pass as more supply comes on the market. For now, governments in those countries impacted by high prices must hold their nerve and press on with decarbonisation. At the same time, fossil fuel producers should not be fooled into thinking that the good times are here to stay. What the current crisis does highlight is that the challenge of phasing down fossil fuels in an affordable and equitable manner is just as great as that of building up clean energy capacity. References^ fell out (www.worldoil.com)^ average price (www.statista.com)^ US$71 in 2021 (www.eia.gov)^ UK’s spot price (tradingeconomics.com)^ Trading Economics (tradingeconomics.com)^ on the increase (www.theguardian.com)^ reduce taxation (www.thetimes.co.uk)^ green levies (www.dailymail.co.uk)^ support new exploration (leftfootforward.org)^ even try (www.yorkshirepost.co.uk)^ fossil fuels (www.ft.com)^ physical science report (www.ipcc.ch)^ academics (www.nature.com)^ international organisations (www.unep.org)^ think-tanks (carbontracker.org)^ Paris Agreement (unfccc.int)^ fall way short (climateactiontracker.org)^ are rebounding (www.bbc.co.uk)^ green recovery (www.unep.org)^ clean energy (www.irena.org)^ low carbon technologies (www.theguardian.com)^ are declining (www.wsj.com)^ At present (www.iea.org)^ hesitant (www.ft.com)^ demonstrating financial discipline (www.bloomberg.com)^ Russia-Ukraine situation (www.theguardian.com)^ Trading View (www.tradingview.com)^ switch away (www.reuters.com)^ Vietnam (www.spglobal.com)^ doing their bit (www.cnbc.com)