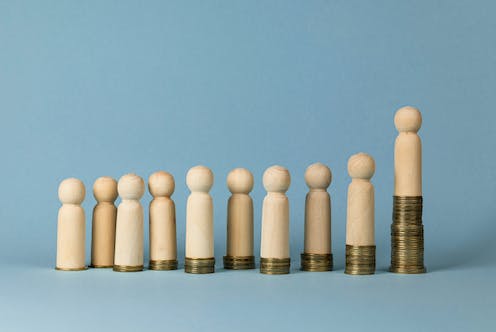 Ever since it started, the pandemic has exacerbated the inequality[1] that already existed between households in the UK. Those with secure incomes, savings and assets have been able to deal with the financial shocks of COVID, while millions of others have not.

A recent survey[2] of 5,770 people suggests that this inequality could widen even further. For most of the 4.7 million households whose financial situation has already deteriorated a lot according to the data, the outlook for 2022 is expected to get worse.

It’s a vicious cycle. For many, COVID caused a prolonged and deep financial shock brought about by a loss of earnings. This meant they drew heavily on savings (if they had any) and increased the amount they owed on credit cards, overdrafts and loans.

This was often accompanied by a considerable and enforced negative change in spending patterns. In some cases, spending fell because people had to cut back to make ends meet, while in others spending went up to due to rises[3] in the cost of essentials such as food and fuel.

In contrast, there were 1.7 million households whose financial situation has improved a lot since the start of the pandemic. They experienced a “virtuous circle” in which 57% saw their savings increase due to factors such as home working and severely curtailed social activities (and therefore spending).

This also led to 17% owing considerably less than they did before. Only 4% of them saw their spending change for negative reasons.

Among those whose financial situation has already deteriorated substantially, the outlook was estimated to be “poor” or “quite poor” for 72% of them (3.4 million households). The outlook was similarly bleak for single-parent households (65%), those with a disabled inhabitant (66%) and households receiving Universal Credit (83%).

A separate review[4] of around 240 publications about the pandemic’s financial impact paints a similar picture of a divided population. The overall story from these research papers by academics, thinktanks, charities and others was remarkably consistent across the worst affected groups: people with disabilities, members of some minority ethnic groups, single parents, people in insecure work and renters.

It was a story of disadvantage in the labour market, of reduced incomes and low financial resilience, of increased expenditure and financial burdens, and of unequal and often insufficient state support. By October 2020, for example, a growing disability pay gap[5] meant that disabled people working full-time were earning £3,800 less per year, on average, than their non-disabled counterparts. That’s an increase on the previous year of £800.

So despite comparatively positive forecasts elsewhere[6] about economic growth and employment, at a household level the evidence paints a picture of increased poverty and inequality over the longer term. By 2025, an estimated 23% of people[7] in the UK (roughly 15 million) will be living in relative poverty, up from 21.1% in 2021.

Echoing the UK government’s early response to the pandemic, the main target of recent interventions such as an increase in the national living wage[9] has been low-income working households rather than those which are not in work. Proposals for additional support also do not offset previous deep cuts[10] to social security and local government funding over the last decade.

In response, there have been calls for immediate action to tackle rising energy bills[11] and [increase Universal Credit payments]. Others argue for improvements in the availability and affordability of childcare[12] as well as more secure and affordable housing[13]. It is also worth noting the apparent lack of recognition by the government of the links between financial difficulty and wellbeing, despite strong evidence[14] of a link between poverty and poor mental health.

Since our survey data was collected in October 2021, the economic outlook has been further hit by rising inflation[15] (which reached 5.1% the following month). The cost of fuel, gas and electricity are all expected to go up in 2022, which particularly affects lower-income households who spend a greater proportion[16] of their income on essentials. At the start of 2022 then, it seems that those who have already suffered the greatest economic hardship will continue to bear the financial brunt of the pandemic.