Prince Mohammad Bin Fahd University (PMU) has fully embraced the power of invention. For starters, the university has established a Patent Center under the Deanship of Research. The Patent Center supports the protection of creative scholarly activities, innovation, and discoveries involving faculty, staff, students, and others participating in PMU programs.

Following through on this mission, the Patent Center recently announced the opening of the first Local Chapter of the National Academy of Inventors (NAI) in the Middle East. A United States-based non-profit organization, NAI has over 4000 individual inventor members affiliated with more than 250 institutions around the world, including 30 institutions and universities outside of the United States. NAI broadly helps in recognizing and promulgating the inventions made by its members for the benefit of global society.

As a sign of the inventive spirit at PMU, the university also recently announced that its members have more than doubled their number of patents registered by the United States Patent and Trademark Office (USPTO) to 23. This number represents a tremendous increase of 15 additional patents since just 2020. The patents cover a rich range of scientific fields including energy and artificial intelligence, as well as electrical, civil, and mechanical engineering.

"At PMU, we are taking important measures to ensure we increase our patent productivity and increase the worldwide impact of the inventions created by our university researchers," said Dr. Issa Al Ansari, President of PMU. "As we say at PMU, 'creative minds transform the world'."

The Local Chapter will work closely with PMU's Patent Center, which has become a hub on campus for innovators, a crucial resource for preparing a patent application and, as a prime task, supporting the protection of creative scholarly activities, innovation, and discovery at PMU.

Further representing the scope of research at PMU, university members currently have more than 400 academic journal papers catalogued in Scopus, including two papers in the prestigious Nature journals.

"The Patent Center is here to help not only the PMU community, but the community of inventors nationally in Saudi Arabia and the world, along with all the nations of the world in advancing together through the power of invention," said Dr. Al Ansari. 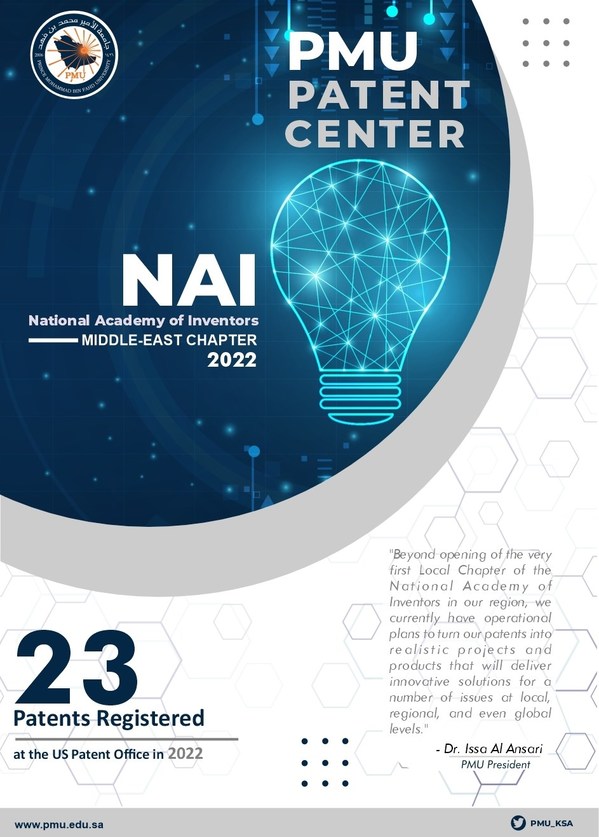