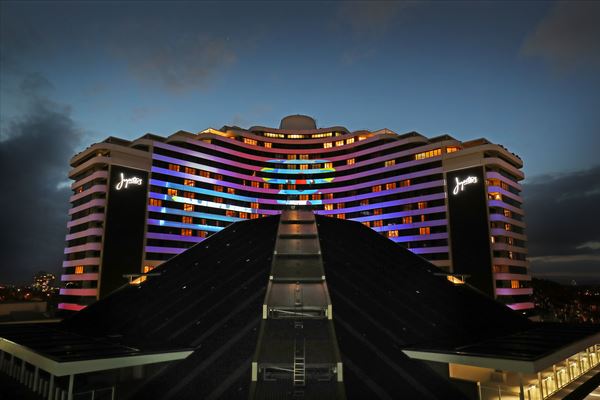 Jupiters Gold Coast has once again shown its commitment to innovation and internationally-competitive urban design with the unveiling of an impressive new lighting system to illuminate the property's facade.

Seventeen projectors mounted on specially designed platforms will beam spectacular moving imagery onto the facade each evening, in a stunning example of 21st century artistic expression.

The visual design is a dynamic display of artistry which utilises light and shade, as well as rhythm and elegance, to represent the natural environment and vibrant Gold Coast lifestyle.

It was an electrifying glimpse of what's to come as the City celebrated 500 days to go to the world-class event, of which The Star Entertainment Group was named as the first official partner.

The Star Entertainment Group's Managing Director Queensland Geoff Hogg said this latest project, which follows on from the porte-cochere permanent living art installation, will most certainly be a crowd pleaser.

“Jupiters is one of the Gold Coast's most famous landmarks, and an iconic piece of architecture,” Mr Hogg said.

“The synergies between our current transformation and partnership with the Gold Coast 2018 Commonwealth Games meant Borobi was the natural choice to debut the new projection system.

“We've had fantastic feedback on the porte-cochere palm tree lighting which we unveiled earlier this year and it's become quite a talking point.

“The latest installation marks a new era for the hotel and will ensure guests and visitors to the Gold Coast are given a truly unique and memorable visual experience.” Mr Hogg continued.

“Since his arrival in April, Borobi has been very much a larger than life character, but the lighting display takes his personality and boundless energy to new heights,” Mr Beattie said.

“The system is another spectacular innovation by Jupiters and one that literally shines a light on our wonderful city as we head ever-faster towards April 2018 and well beyond,” he said.

The collaborative project was completed by world-renowned lighting specialists Ramus Illumination, who are famous for their unique approach to creating works that are truly innovative, interactive and sustainable.

Artist and Creative Director Bruce Ramus, who has been responsible for lighting up national icons such as the Sydney Opera House, said they were extremely proud of the Jupiters project and its inspiration – the Gold Coast.

“The new projection offers a life and movement to an otherwise static facade, reflecting the rhythm of the City and showcasing the best of the Gold Coast,” said Mr Ramus.

“We are honoured to be involved in such a monumental project and can't wait to see the reaction once the illumination begins,” he continued.

The facade lighting has been designed to ensure there is no impact on the comfort of guests or the local area and will use the existing facade as a canvas. A digital mask ensures light does not project onto hotel windows and the projection is tailored to the edges of the building so no light spills into the night sky.

The environmentally sustainable project will also make use of a new streamlined control system to assist in lowering power consumption and significantly reduce operating costs and carbon emissions. The average lifespan of the projectors is expected to last more than a decade, while each projector bulb will have a lifespan of over 1000 hours.

The property's facade lighting is yet another milestone in Jupiters' $345 million transformation which is on track to be completed prior to the Gold Coast 2018 Commonwealth Games.

Work is well underway with almost 600 existing hotel rooms scheduled for completion by the end of 2016, while the construction of the new six-star hotel tower continues at the front of the property.

As well as this, the iconic Atrium sail roof is also currently being replaced, two new food and beverage offerings will open this summer in the area formerly known as Spinners, and a new-look Atrium Bar is set to be revealed later this year.