Australia’s COVID recession hurt women more than men, and not only in job numbers.

With schools and childcare centres closed, many women who remained in paid work had no choice but to take on more unpaid work, effectively working double shifts.

Yet much of the government’s budget response involved high-viz vests and hard hats.

These gender differences would have been apparent to the government if it had run its policy ideas through a “gender lens” – a process that used to be[1] built into the government’s budget decision-making.

Promises of A$1.7 billion in childcare relief in Tuesday’s budget aim to lift women’s workforce involvement, but bigger steps beyond the perfunctory Women’s Economic Security Statement[2] are needed to bring a gender lens to policy design.

With aggregate female and male employment numbers recovering, men are showing stronger keenness to return to the office, while more women are likely to continue working from home[3]. 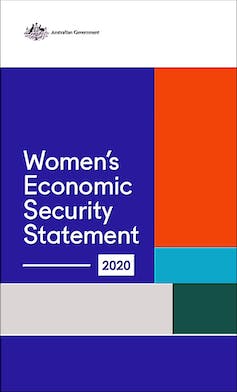 Women's Economic Security Statement 2020-21 Not a holistic analysis of government programs[4] This can bring benefits for the women who opt for this, but also risks re-entrenching women’s traditional role as caregivers and squeezing them out of the career opportunities that the research on unconscious bias[5] tells us tend to advantage those who are visible in the office. Analysing these dynamics through a gender lens is not about pitting women against men. It’s about appreciating the ways in which men and women tend to walk different life paths, navigate towards different industries and occupations and take different roles within households and society. It can show up the ways in which men experience greater hardship than women. Read more: Each budget used to have a gender impact statement. We need it back, especially now[6] During the crisis, the Melbourne Institute found that the group that suffered the largest surge in mental health distress was working fathers[7] with young children. A possible reason? Men are less accustomed to juggling work and home life. The risk of a toddler zoom-bombing[8] your video call and detonating your professional reputation, seems to provoke more anxiety among men than women. It’s an example of gender differences in workplace culture and expectations. 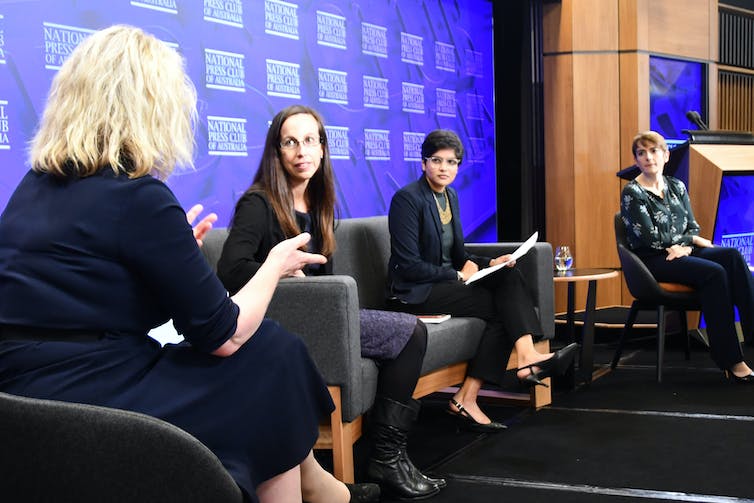 Leonora Risse, Gabriela D’Souza and Sarah Hunter discuss the budget with Laura Tingle at a Women in Economics forum on Tuesday. Lyn Mills/NPC[9] Most government policy decisions are presented as if they are gender-neutral. When he was treasurer, Scott Morrison[10] claimed that the tax system “doesn’t look at what your gender is any more than it looks at whether you’re left handed or right handed, or you barrack for the Sharks or you barrack for the Tigers”. As prime minister, when asked whether last year’s budget left women behind, Morrison pointed to the ways that women were just like men[11]. “Women run small businesses, women pay tax, women hire other Australians in their businesses,” he said. “Women want to drive on safe roads. Women want to go to university.” Programs are rarely gender-neutral But ignoring the ways men and women participate differently is precisely what can lead policies unintentionally advantaging one gender over the other. The tapering of family and other tax benefits when added to childcare costs means second earners can find it financially unviable to work more than three[12] days per week. 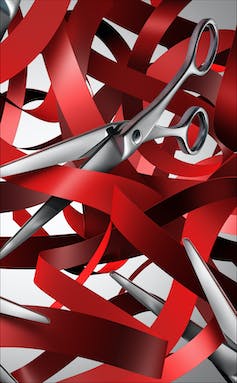 ‘Pink tape’ is red tape that holds back women. A gender lens would tell us that it is overwhelmingly women who find themselves in this situation, facing effective marginal tax rates of around 90% on these extra days’ earnings. It’s an example of “pink tape” that holds back female employment, in the same way that red tape holds back businesses. A gender lens would tell us that expanding the public provision of childcare and early learning, aged care, disability care, mental health services and community care would not only create more jobs in female-dominated sectors, but also free up unpaid carers – predominantly women – to contribute to the paid workforce. Boosting the careforce could pay for itself The measured size of Australia’s paid economy — gross domestic product — would be at least 1.6%[13] bigger in ten years’ time with such investment. Economic modelling commissioned by the National Foundation for Australian Women found that investment along these lines, including investment that lifted the wages of workers in caring industries, would largely pay for itself via the tax revenue that flowed back to the government’s budget. The barrier to accepting such ideas is that governments usually only examine recurrent costs and ignore the future recurrent benefits. 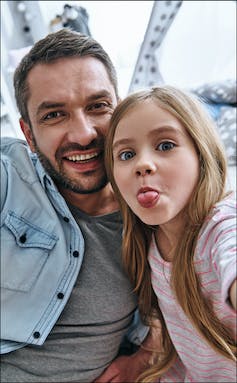 Stay-at-home dads battle stigma. Evgeny Atamanenko/Shutterstock Gender lensing can break down barriers against men. Our parental leave system is built around the idea that one parent takes most of the leave. Increasing paid parental leave for dads, and making it non-transferable on a “use it or lose it” basis, would legitimise men as carers. Is it better for men to be the breadwinners and for women to look after the home and children? When asked in the Melbourne Institute’s Household, Income and Labour Dynamics survey, only 20% of men and 16% of women thought it was. Efforts to economically empower women will have limited success in a society that is grappling with the concept of women being empowered. New research by Australian National University economists finds that when a woman’s earnings begin to exceed those of her male partner, the incidence of domestic violence and emotional abuse[14] rises. Read more: A shocking finding that will change the way you think about gender pay[15] Any policy aimed at improving women’s economic security and safety has to go hand-in-hand with policies that empower men[16] to embrace healthy masculinities and step beyond their traditional roles. There’s more to it than economics Many of our breakthroughs in equality have occurred during times of economic necessity. The Commonwealth bar on the employment of married women was removed at a time of labour shortages in teaching and nursing. Right now it’s easy to argue that boosting women’s involvement in the workforce will help fuel the economic recovery, but the case for gender equity shouldn’t need to depend on that. When so much depends on gender, applying a gender lens to policies is the responsible thing for governments to do. It’s worthya in its own right.