Shareholder primacy is often said to be the guiding principle of corporations.

The idea is that they exist to benefit their shareholders by providing dividends and capital gains, the more the better.

Fifty years ago, Nobel Prize winning economist Milton Friedman went as far as to argue that was the only[1] responsibility of companies — to make as much for their shareholders as the law would allow.

These days, most boards refrain from speaking about shareholder primacy and instead talk about the interests of the company, which includes things such as social license, stakeholder engagement and community expectations.

But what happens if shareholders try to tell boards and company managements how to go about their jobs?

Are the directors and chief executives required to follow their instructions?

From a legal perspective, company directors are required to act in the best interests of the company rather than (what might be the shorter-term) interests of shareholders.

If shareholders are not happy with the decisions of the company, they have the option of replacing the directors.

The directors, under the leadership of the board chair have the ability to remove and give instructions to the chief executive and senior managers.

Directors are accountable to shareholders indirectly, because shareholders have the ability to vote them off the board.

In large public companies, this threat is often difficult to carry out because big institutional investors usually support incumbent managements and lack the resources or the will to actively monitor all of the companies in their portfolio, at least while they seem to be doing well.

Even smaller shareholders (most of them) are passive investors.

But directors don’t have carte blanche. They are legally bound to act in the best interests of their company.

Read more: 'Not suitable': where to now for James Packer and Crown's other casinos?[2]

There is no parallel duty for them to act in the best interest of shareholders.

Decisions about how the company’s money should be spent and what it should pay its workers are solely decisions for company management, under the supervision and ultimately authority of the board of directors.

But what if the company is a government-owned enterprise? What if it has only one shareholder (the government) who has appointed the entire board?

Legally speaking, that makes no difference. The board still has the authority to refuse to do what the shareholder wants.

Governance in the boards of government-owned companies is inherently politicised because the government can appoint and remove directors whenever it wants, for whatever reasons it wants, rational or otherwise. 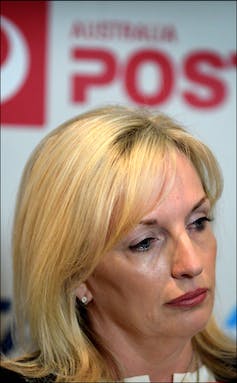 Instead of thanking her, late last year the head of the sole shareholder, Prime Minister Scott Morrison, labelled part of her conduct “disgraceful and not on[4]”.

She had used company money to buy expensive presents (watches[5]) for staff who secured contracts worth hundreds of millions of dollars.

“So appalled and shocked was I by that behaviour — any shareholder would in a company raise their outrage if they had seen that conduct by a chief executive”, the prime minister said, that the chief executive had been instructed to stand aside and, “if she doesn’t wish to do that, she can go”.

In mainstream corporate Australia, the idea of bonuses of $20,000 for staff producing millions of dollars would only raise eyebrows if no bonus was paid.

Linking pay to performance is common, including in government-owned entities such as the Future Fund[6].

But apparently not if it is done via luxury watches during a pandemic.

Part of the problem is confused corporate governance. The board of Australia Post didn’t have a clear framework for rewarding employees with bonuses.

This left the chief executive to determine how to implement a suggestion from the then chair of the board that the employees be rewarded. Increases in salary or new company cars might not have raised eyebrows, not in the way watches did.

But handing out watches didn’t break any rules. If the board had put in place detailed-enough policies for bonus payments the chief executive would have had clear rules to follow.

Those rules could have been designed with the aim of not embarrassing the government.

Its chair sided with the prime minister

Without clear rules, the chairman and chief executive should have worked as a team, and might have. In her submission[8] to the Senate inquiry, Christine Holgate says that when the watches were bought in 2018 the then chair took part in a discussion about whether to award the bonuses in the form of watches.

The subsequent chair paid greater attention to a complaint[9] from the sole shareholder even though his legal duty was to the company rather than its owner.

The more-serious scandal involving Crown Casino[11] demonstrates clearly the problems that can arise when board members appear to bend over backwards to assist the major shareholder rather than the company.

The old saying says “a person cannot serve two masters”. Directors’ duties are to their companies.