The fight between Facebook and the Morrison government is over[1] almost before it began. Having drastically overplayed its hand by banning a vast range of content, Facebook has been forced to settle for what appear to be cosmetic[2] concessions, such as a two-month period of mediation before disputes are subject to compulsory arbitration.

Its apparent decision to capitulate was doubtless assisted by the uniformly hostile[3] international reaction to its bullying tactics.

The debate in Australia has been much less one-sided. Many commentators view it simply as a dispute between Facebook and News Limited, and take the view that News owner Rupert Murdoch[4] is a greater threat to global democracy than Facebook owner Mark Zuckerberg.

This view is defensible in general, but in this specific case, it was Zuckerberg who attempted to bludgeon a democratically elected government into submission, while the established media worked through the normal political process.

More interestingly, many supporters of Facebook’s position applied a standard market analysis[5] to the media legislation.

They concluded that there was no reason Facebook (and Google) should be compelled to hand over advertising money to the media companies who benefit from links on Facebook and Google sites.

This critique seems compelling at first, if we think of both news and advertising as standard goods. But news is a special kind of good, and advertising (at least the kind of advertising in dispute here) isn’t really a good at all.

Looking first at news, it is, like other forms of information, a textbook example of a “non-rival[6]” good, rather like a magic pudding[7]. No matter how much of it I consume, there is just as much left for you and everyone else.

Before the rise of the internet, this wasn’t quite true. Most information was communicated on printed paper, which was a costly resource. But today, no matter how vital or trivial, information can be communicated to billions of people at almost no cost beyond the fixed cost of the network connecting them.

At the same time, information is costly to discover and interpret.

As a society, we have developed various ways of paying for it.

On the other hand, news is costly

We fund academic research directly through government grants and indirectly through the long-standing practice of requiring most university teachers to undertake research along with their teaching work.

Another way we fund information and analysis is by restricting access to it by erecting paywalls[8]. They work to some extent, but information has a way of leaking out past even the most secure barriers. Once public, information can spread rapidly, just like viruses (hence the phrase “going viral[9]”).

Traditionally, the most common way of funding news has been to package it with advertising. In the 20th century, the main funding source for newspapers was the “rivers of gold” provided by classified ads for jobs, real estate, cars and so on.

Read more: This week's changes are a win for Facebook, Google and the government — but what was lost along the way?[10]

Readers wanted to read the advertisements and were forced to buy them bundled with news, on occasions throwing away[11] the news part of the newspapers so they could read the ads.

Newspapers, television and radio used the revenue from the advertisements to subsidise the production of news, analysis and entertainment.

The internet has disrupted this model, enabling specialised websites such as Seek[12], Domain[13] and Gumtree[14] to provide a better service than either newspapers or their websites. 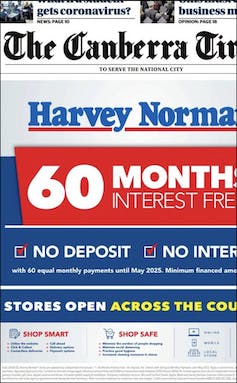 Ads that are hard to avoid. Josh Taylor[15]

When most of the ads that people want to see are removed, what’s left are ads they would prefer not to see. Newspapers, radio and TV have been forced to present them in ways that are hard to avoid.

It’s always been an unsatisfactory arrangement. In television there is a constant struggle between broadcasters who need ads to be seen and viewers who try to screen ads out. The head of Turner Broadcasting once suggested that skipping ad breaks in order to go to the toilet was a breach of contract[16].

But, unsatisfactory as the arrangement has been, it has worked well enough to keep newspapers and broadcast organisations in business.

They are able to offer advertisers much better targeting of ads than either news organisations or traditional broadcasters.

Much of the content used to make this targeting work is links to content prepared by traditional news organisations.

Read more: One of these things is not like the others: why Facebook is beyond our control[17]

We have always put up with advertising in order to get the information produced by news organisations.

Now the advertising revenue is flowing to Google and Facebook, and we have no model for funding news media in the future.

We may need direct public funding, perhaps financed by a tax on advertising.

In the meantime, forcing Google and Facebook to pay for links is not a particularly satisfactory solution, but it’s the best we’ve got.