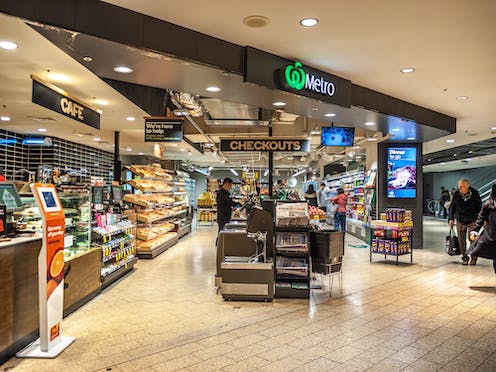 If you think your local supermarket is shrinking, you might be right.

Coles has announced[1] that it will open smaller-sized supermarkets in more locations. This follows the lead taken by other large retailers such as Woolworths[2], Harris Scarfe[3] and Target[4].

Australia’s growing population[5] may mean more customers, but it is also putting pressure on available real estate for retailers. As population density increases, mostly in urbanised areas, many retailers are shrinking to grow.

The blame for recent store closures[7] has fallen mainly on Amazon[8] and other global players entering the Australian market[9].

However, high rents[10], a lack of prime real estate, and rising inventory costs[11] and wages[12] have also contributed to the need to downsize.

Retailers have responded to increased costs and competition in two ways: either by “rightsizing” - closing underperforming and unprofitable locations[13] as Myer has done[14], or by “downsizing” - shrinking their store footprints.

Some retailers are also cleverly using smaller shopfronts as “click and collect[16]” points for their online customers.

Read more: Why retailers want you to 'click and collect'[17]

To put it in perspective, while global retailers seek retail sites[18] from anywhere between 7,500 square metres (Lululemon Athletica) to 40,000 square metres (Uniqlo), smaller stores typically measure around 600 square metres[19] which is around a quarter of the size of the average supermarket.

Prime location retail rents continue to increase due to lack of available space and strong demand from overseas retailers[20] such as Zara and H&M, who are happy to pay up to A$20,000 per square metre per year to shore up key inner city locations.

Annual average rents in trendy inner-city suburbs, like Surry Hills and Wooloomooloo in Sydney, come in at almost A$14,000 per square metre.

So if you have a very small 80sqm convenience store in a prime Sydney CBD location, your annual rent bill will be a little over A$1 million.

Read more: Location and voice technology are the future of retail[22]

Going smaller can open up new, and often better, locations. As some real estate analysts noted last year[23], “with the current environment characterised by a lack of premium retail investment offerings” retailers are increasingly finding it difficult to snap up prime locations.

But there are other benefits too, such as less inventory[25], which also means less discounting[26]. Smaller stores also require fewer staff, and less cleaning and maintenance.

What are the benefits for consumers?

Research shows that customers are increasingly suffering from choice overload, also known as the “tyranny of choice[27]”.

This is particularly so for online shoppers and for those browsing the aisles in superstores, department stores and large chain stores. A limited product offering, in a much smaller space, helps consumers make decisions more easily, and appeals to those shoppers who are primarily looking for “convenience”.

Because small retailers have less inventory, they are able to turn stock over, replenish and refresh products at a much faster pace than their larger rivals. They can promise new items arriving in store at shorter intervals[29]. The lure of “newness” is a very attractive prospect for shoppers.

Are smaller stores here to stay?

In 2018 and beyond, retailing will continue to evolve. Retailers have always had to adapt to meet changing consumer demands, advances in technology and the like.

A sure sign that physical retail is still alive and well is evident in the growing number of online retailers[30] and established brands[31] that are opening physical stores to complement their online offerings.

Just as pop-up[32] retailing has cemented itself in the retail landscape, smaller stores are also likely to become a significant long-term strategic proposition for the retail industry, where it is now “big to be small”.