The end of coal-fired generation in Australia is inevitable.

Zero marginal cost, zero emissions energy is now a reality. Wind and solar are cheaper[1] sources of new electricity than coal in most cases, putting significant pressure on the profitability of the inflexible, ageing coal generators.

The only questions are when coal-fired power stations will close and how well Australia will manage that phasedown.

That’s why we need to talk about the role governments can play to ensure the transition is orderly, maintains energy security, avoids price spikes that have followed past closures, looks after affected workers and communities, and ensures Australia meets its commitment to reduce greenhouse gas emissions by 2030 to 26-28% below 2005 levels[2]. 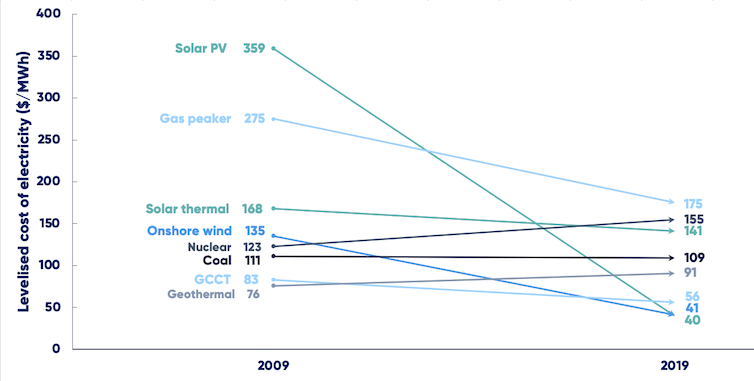 Cost of renewable energy to other sources over the past decade. Lazard, Australian Energy Market Operator

At least halving emissions from coal-fired power stations (which account for about 90%[3] of electricity sector emissions) by 2030 is an obvious route to achieve Australia’s international commitments.

Given most state governments are already committed[4] to forcing renewables into the grid at record pace, that could happen even without federal action.

But continuing down the current path will be unnecessarily costly, and pose significant risks to supply and prices as coal-fired generators exit on sporadic timelines based on their viability. These risks are part of the reason why Australia’s Energy Security Board[5] is considering mechanisms that facilitate an orderly transition from coal-fired generation to renewables as one of four priority reform areas.

National leadership and careful policy design are needed to enable coal plant operators to bow out of the market gracefully, and in a manner that secures certainty for investors, consumers, workers and communities.

Learning from past closures

Past closures of South Australia’s Northern and Playford B power stations in Port Augusta (in 2016) and Victoria’s Hazelwood power station in the Latrobe Valley (in 2017) illustrate this point.

Price spikes followed the closure of these plants. In the case of Hazelwood, majority owner Engie gave barely five months’ notice of its closure in March 2017[7]. With Hazelwood, a brown-coal-fired generator accounting for 20% of Victoria’s electricity supply and 5% of national output, the supply ramifications were significant. Victoria’s average electricity prices increased from A$60 to A$100 per megawatt hour (MWh).

These offer a stark warning to policy makers. The market requires adequate notice of coal-fired generator exits. Greater certainty provides investors with the assurance they need to build enough capacity to replace retiring coal plants, and the infrastructure to connect them to the grid. A haphazard transformation is in no one’s interests.

We outline a market-based mechanism to achieve just that in a report published by the Blueprint Institute[8], an Australian think tank established last year to promote rational, pragmatic policy proposals.

The Coalition has generally claimed to oppose market-based mechanisms — such as emissions trading schemes or carbon taxes — to reduce greenhouse gas emissions. But the Abbott government in 2014 introduced an emissions trading scheme alongside its A$2.5 billion Emissions Reduction Fund, a mechanism the Morrison government rebadged in 2019 as the Climate Solutions Fund[9]. A “Safeguard Mechanism” sets emissions caps for the country’s highest-emitting businesses, with emissions permits tradeable on the open market.

Read more: Australia's new cap on emissions is a trading scheme in all but name[10]

To facilitate the orderly phasedown of coal-fired electricity generation, we propose a “Coal-Generation Phasedown Mechanism” (CPM), leveraging the Safeguard Mechanism to establish sector emissions targets — for 2026, 2028 and beyond 2030.

A key component of the CPM is the use of auctions to achieve withdrawals of coal generation from the electricity market. Auctions are commonplace in commercial and government contexts. The federal government has long used auctions to allocate telecommunications spectrum, for example, and the Emissions Reduction Fund uses reverse auctions to buy the most cost-effective emissions abatement.

The CPM would set emissions targets to phase down coal-fired generation to halve current emissions by 2030. Under a well-designed auction system, the least profitable coal generators would withdraw from the market first, ensuring emissions reductions occur at minimum cost.

One possible scenario is shown in the graph below. Example generators have been chosen based on their operating costs and approximate remaining life. Those with higher costs and a shorter remaining life have greater incentives to bid for earlier exits.

A scenario showing how the CPM could reduce coal-fired generation to 2030. source

The CPM should also be designed to ensure financial support for affected workers. This could be in the form of redeployment, retraining opportunities or generous remuneration in the case of retrenchment.

A phasedown of coal-fired generation will come at a cost to someone — either taxpayers or investors in coal-fired generation. This cost can be made larger or smaller. It can be hidden from view. But it cannot be avoided. The proper role for government is to minimise and fairly distribute those costs.

We can’t predict exactly how much the phasedown will cost, because that depends on information known only to the generators. But a market-based mechanism is sure to minimise those costs.

At one extreme, the federal government could pay generators to close by fully compensating auction participants for the loss of future profits, as has been adopted in Germany[11]. But this would likely require a federal funding commitment significantly larger than under the existing Emissions Reduction Fund, which might make it politically unpalatable.

At the other extreme, the government could charge operators for the right to stay open. One significant advantage of this option is it would raise revenue that could then be used to support directly affected communities. This could be modelled on Western Australia’s “Royalties for Regions” program, which allocates a quarter of the state’s mining and petroleum royalties to programs benefiting regional and rural areas.

A funding allocation between these two extremes is also possible, decided through government negotiation with the industry.

Ultimately, the question of who pays is a political decision. But political difficulties shouldn’t be used as an excuse for delay. The economic rationale for the CPM stacks up either way.

We must avoid another Hazelwood or Port Augusta, and coordinate an orderly grid transformation that provides certainty to communities, workers, investors, and consumers alike.