Oysters are filter feeders, extracting nutrients from the water, so that makes them very susceptible to water pollution such as that from bushfires.

We are trying to understand how ash from the 2019-20 bushfires has affected the waterways and oyster farms of New South Wales. Their production is worth more than A$59 million[1] a year.

On the state’s south coast we’re working with oyster farmers as citizen scientists to determine how the ash can lead to harmful algal blooms and oyster deaths.

Over the past two years, farmers have taken more than 9,000 water and oyster samples across 13 estuaries. It’s the largest ever set of water quality and oyster health measurements from oyster-producing estuaries.

This spans the period before, during and after the recent bushfires, providing a unique opportunity to track their impact. 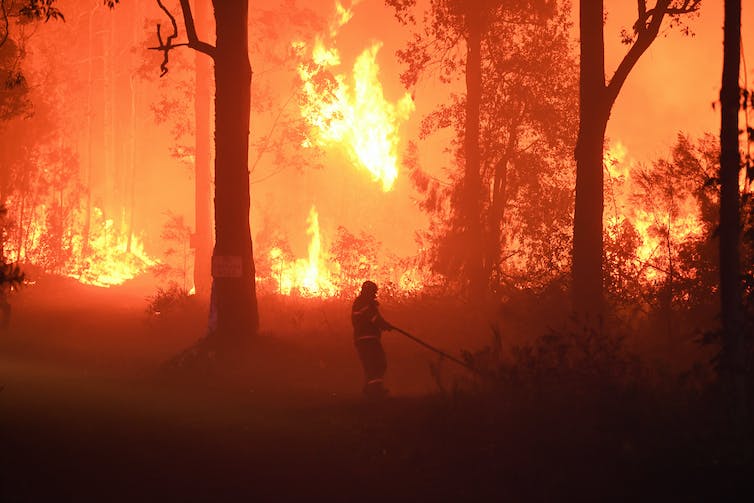 The bushfires leave ash which can pollute the waterways. Dean Lewins/AAP Image

We are still analysing results, but it’s already clear the combination of bushfire ash followed by rainfall led to large increases in microalgae (phytoplankton) in estuaries, including species that can cause harmful algal blooms.

From coast to coast

More than half of the value of Australia’s oyster industry comes from NSW. Along the state’s 2,000km coastline, oyster leases are found in 32 estuaries, north to the Tweed River near the Queensland border and south to Wonboyn Lake near the Victorian border.

Read more: Summer bushfires: how are the plant and animal survivors 6 months on? We mapped their recovery[2]

Leases are occupied within estuarine ecosystems, with each of these estuaries having a unique climate, catchment condition, area and entrance type.

Some of the NSW farmers are both oyster farmers and Rural Fire Service members, who faced the unenviable task of trying to save both their livelihoods and their homes at the same time during the 2019-20 fire season.

Oysters provide ecosystem services to waterways in which they grow. They shelter invertebrates such as worms, crabs and snails, and they provide natural breakwalls for shoreline protection.

Via their filter feeding of microalgae, individual oysters can filter several litres of seawater per hour[3], and their presence improves water quality[4].

Oysters are used as early-warning biomonitors of waterway health in environmental monitoring programs around the world.

Our new approach to examine the effect of water quality on oyster health is to look at environmental DNA (eDNA). This means we filter water and extract DNA directly from the filtrate. We then use molecular genetic tools to detect and quantify harmful microalgae and bacteria[5].

The ripple effect: from bushfire to waterway

The recent bushfires were a timely reminder that what happens on land can impact waterways and that coastal regional areas are susceptible.

Many oyster-growing estuaries were impacted by bushfires in their catchments, especially on the NSW south coast.

While rain this summer[7] gave a reprieve from the fires, it can wash ash into the estuaries, bringing with it excessive nutrients (nitrogen and phosphorus) or trace elements (iron, manganese, arsenic, chromium, aluminium, barium and lead).

These supplements can act as fertilisers, triggering the excessive growth of marine microalgae.

The growth of some microalgae is essential, but an excess of certain microalgal species (some of which can naturally produce toxins) can result in harmful algal blooms[8].

A harmful algal bloom in an estuary will trigger the closure of oyster harvesting until oysters are clean. One of the largest and most significant harmful algal blooms impacted the Tasmanian shellfish industry[9] in 2012-13. It resulted in an economic loss of around A$23 million.

Bushfire ash may have a more direct impact, by covering the surface of the water so light, which microalgae need to grow, can’t penetrate. This can cause microalgae to die or grow very slowly.

A mass death of microalgae could then change the amount of oxygen available in the water for the growth of oysters and other marine life. Excessive particulate matter in the waterway can also clog the gills of oysters, affecting their ability to filter feed.

In Australia, seafood is very safe to eat. Strict monitoring and testing by government regulators[10] have ensured illnesses are extremely rare. 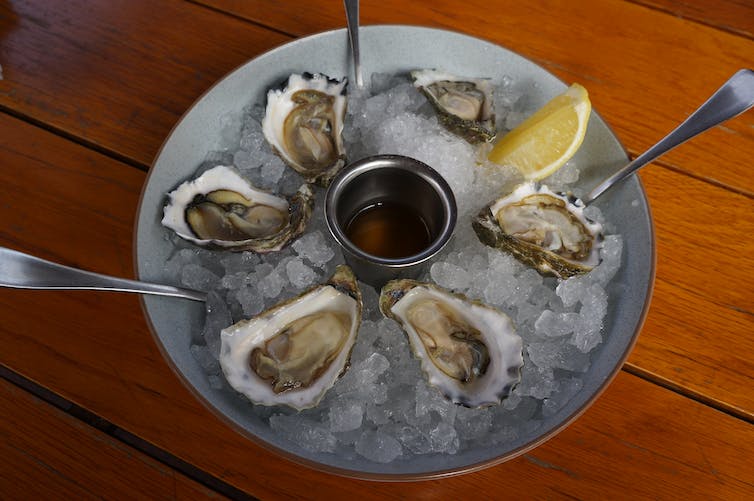 Government regulators are active participants in developing new, more streamlined approaches to food safety monitoring. This combination of scientists, government regulators and oyster farmer citizen scientists working together is a model for a healthy and viable future for oyster aquaculture in the face of challenging events.

After all, oysters are regarded[13] as one of the most sustainable forms of animal protein so they need our protection.

Read more: The surprising benefits of oysters (and no, it's not what you're thinking)[14]

A recent study[15] showed that replacing 10% of animal protein with oysters in the diet of the US population would lead to greenhouse gas savings equivalent to taking 11 million cars off the road.

Australia also has a rich heritage[16] of oyster aquaculture. For thousands of year, oysters were a staple food of First Nations people.

The Sydney Rock Oyster[17] is one of the native species that’s been cultivated as a profitable industry in Australia since European habitation.

They’ve been farmed sustainably for more than 150 years. These oysters are still the basis of a profitable industry, which has grown in size over recent years.

We hope the results of our research will ensure the long-term viability of an industry worth millions of dollars[18] to the Australian economy but, just as importantly, helps support many coastal communities.