Overwhelmingly, the 50 leading Australian economists surveyed by the Economic Society of Australia and The Conversation ahead of Thursday’s economic statement[1] want the government to keep spending to support the economy — even if it means a substantial increase in debt.

The question is the third asked in the Economic Society-Conversation monthly poll[2], which builds on a series of polls conducted by the society since 2015.

Each was asked whether they agreed, disagreed, or strongly agreed or strongly disagreed with this proposition:

Governments should provide ongoing fiscal support to boost aggregate demand during the economic crisis and recovery, even if it means a substantial increase in public debt

Only three of the 50 economists polled disagreed with the proposition, none of them “strongly”.

It is one of the starkest results in the survey’s five-year history. 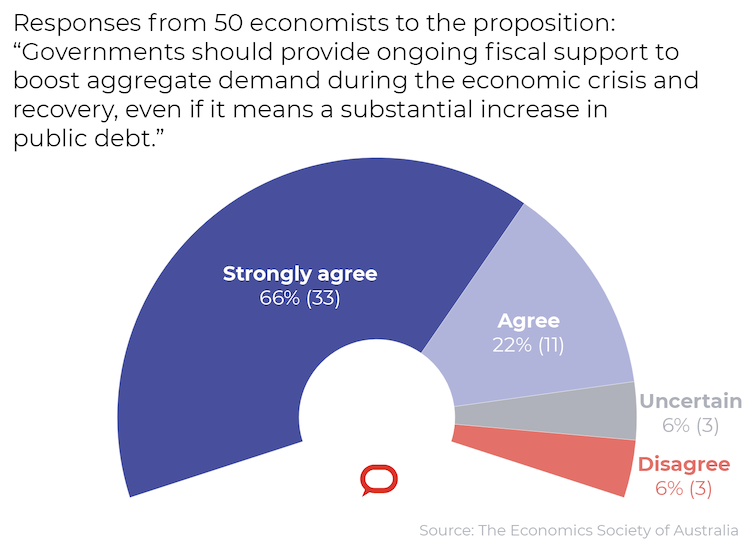 The Conversation, CC BY-ND[3] Of the 50 economists polled, 44 supported the proposition, 33 of them “strongly”. Of the remaining six, three were uncertain, and provided well-argued accounts of their reasoning which are published in full along the responses of each of the other participants at the bottom of of this article. Debt now, concern later Rachel Ong of Curtin University said the amount of public debt that has accumulated during the COVID-19 crisis was at a historical high and had to be repaid at some point. But she said governments had to be careful about removing support until the economy was clearly on a trajectory of recovery. Nigel Stapledon of the University of NSW said while some level of on-going support was needed, at some point the cost would be larger than the benefit. Some sectors, including universities, will have to permanently adjust to lower incomes. Read more: Bowing out gracefully: how they'll wind down and better target JobKeeper[4] The economists who strongly agreed said that if not enough support was provided or if it was withdrawn too early, the resulting recession would itself make the debt that had been run up less sustainable (Fabrizio Carmignani, Griffith Business). Financial markets are keen to lend Beth Webster of Swinburne University argued the only real limit to government spending was high and damaging inflation. If the government was worried about debt, it could finance its spending in other ways, by borrowing from the Reserve Bank (which could itself create money and “monetise” the debt). Sue Richardson from the University of Adelaide agreed, using a technical term to argue that the was economy was “so far inside its production possibility frontier” (producing so much less than it was capable of) and inflation was so dormant, that there was a case for creating money. Saul Eslake said that wasn’t necessary. Even with the hundreds of billions committed, financial markets appeared to be comfortable with the debt and keen to lend. Debt is how we do things Reserve Bank board member Ian Harper said the Commonwealth could borrow for 30 years at about 1%. “Can we expect the economy to grow faster than 1% per annum in nominal terms over a 30-year horizon?” he asked rhetorically. “I would have thought that’s a shoo-in,” he answered. If so, then the debt would be easily serviced. Consulting economist Rana Roy pointed out that public debt was “not an anomaly”. It was an enduring and defining feature of the modern economy, providing an enduring and defining asset class, sovereign bonds, which were in high demand. Read more: Australia's first service sector recession will be unlike those that have gone before it[5] Of the three economists who opposed the proposition, Tony Makin of Griffith supported “supply side” measures such as JobKeeper[6] that would keep firms in business but opposed “demand side” measures to boost consumer spending, saying they would ultimately prove counterproductive. Escalating public debt would induce capital inflow, drive up the dollar and make Australian businesses less competitive. Although interest rates are at present low, they would increase when the debt had to be refinanced. Doubts for differing reasons Paul Fritjers of the London School of Economics said he would normally support running up government debt for the sake of the economy, but could not support it being run up to support an economy the government itself had run down. The government should wean the population off of its “irrational fears” and letting “normal economic life return”. Although strongly argued, these views were more weakly held than those of the majority. 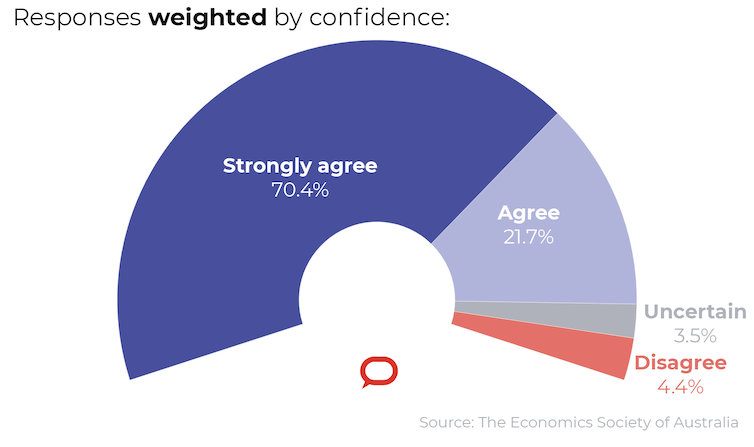 The Conversation, CC BY-ND[7] Participants were asked to rate the confidence with which they held their opinions on a scale of 1 to 10. When adjusted for these ratings, the proportion prepared to countenance a substantial increase in public debt climbed from 88% to 92.1%. The proportion opposing it fell from 6% to 4.6%. Tommorrow’s economic statement[8] will be the last budget and economic update before the budget itself on October 8[9]. Individual responses