The pandemic has changed the way we think about supply chains, in particular the chains that feed our need for food[1], medical supplies[2], and defence equipment[3].

It has led Prime Minister Scott Morrison to frame access to supplies in terms of economic sovereignty[4].

Andrew Liveris, now an advisor to Morrison, and a former Dow Chemical Chief and advisor to both the Obama and Trump administrations, is pushing for re-shoring[5] of critical supply chains.

“Australia drank the free-trade juice and decided that off-shoring was okay,” he is quoted as saying. “Well, that era is gone.”

But ensuring supplies can withstand shocks needn’t mean bringing production onshore. It might make it harder.

Firms usually talk about managing supply risk in terms of resilience or robustness. 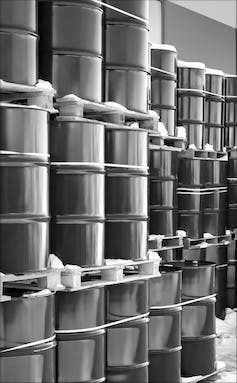 Robustness[6] is the ability to continue supplying during a disruption (for a while we didn’t have this with toilet paper).

Resilience[7] is the ability to get supplies back to normal in an acceptable time frame (which we had with toilet paper).

For critical supplies, robustness is the most important, but it hard to achieve for entire categories such as “medical equipment”. There, stockpiling is of limited use.

The United States has a stockpile of oil[8], enough to fill half of its car tanks. Canada has a vault of maple syrup[9], called a “strategic reserve” – about 80,000 barrels worth.

But when it comes to stockpiling “medical equipment” we might put a lot of effort into stockpiling ventilators, for example, only to find that the next emergency requires something different, or a different type of ventilator.

We are exposed at choke points

Half of global facemask production is concentrated[10] in China. China’s factories closed during its lockdown at the time global demand simultaneously soared, resulting in a major shortages.

Australia is one of the most food-secure nations on earth, exporting far more than it needs[11], but a 2012 department of agriculture report[12] found that many of the inputs, including pesticides and packaging, especially long-life packaging, were made overseas.

We got a taste of that vunerability in March 2020. After drought-breaking rains across the country generated a spike in demand for these essential farm inputs, supply tightened[14] due to coronavirus-related restrictions in China.

Disasters can happen here too

While worth considering as part of the solution, re-shoring won’t achieve this.

Japan’s 2011 Japan earthquake illustrates the point. Japan is self-sufficient in auto parts, but the earthquake hit the region that supplies them[16].

Read more: The US has bought most of the world's remdesivir. Here's what it means for the rest of us[17]

If we do re-shore, it will make sense to continue to use at least one international supplier to ensure diversification. Self sufficiency isn’t the same as robustness.

Given the extent of our trade with China, the best approach might be China-Plus-One[18]. It could mean one stream of the supply of a good coming through China and another coming through, for example, Vietnam.

It’s an approach adopted by Japan[19].

Re-shoring can play a role, but we are going to need a top-down assessment of the risks facing supplies of critical goods, and quite possibly the imposition of robustness requirements on firms distributing them.

Those firms can be offered a diversification tax credit.

A robustness strategy would be more likely to be pro-trade rather than anti-trade, but we won’t know until we do the work. It’d be best to start before the next crisis.