One aspect of the COVID-19 crisis that has so far escaped widespread public attention in Australia is its potential impact on our food security.

We haven’t seen supermarket shortages of fruit and vegetables like toilet paper and pasta because, being perishable, they are not easily stockpiled and therefore less prone to demand-side spikes.

Read more: When the coronavirus gets tough, the tough get stockpiling[1]

But being perishable also makes them more susceptible to supply-side shocks, such as we’re seeing with higher prices now for the likes of broccoli due to the impact of drought and bushfires[2]. 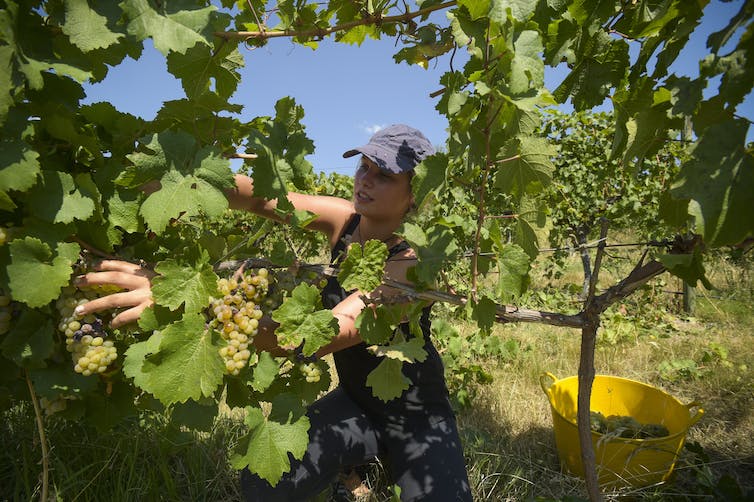 The major variable in whether the coronavirus crisis will hurt fruit, vegetable an nut supplies (and prices) depends on how they are picked while the nation’s border remains closed to the foreign seasonal workers on which Australian farmers depend.

Rural Australia’s dependence on the muscles of tens of thousands of backpackers and workers on temporary working visas is sometime minimised by official statistics.

More than one-third of peak seasonal jobs on horticultural farms are filled by overseas workers, according to the Australian Bureau of Agricultural and Resource Economics and Sciences[3].

But anyone in direct contact with the industry knows most direct harvest labour in Australia is done by foreigners.

Official statistics about agricultural workers are rubbery. The Australian Bureau of Statistics, for example, can only estimate the total number of workers at between 240,000 and 408,000.

The vagueness is due to three reason. First, the data is based on a single month (in this case August 2016) and picking work is seasonal, with less workers employed in winter. Second, workers move around, so double-counting can occur. Third, overseas workers and contract workers provided by labour hire companies are not included in labour force surveys.

What immigration data tells us, however, is that in 2017-18 about 31,000 backpackers did at least 88 days of farm work to be eligible to extend their visas for a year. (There are no numbers for the number of backpackers working on farms for other reasons.)

A further 8,500 workers from Pacific Island nations and Timor-Leste worked on farms for up to six months on visas issued under Australia’s Seasonal Worker Programme[4]. This increased to about 12,000 in 2018-19[5]. 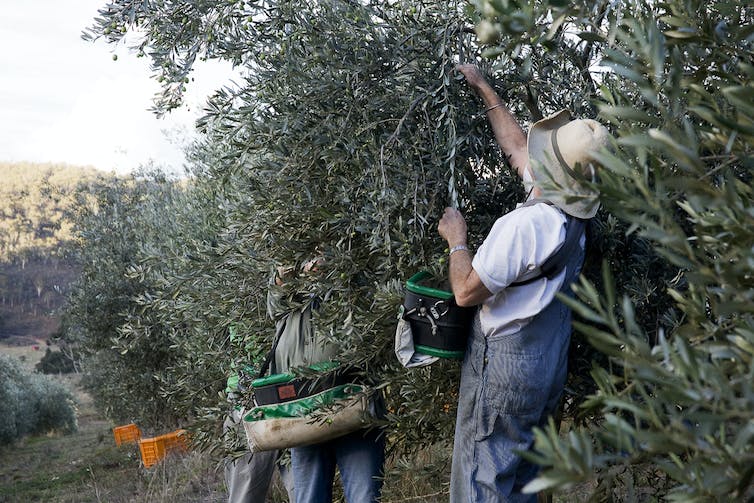 The question is whether the spike in domestic unemployment will see Australian workers (and other foreign workers) displaced from other sectors[6] flocking to rural areas to take up those jobs.

Possible complications are travel restrictions, with states closing borders[7] and city dwellers being told to stay away[8] from Australia’s country towns, and the Australian government’s income assistance measures.

As migration researcher Henry Sherrell[9] notes of the job seeker allowance being doubled to A$550[10] a week, “that’s a pretty decent week if you’re on picking piece rates”.

“In theory, Australians laid off in the many sectors now facing recession could head for the countryside and start picking fruit,” he argues in an article[12] co-authored with Stephen Howes, an economics professor at the ANU Crawford School of Public Policy.

In practice, it is just not going to happen. The work is difficult, and farms often geographically isolated. It would take years not months to change the reality that farm work is just not in the choice set of most Australians – who, after all, live in one of the most urbanised and richest countries in the world.

An exemption for seasonal workers

Allowing backpackers and seasonal workers in Australia to extend their visas is an obvious first step. On top of any measures to encourage foreign workers to stay, the longer term may require make an exception to the ban on their entering the country.

The entry of seasonal workers from the Pacific and Timor-Leste already requires medical checks[13] before they travel. Exempting those with seasonal work visas from our closed border policy would not be unreasonable. Canada, which runs a similar guest worker program, has already done so[14].

With Australian help, workers could be tested for COVID-19 before they fly. On arrival here they would be quarantined for 14 days like everyone else.

The government would need to step in and pay for suitable accommodation, catering and medical services. It would also need to ensure arrangements so workers can get home. But there are there a number of benefits to justify the cost.

Read more: How migrant workers are critical to the future of Australia's agricultural industry[15]

It contributes not only to Australia’s food security but also its national interest, maintaining and deepening its bonds with its island neighbours.

If there is a silver lining to the current grim situation, it may be that it could serve to make real the rhetoric that our relationship with the Pacific (and Timor-Leste) is one defined by partnership, in which we help ourselves through helping each other.