In 1997, a bestselling book[1] by Jared Diamond purported to explain how the West “won” world dominance based on the good luck of geography, and because western countries were the first to industrialise.

Fast forward to 2020, and to COVID-19. Geography still matters, but the West is no longer “winning”.

Despite initial mistakes, it seems China[2] has been successful at containing the virus, and other countries such as South Korea and Singapore have, so far, been able to dramatically slow the rate of infection.

While cross-country comparisons on confirmed cases are problematic[3] because of large differences in testing, the United States currently has more than 137,000[4] confirmed cases – the highest in the world, more than in China.

This number will get much larger very quickly if cases continue to double every few days.

The number of Americans who will die will soon be in the thousands, and possibly tens of thousands, if the US does not do much more at a national level to ensure physical distancing.

If the current growth rate continues, parts of its health system, especially intensive care units[5], will be overwhelmed. 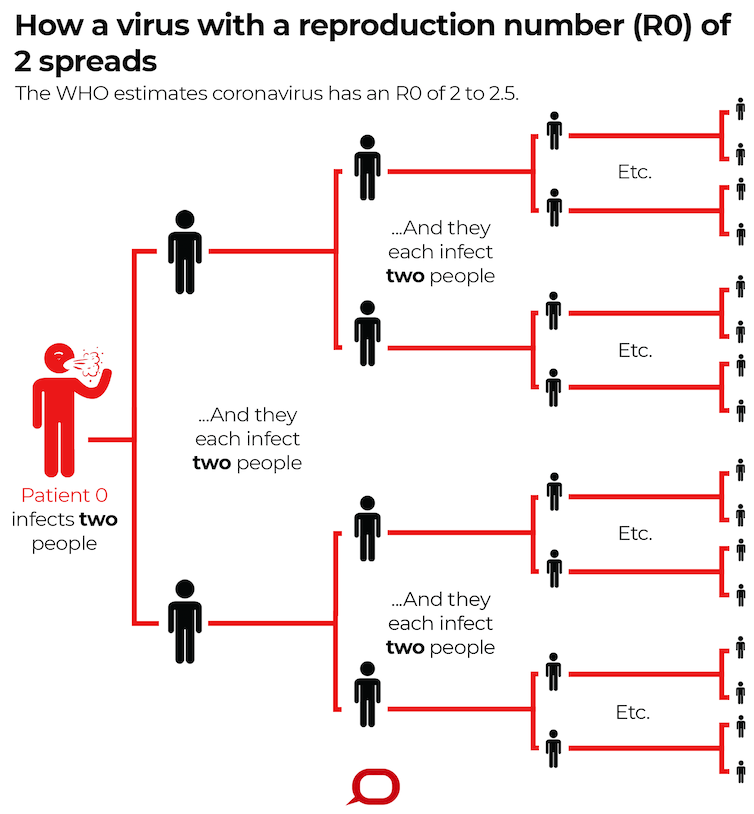 The Conversation, CC BY-ND[6] This allows us to accurately predict, with a basic disease spread model[7], the minimum, maximum, and most likely number of confirmed cases, at least for the next week or so (although it should be noted that an increased rate of testing will increase this number). The data tells us that for countries in the earlier phase of the pandemic such as Australia the number of confirmed cases doubles every few days. Read more: How to flatten the curve of coronavirus, a mathematician explains[8] In Australia it began by doubling roughly every four days, and is now doubling every seven days. (The number undoubtedly underestimates the rate of infection.) Australia had about 2,000[9] confirmed cases on 24 March. Given rates of infection and changes in growth, our forecasts of infections made on March 27 for Sunday March 29 ranged from 3,950 to 4,460. Robust short-term predictions The actual reported number on Sunday March 29 was 3,984, near the low end of that range. Our forecast for 6pm on Wednesday April 1 now ranges from 5,080 to 5,970 cases, with 5,220 most likely. For Thursday April 2 the range is 5,510 to 6,835, with 5,715 most likely. Until physical distancing has had an effect, exponential growth is as good as certain. This will make our forecasts robust. The current measures might already be cutting infection growth rates, but it is too early to tell. Even stricter measures will be needed to cut the number infected. With sufficient physical distancing, Australia could end up with an infection rate as low as 1%. By comparison, if it fails to control the infection by not implementing sufficient physical distancing, it could end up with a much worse rate of 20%. The payoff from going hard and going early What is the difference in the number of deaths between an infection rate of 1% versus 20%? Overseas death rates suggest Australia could face an additional 48,000 premature deaths without distancing. This is equivalent to about 30% of annual deaths in Australia. Although recent evidence[10] suggests young people might be more vulnerable than previously thought, those premature deaths would be clustered in the old and those with other illnesses, and those also in remote Indigenous communities, should the virus get there. Read more: New OECD estimates suggest a 22% hit to Australia's economy[11] Economists use the value of an economic life[12] for cost-benefit analysis of public projects. It is a measure of society’s willingness to pay to reduce the risk of an additional death. Using the New South Wales Treasury’s value of a statistical life[13] of $4.2 million, the economic loss of 48,000 premature deaths amounts to some $200 billion, or about 10% of Australia’s annual economic output. This means it makes sense to act early and hard before the infection rate gets too high, cutting it as quickly as possible. The Spanish Influenza pandemic suggests aggressive physical distancing[14] works. The question Australians should ask of their leaders is this: is strict physical distancing a cost worth paying? Costs and benefits from distancing The main economic benefit from insufficient physical distancing would be that, at least initially, more Australians would stay employed, there would be more economic activity, more taxes would be paid, and government would need to spend less. But not imposing a lockdown or equivalent measures would come at the cost of a higher infection rate, which would also mean more non-pandemic patients might die because of insufficient beds or medical equipment or staff to look after them. A higher infection rate would also increase the death rate of pandemic patients as there would be fewer ventilators available to treat each one. Read more: Why defeating coronavirus in one country isn't enough – there needs to be a coordinated global strategy[15] And the economy would suffer even without sufficient physical distancing, although the worst would be delayed. Many people would still get sick and be unable to work until they were recovered. A much higher infection rate would also isolate Australia from the rest of the world. Why would any country want Australians to visit if it had high rates of infection, and why would anyone from another country want to visit Australia? The wage subsidy provides a way out A high enough wage subsidy for all workers (including part-timers and casuals) who cannot work because of control measures, coupled with the already announced additional $550 a fortnight COVID-19 supplement to the Jobseeker Payment[16], could provide most Australians with enough income to survive and pay the bills during a lockdown. Such an approach combines “sharing the burden” with “flattening the curve”, a two-fold economic and public health approach that would save lives while minimising economic disruption, especially for younger and casual workers who are the most disadvantaged by severe physical distancing. It’s the smartest and safest strategy, and Australia appears to be adopting it. Our model for the spread of the infection is an adapted [SEIR-M] model. It is still under development and needs further validation and also peer-review. For now, we assume a homogeneously mixed population. We are also working on a spatially explicit model to account for more complex population contact. Read more: 'Overjoyed': a leading health expert on New Zealand's coronavirus shutdown, and the challenging weeks ahead[17] Our current results are roughly in line with changes in basic growth rates and their projections by state. We will continue to provide forward projections that can then be compared with actual numbers. All data is sourced from state and commonwealth websites. A valuable discussion of this and more complicated infectious disease models is found on the University of Melbourne Pursuit[18] website. This piece is co-published with Policy Forum[19] at the ANU Crawford School of Public Policy.