Shoppers in Australia[1], Japan[2], Hong Kong[3] and the United States[4] have caught toilet paper fever on the back of the COVID-19 coronavirus. Shop shelves are being emptied as quickly as they can be stocked.

This panic buying is the result of the fear of missing out. It’s a phenomenon of consumer behaviour similar to what happens when there is a run on banks.

A bank run occurs when depositors of a bank withdraw cash because they believe it might collapse. What we’re seeing now is a toilet-paper run.

A bank holds only a fraction of its deposits as cash reserves. This practice is known as “fractional-reserve banking”. It lends out as much of its deposits as it can – subject to a banking regulator’s capital-adequacy requirements[6] – making a profit from the interest it charges.

If every customer simultaneously decided to withdraw all of their deposits, the bank would crumble under the liability.

Why, then, do we not normally observe bank runs? Or toilet paper runs? 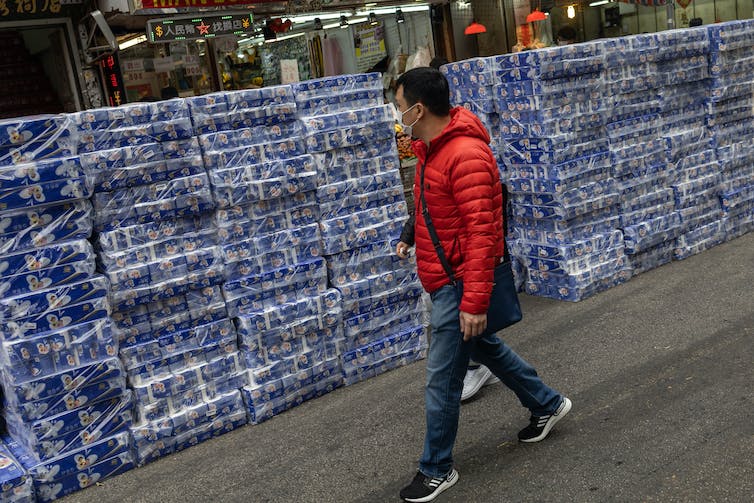 The answer comes from Nobel-winning economist John Nash (played by Russell Crowe in the 2001 movie A Beautiful Mind[7]). Nash shared the Nobel prize in economics[8] for his insights in game theory, notably the existence of what is now called a “Nash equilibrium[9]” in “games”.

Both banking and the toilet-paper market can be thought of as a “coordination game”. There are two players – you and everyone else. There are two strategies – panic buy or act normally. Each strategy has an associated pay-off.

If everyone acts normally, we have an equilibrium: there will be toilet paper on the shop shelves, and people can relax and buy it as they need it.

But if others panic buy, the optimal strategy for you is to do the same, otherwise you’ll be left without toilet paper. Everyone is facing the same strategies and pay-offs, so others will panic buy if you do.

The result is another equilibrium – this one being where everyone panic buys.

So either no one panic buys (a successful coordination) or everyone does (a coordination failure).

The fear of everyone else panic buying has made some people panic buy as well. But those who are panic buying are not acting irrationally. They’re not stupid! They are executing an optimal strategy because the fear has a basis in reality: many people have experienced going to supermarkets and finding empty shelves.

Read more: Stocking up to prepare for a crisis isn't 'panic buying'. It's actually a pretty rational choice[10]

Obviously, though, only one of these equilibria is desirable. So what can we do to prevent coordination failure?

One solution is a market mechanism – allowing the price of toilet paper to increase to reduce demand. This is unlikely to happen, though, given the potential backlash associated with “price gouging”.

There are two other solutions.

The first is for the government to step in as guarantor.

In 2008, for example, the market crash engendered by the subprime mortgage crisis left multiple Australian banks vulnerable to depositor runs. In response, the Australian government announced a guarantee scheme[11] for deposits. Depositors, assured the government would cover their losses even if their bank collapsed, no longer had the fear of being caught out by not withdrawing their savings.

In the case of toilet paper, the government acting as guarantor might involve holding a strategic stockpile of toilet paper. But all things considered – from logistics to costs – this probably isn’t a very good idea.

The second solution is to ration the commodity – putting limits on the amount a customer can buy. Imperfect though these buying limits are, they are feasible, as shown by the restrictions put in place by Australia’s supermarkets[12].