One way to count the cost of the Wuhan coronavirus is by how many people catch it, and then how many die. Another is the direct financial costs of public health measures to treat those infected and contain its spread.

Yet another is the wider economic cost. But how to calculate this?

Some suggest a neglible impact on the global economy if the death toll is less or similar to the SARS outbreak[1] in 2002-03.

Read more: What we know suggests the economic impact of Wuhan coronavirus will be limited[2]

But the economic impact is not directly tied to the number of people who get sick (morbidity) or die (mortality). It almost wholly depends on the indirect effects of the decisions that many millions of individuals make to minimise their chance of catching the virus, and the decision of governments on how to react to the threat.

This means the Wuhan outbreak could directly affect relatively few people, compared to past pandemics, yet still pack an intense punch in a more interconnected global economy.

We can draw lessons from the SARS (Severe Acute Respiratory Syndrome) experience, the first epidemic of the 21st century.

SARS was another coronavirus. As the Wuhan virus emerged in late December from an animal market, SARS originated from animal markets in the southern Chinese province of Guangdong in November 2002.

Zoonotic epidemics – diseases emerging from animal hosts – are not new. But they are becoming more common with closer proximity between wild animals, domesticated animals and people; and they spread more rapidly due to increased movements of people within and between countries. Their economic risk is also likely to increase[3].

SARS spread to infect individuals across 26 countries in a matter of weeks. Fortunately it was then contained relatively rapidly. Ultimately about 8,500 people caught it. The mortality rate was about 11%[5] with fewer than a thousand deaths. 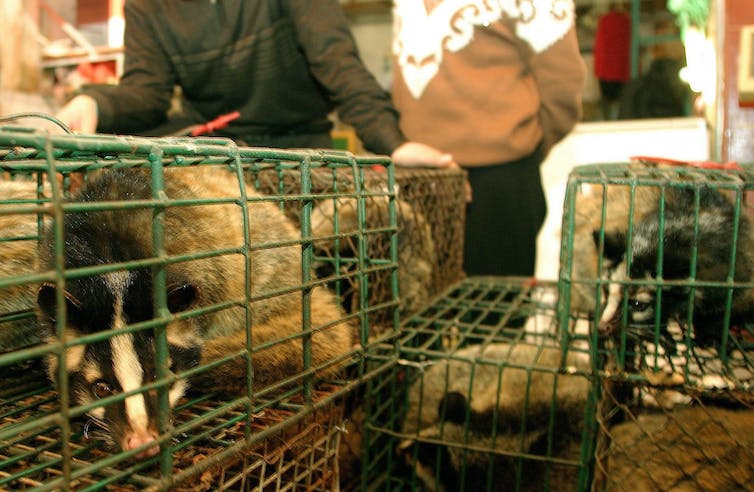 Civet cats in an animal market in Guangzhou in January 2004. SARS is thought to have been transferred from bats to civet cats and then to humans. Paul Hilton/EPA

The SARS outbreak was, of course, devastating to its victims and their families. But its public-health impacts were relatively limited and short-lived. It nonetheless had significant economic impacts. Though fewer than 10,000 people were directly infected, tens of millions of individuals changed their behaviour out of fear of catching the virus.

These behavioural changes were partly driven by government directives, but more importantly by personal judgments about risks.

In a survey of 705 people in Hong Kong at the height of the SARS epidemic, 23% of respondents feared they were likely to become infected with SARS. The actual infection rate was only 0.0026%[7]. In the US, where 29 people were infected[8] and no one died, 16% of survey respondents felt they or their family were likely to get infected with SARS[9].

Read more: How contagious is the Wuhan coronavirus and can you spread it before symptoms start?[10] 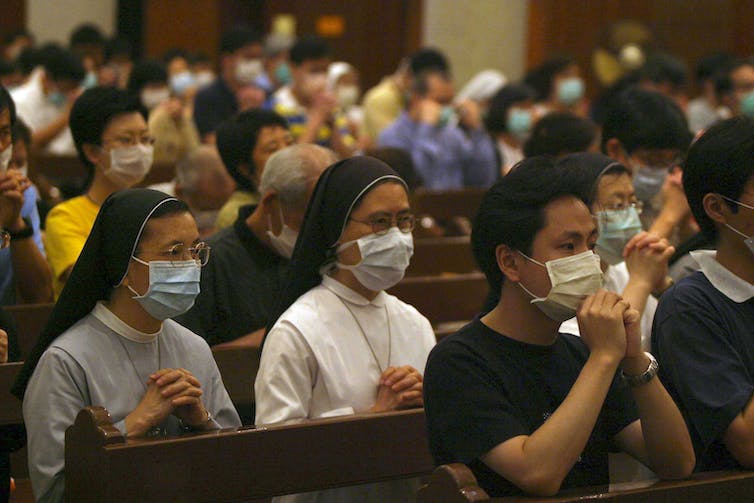 Evening mass at a Catholic church in Hong Kong on Saturday, May 10 2003. David G. McIntyre/EPA

The economies of China, Hong Kong, Singapore and Taiwan[11] were hardest hit. At the height of the epidemic, international visitor arrivals fell dramatically in these four countries. According to World Bank research, GDP losses to these countries amounted to US$13 billion[12]

In Beijing, the losses to the tourism sector were estimated to be 300 times[13] the direct cost of medical treatment for SARS in the city.

Panic is easy to spread

A complete tally of the cost of SARS has never been undertaken, but what we do know about the SARS experience is most likely a good guide to what the costs of the Wuhan outbreak might be. It will be the reactions of governments and individuals to the perceived threat of the virus, and not the virus itself, that will have the biggest economic costs.

The Chinese government has imposed a mandatory curfew on more than 30 million people[14]. It’s possible hundreds of millions more are changing their plans willingly or because they are being instructed to do so.

Examples include Hong Kong and other countries now hesitating to allow in Chinese tourists[15], and citizens of other nations being advised to avoid travelling to China. The US Centers for Disease Control, for example, has recommended against all non-essential travel to China, including areas far from Wuhan[16].

We do not yet know enough about the virulence of this coronavirus, though the preliminary evidence suggests its mortality rate is much lower than that of SARS.

But with social media, panics can also spread more rapidly and further. All signs point to a global overreaction to this crisis, and therefore to an amplified economic impact. Even highly reputable media outlets such as The New York Times have not proven immune to sensationalism, promoting stories with dramatic headlines such as “Alarm Grows as Markets Tumble and Death Toll Rises[18]”.

We should all, therefore, rely as much as possible on verifiable information. Preventing the contagious spread of inaccurate and exaggerated information comes a close second to our responsibilities to prevent the spread of the virus itself.