MARTIN stands for “Macroeconomic Relationships for Targeting Inflation[1]”, or perhaps merely for “Martin Place” which is the location of the Reserve Bank’s headquarters in Sydney.

It’s the bank’s new computer model of the Australian economy, made up of 147 equations working in concert. Some are quite simple, such as how global oil prices affect domestic petrol prices, whereas others are more complex, such as how a rise in the unemployment rate affects household spending. 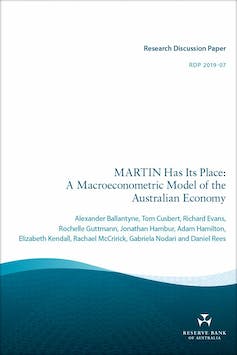 Reserve Bank of Australia[2] Unveiled in August in a discussion paper entitled “MARTIN has its place[3]”, the model is available for use by analysts outside the bank for whom it can serve as something of a guide as to what the bank might be thinking. It provides useful insights into what the bank will do next, after it has cut its cash rate as close to zero as possible and needs to stimulate the economy further. It’s a topic Governor Philip Lowe will expand on tonight in a landmark speech to business economists in Sydney[4]. What’s MARTIN, what’s a model? Economists use models like drivers use maps – to take a large and complicated country and simplify it to its essential ingredients in the hopes of providing a useful guide to navigating it. A map doesn’t tell you everything about a route – that would be hard to come to grips with – but it highlights important features or paths you should watch for. Models do the same – simplifying the complex Australian economy into the paths that matter. But instead of breaking Australia down into rivers and roads, or cities and states like a map might do, MARTIN divides the Australian economy into different sectors such as households, firms and the government with the 147 equations describing the ways they interlink with each other. This map is principally designed for two purposes. The first is forecasting. Every three months the bank looks inside its crystal ball to try and divine how the economy will evolve in the years to come. MARTIN has become a key input into that process. The second use is the ability to run “what if” simulations to see how the economy would react in different scenarios. For example, what would happen if the price of iron ore crashed tomorrow, or what would be the impact if the government ramped up its spending on infrastructure? What does MARTIN say about quantitative easing? MARTIN will have been put to work pondering the implications of deploying so-called “quantitative easing” after the Reserve Bank’s cash rate gets too low to cut. Quantitative easing involves the Reserve Bank buying financial assets, such as government or mortgage bonds, in order to continue to supply money to the economy after its cash rate has fallen to zero. I have used MARTIN to model three different scenarios for quantitative easing in the Australian economy. The first is what would happen if quantitative easing isn’t used at all. The second is what would happen if the bank started a modest quantitative easing program in early 2020 lasting around a year. The third is what would happen if the bank commenced an aggressive quantitative easing program to simulate the economy for 18 months. Read more: Below zero is ‘reverse’. How the Reserve Bank would make quantitative easing work[5] I assume the bank would purchase assets in a similar manner to how the US conducted quantitative easing after the global financial crisis, buying bonds to lower interest rates on two year and ten year government securities. MARTIN says quantitative easing would have two major effects on the economy. First, it would lower the cost of borrowing for Australian businesses. They would be expected to increase investment as more projects become viable as the interest rates they were charged fell. Second, the lower rate structure would weaken the Australian dollar by as much as 5 US cents. A cheaper dollar would make our exports more competitive and make foreign imports more expensive. MARTIN thinks it could work MARTIN predicts quantitative easing would boost manufacturing, agriculture and mining exports relative to where they would be without it. The depreciation would also encourage Australian households to spend more on local goods and less on what would be dearer imports. This should lead to higher wages, increased household incomes and spending, and improved economic growth. In fact, MARTIN predicts that, by boosting economic growth, quantitative easing would actually lead to higher interest rates as inflation returns to the Reserve Bank’s target, allowing interest rates to return to more normal levels. Read more: We asked 13 economists how to fix things. All back the RBA governor over the treasurer[6] Combining these two effects, MARTIN suggests a large quantitative easing program would reduce unemployment by 0.3 percentage points, equivalent to 40,000 extra jobs, and boost wages across the economy. The output of any model is only as good as the information and data that are fed into it, but the output of MARTIN is why more and more economists expect the bank to quantitatively ease in the new year. Its brain says it should work.