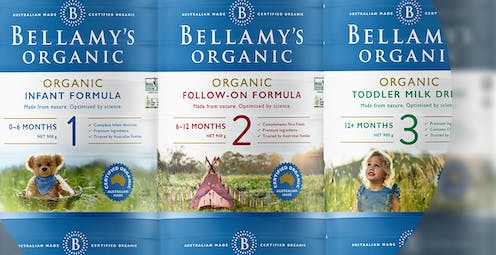 Strict, legally enforceable conditions, have been set by the treasurer, which have provided critics with a degree of reassurance, although the decision still came under some fire when it was announced on Friday.

Frydenberg indicated he acted on the basis of a unanimous recommendation from the Foreign Investment Review Board.

Bellamy’s sells into China but has had trouble getting the needed Chinese approval for its formula to be sold in retail outlets there, in a period of significant change to China’s dairy industry.

Ups and downs ahead of takeover

It achieved some brand recognition when its product was bought in local supermarkets and shipped to China through daigou, a micro export channel of individual and small buying operations.

Mark Harrison, senior lecturer in Chinese studies at the University of Tasmania, told The Conversation Bellamy’s performance had been “up and down” and it had been through significant management upheavals in recent years. These had opened the possibility of a takeover.

It had brand value but the failure to run a consistent business would have made it an attractive target for the Chinese company, Harrison said.

Frydenberg said the approval “will ensure Bellamy’s can continue to support jobs in Australia and strengthen its ability to expand its domestic market as well as its export opportunities, particularly into the growing Asian market.

"The decision will also provide opportunities for the suppliers that contribute to Bellamy’s products, including Australian dairy farmers.”

• a majority of Bellamy’s board to be Australian resident citizens

• maintenance of its headquarters in Australia for at least ten years; and

• an investment of at least $12 million in establishing or improving infant milk formula processing facilities in Victoria.

Frydenberg said the conditions would ensure that Bellamy’s maintained its presence in Australia, and that Bellamy’s proceeds with previously announced investment in infant milk formula processing facilities.

He pointed out the conditions were legally enforceable.

Although Bellamy’s is a relatively new company with a limited physical presence in Australia, … it has achieved a very important role in the supply of high-quality baby formula for Australian consumers.

Wilkie warned against “a repeat of the farcical sale of the Van Diemen’s Land Company, where foreign buyers promised the world but failed to deliver on just about any of it.

The Foreign Investment Review Board must be sure that the Bellamy’s approval is accompanied by an ironclad guarantee that Australian jobs will be maintained, and that the continued supply of baby formula to Australian markets is not interrupted.

Greens Treasury spokesman Peter Whish-Wilson, also from Tasmania, said the decision was regrettable but he highlighted the conditions.

"We welcome the decision to apply binding and enforceable conditions on the sale of Bellamy’s such as compelling local investment and employment”.

Whish-Wilson said Frydenberg’s move “clearly acknowledges the problems with the previous controversial Van Diemen’s Land approval where promises were voluntary and have not been implemented”.

Pauline Hanson slammed the decision. “Stop, just stop! Enough with the rampant sell off of Australia,” she said on Facebook.

She said this took “another chunk out of Australia’s ability to produce enough food for our own people”.

Shadow treasurer Jim Chalmers said it was up to Frydenberg to explain how and why the the decision was in the national interest.“We need to know more about the undertakings that have been given and that they’ll be followed through”.

Former Nationals leader Barnaby Joyce told the Australian he was “disappointed to see yet another piece of Australia sold to the Chinese” but pointed out Bellamy’s was not a monopoly.

He emphasised that there should not be slippage in the application of the conditions.